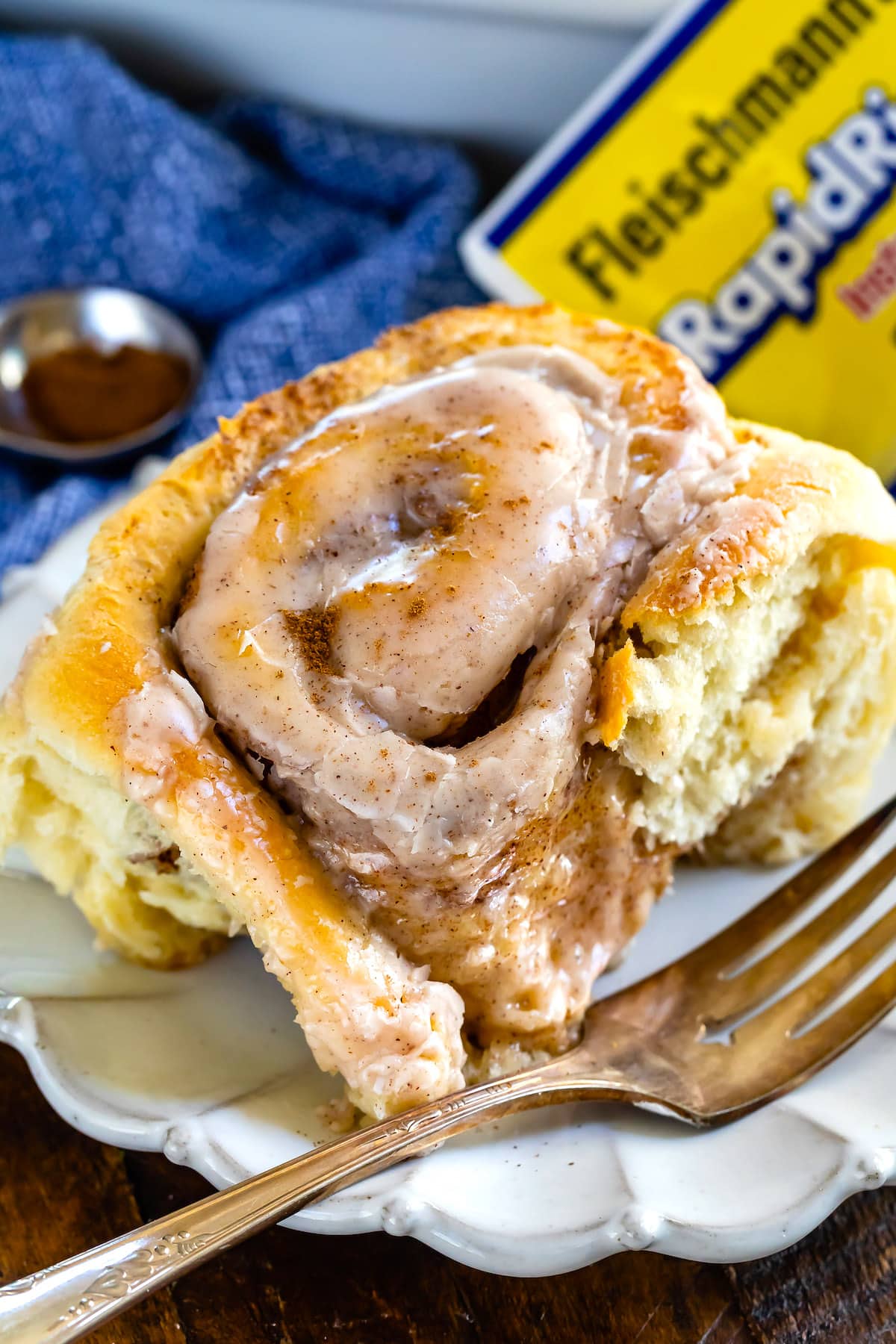 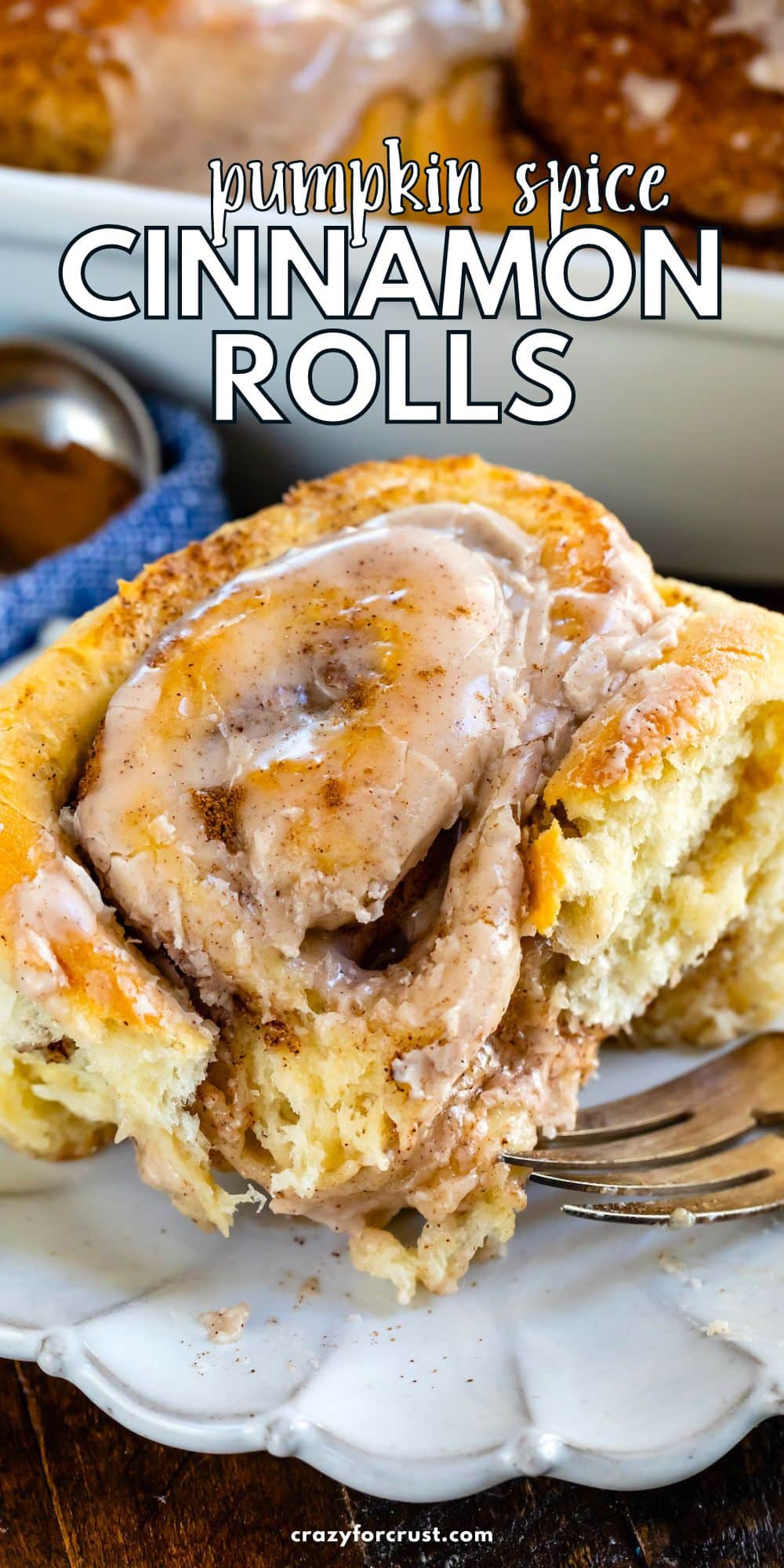 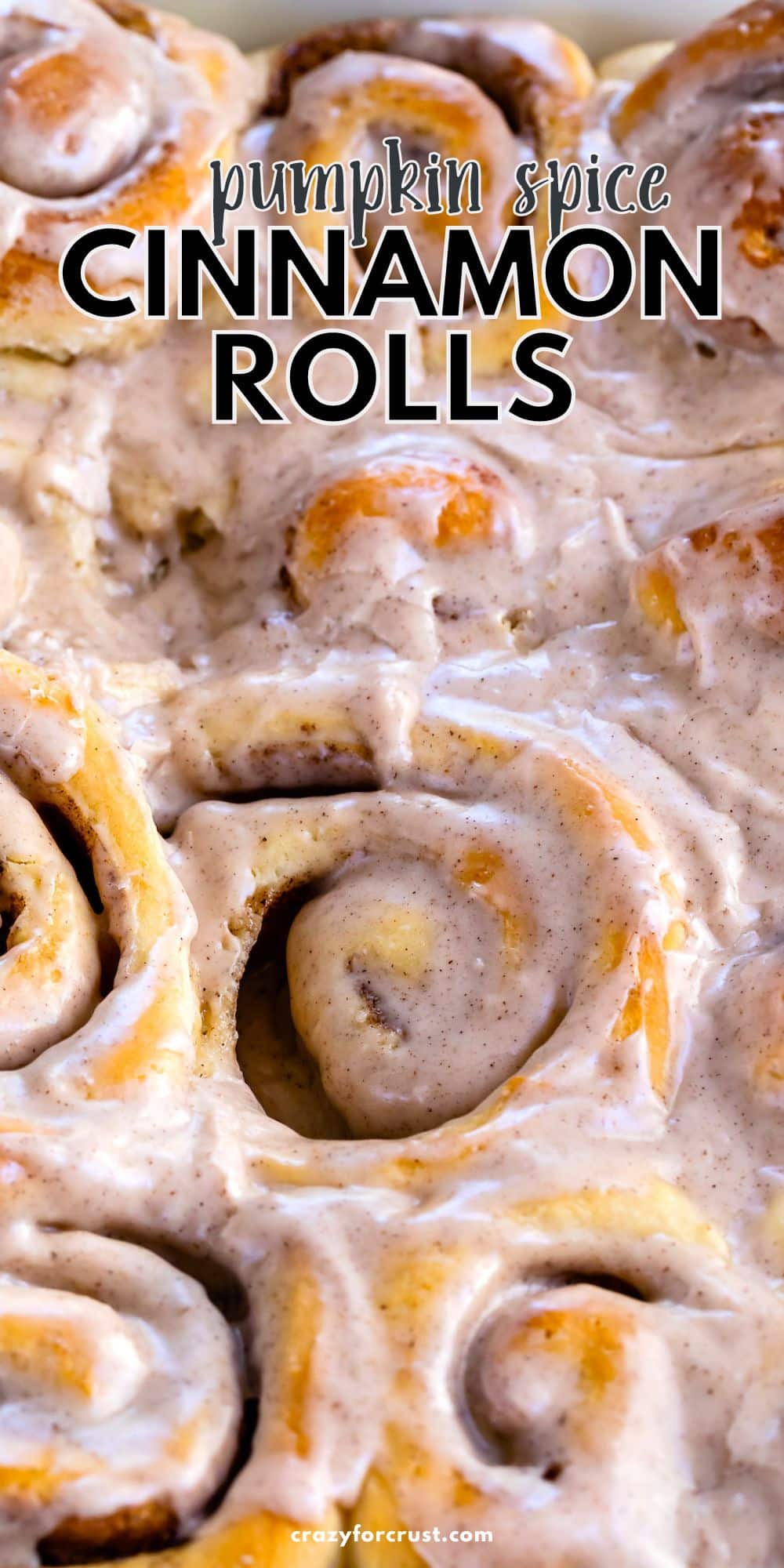 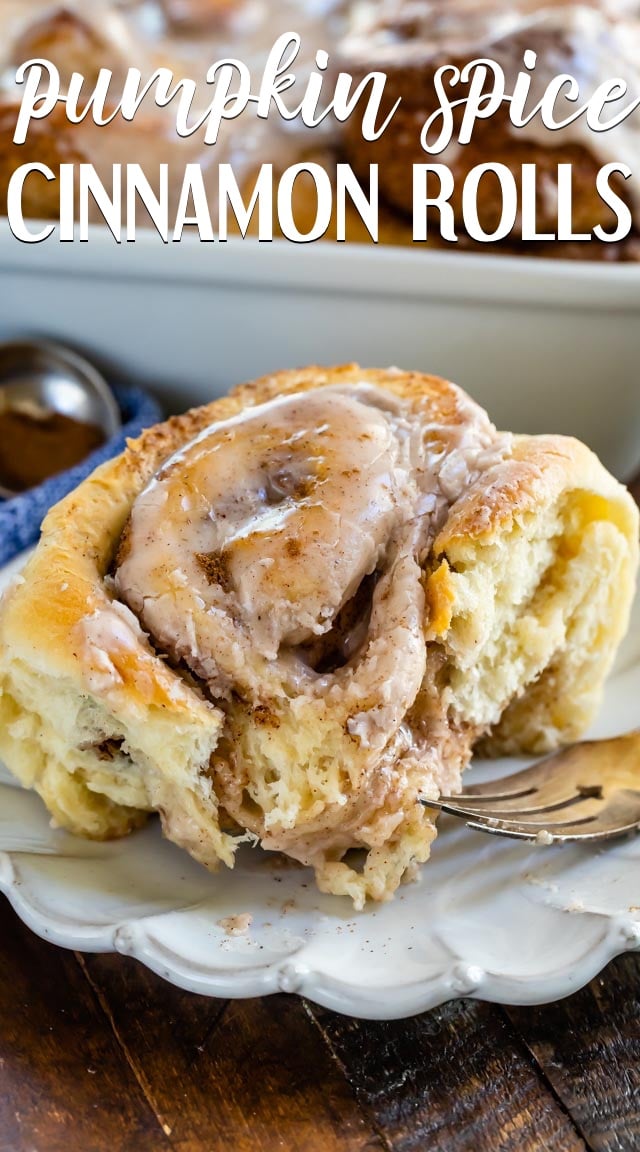 There really is nothing I like more than a hot and fluffy homemade cinnamon roll. The sweet and fluffy dough, the cinnamon filing, the frosting – it’s pure heaven to me. I’m pretty sure cinnamon rolls are in my top 5 foods, along with pie and brownies.

I have so many cinnamon roll recipes on this site because they’re so much fun for me to make. I love switching up the fillings (making them lemon rolls or into gingerbread flavor) because a rolled out dough is such a fun blank canvas to work with. When I was thinking about new flavor ideas, I decided to take the spice of the season – pumpkin pie spice – and devote a cinnamon roll to it!

Pumpkin Spice Cinnamon Rolls are made from scratch with a warm fall filling and pumpkin spice frosting! I’m showing you how to make yeast rolls from scratch step-by-step with photos and a video so you can do it – NO FAIL!

What kind of yeast do you use for cinnamon rolls?

When you’re shopping for ingredients, you’ll see a few kinds of yeast at the grocery store, but you just need to remember one kind: Fleischmann’s® RapidRise® Yeast.

RapidRise® Yeast is also known as instant yeast. It saves time because:

How to make cinnamon rolls from scratch

How do you knead dough?

Kneading is the process where you push the dough with the palm of your hands. There is science behind kneading the dough, but just know that it creates that delicious homemade bread texture you love.

I actually love to knead; the process is calming and there’s something so special about homemade recipes that take extra work, you know?

You’re going to knead your dough until it’s slightly elastic and it passes the two-finger test: the dough will spring back when you press it with two fingers.

There are so many different kinds of frosting you can use on cinnamon rolls, but I love this easy pumpkin spice icing.

How do you know your water is the right temperature for yeast?

I love using an instant-read thermometer, or you can think “hot bathwater.” Time will depend on your microwave. I usually heat 1 1/2 cups of water for cinnamon rolls in my microwave between 1 1/2-2 minutes to reach that temperature.

How much flour do you add to homemade cinnamon rolls?

You’ll notice that I give a range of flour amount. Humidity and temperature can affect how much flour you’re using. (Also, be sure you’re measuring flour correctly.) The time it takes to mix the dough will depend on the mixer you’re using.

Why didn’t my cinnamon rolls rise?

1. Your yeast was old – be sure to check the expiration date. 2. The water wasn’t the correct temperature – which is why I recommend a thermometer!
3. Make sure you used the correct yeast (instant not active dry).

How do you know when cinnamon rolls are done?

They’re done baking when they’re golden brown and cooked through.

How long can you keep cinnamon roll dough in the fridge?

Can I make this dough in a bread machine?

Store tightly covered on the counter for up to 3 days. You can freeze the rolls (baked or unbaked) for up to 2 months.

You can freeze the baked rolls to reheat in the microwave. Or make the rolls and place them in the pan. Cover tightly with plastic wrap and freeze unbaked. Thaw in refrigerator and allow to rise on the counter until doubled in size, then bake as directed.

Can I make the rolls ahead of time?

Make these 24 hours ahead and store in the refrigerator (in pan, unbaked) and allow to rise at room temperature while preheating oven. 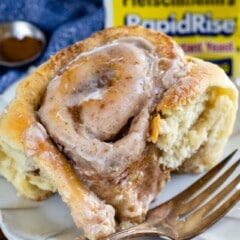 5 from 2 votes
Homemade Pumpkin Spice Cinnamon Rolls are so easy to make even if you've never worked with yeast. These rolls are made from scratch and filled with pumpkin spice instead of cinnamon – and the frosting has the warm pumpkin pie spice too!
Prep Time 1 hour 40 minutes
Cook Time 30 minutes
Total Time 2 hours 10 minutes
Yield 12 rolls
Serving Size 1 roll
Save RecipeSaved!Rate RecipePrint Recipe

This recipe is slightly adapted from Fleischmann’s® Yeast website, where they have 150 years of baking experience. This is a tried and true recipe you’ll be proud to share! This post was sponsored in 2019 but has been updated.

Other easy recipes made with yeast:

Other recipes perfect for brunch:

Pumpkin Spice Cinnamon Rolls are going to be the hit of brunch or your holiday breakfast. Working with yeast is easier than you think, so be sure to give it a try!