If you’re throwing a Super Bowl or football party, you need to know how to make Football Brownies! This easy recipe uses a homemade brownie mix recipe and is topped with an easy football decoration. These are touchdown brownies without a cookie cutter and everyone will love them.

Plus, brownies are a bonus. Who doesn’t love homemade brownies?

There are two times a year I make football themed treats: in August, for my husband’s Fantasy Football Draft, and in January, for the Super Bowl. The big game is in less than two weeks, so the food football planning is running high in my house. (Mainly for the blog, Mel doesn’t allow us to watch the game with him, lol.)

I don’t love watching football (or any sports, really) but I do love football food. Football food is pizza and punch, cheesy dip and peanut butter dip…and football themed desserts!

This year I just have no real energy to be creative and come up with some new football shaped creative dessert. I was thinking about what to make and decided I just wanted to do EASY this year: football brownies. I figured I wouldn’t post these because they’re so easy they’re barely a recipe. Then I started thinking…I bet other people out there are busy, crazed, tired, and don’t want to do anything fancy for the super bowl. Raise your hand if that’s you!

Stupid Easy Homemade Football Brownies are for anyone who wants something that’s so simple it’s foolproof, yet cute and festive. Plus, if you’ve ever wondered how to make football brownies without a cookie cutter…this is your resource.

Best Brownies To Use

I absolutely love a plain old easy brownie. I even love the ones from a box; in fact I crave them sometimes. Box brownies are the ones I grew up on, so of course I have an affinity for them. Funny story, last week I went to a party and brought a cake. The host had asked if I was planning to bring something because she didn’t want to “subject me to her boxed brownies” and I was like, dude, bring them on!

The problem I have is that I always want a box of brownie mix when I don’t have one. Usually it’s the day after I’ve been to the store so there is no way I want to go back…so I end up having to make them from scratch anyway. My last-minute-brownie-craving problem led me to create the BEST Homemade Brownie Mix recipe a few years ago. It’s still one of my absolute favorite recipes and it’s always in my pantry. Sometimes I make a full pan of them, but most often I make a single serving brownie because I have a craving.

How to make Football Brownies

To turn these into touchdown brownies, all you have to do is add laces to the cut squares. Sure, you can use a cookie cutter, but I never know where mine is. They still look like footballs even if they’re not in a football shape. (At least I think so…please don’t burst my bubble, lol.)

Homemade Football Brownies will score a touchdown at any super bowl party because they start with homemade brownie mix!

What you need to make Football Brownies

Once your brownies are baked and cooled, it’s time to slice them and pipe the laces. You have a few options for this:

If you want to go full homemade, use my vanilla frosting recipe. But if you’re really going for easy, then use a can. All you have to do is place some frosting in a sandwich bag and cut off one corner. Then pipe your laces.

(Confession: I have no idea how many laces go on a football. I do three because…it looks cute.)

Tips for how to make football brownies: 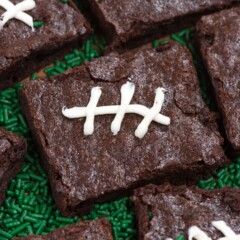