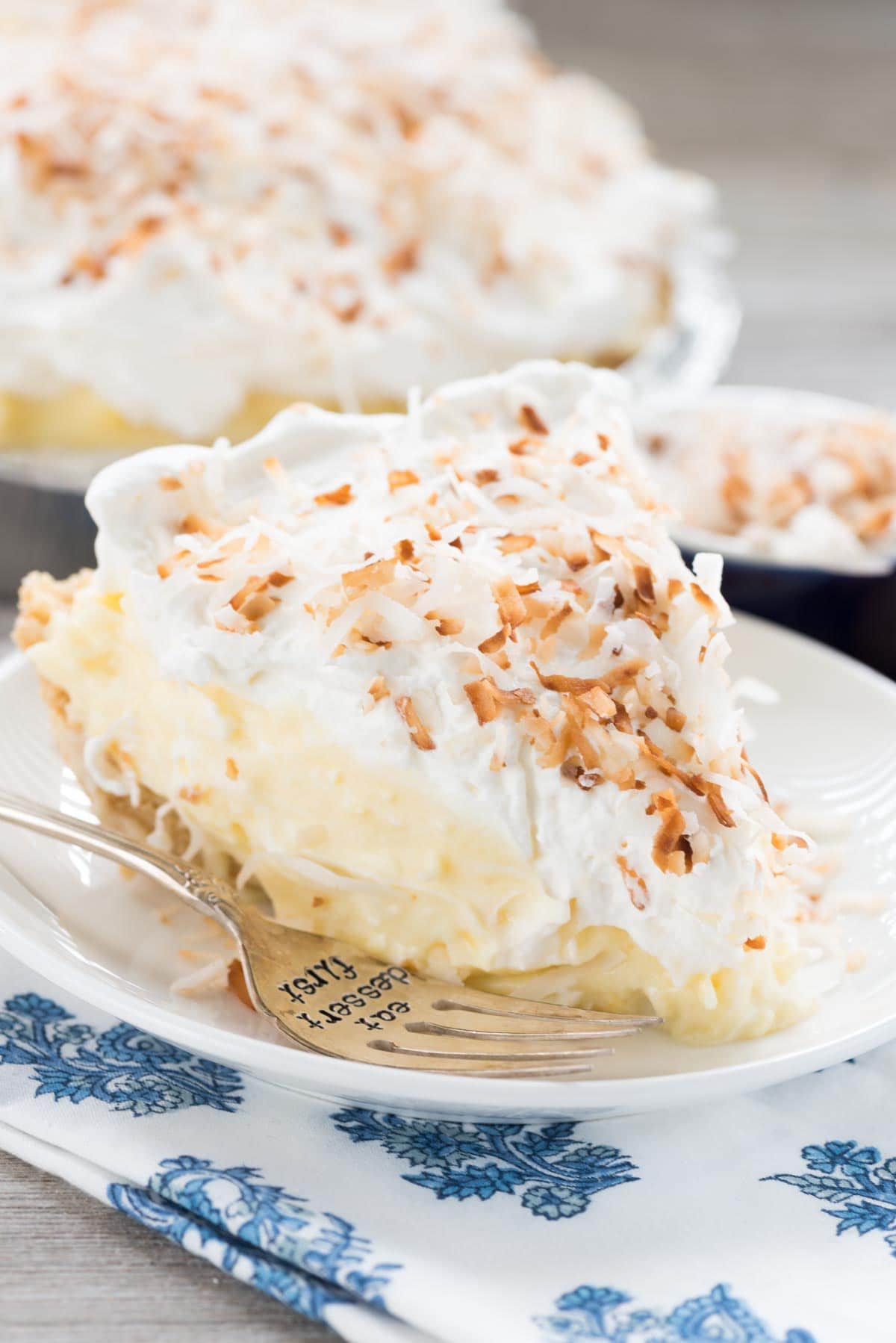 No Bake Coconut Cream Pie – this EASY no bake pie recipe is full of coconut pudding, fresh whipped cream, and a Golden Oreo crust! This pie goes down so easy!

And boy does this no bake coconut cream pie go down easy! One slice turned into two turned into getting it out of the house, because two would have become the entire pie. I have no self-control when it comes to no bake pudding pies. The crunchy cookie crust, the creamy pudding, the whipped cream…they’re so light you don’t realize you’ve eaten too much until it’s too late.

That reminds me of something I’ve realized about myself that’s different than a lot of people. I only realized it after watching Jordan, when I realized she’s the same as me. My husband can’t understand why we’re always talking about or thinking about or eating food and it dawned on me that the way Jordan and I are is the minority. We think about food all the time. Ever since I was a little girl, I remember doing this. It started way before thinking about food was my job (but way to parlay that skill, am I right?).

I’m not joking when I say I think about it all the time. It’s not an exaggeration. I literally think about food 99% of my waking moments. When I get up I think about what I’m going to eat for breakfast. When I’m working out, I think about how many hours it is before it’s acceptable to eat a snack. I think about what I’m going to have for lunch, snack, dessert, dinner…constantly. I do it when I’m hungry but also when I’m not. It’s probably the reason I’m an emotional eater and a bored eater: because food is never far from my brain. I swear I was a smoker or something in a past life, with an oral fixation that manifested itself into food in this life.

When my husband complains about Jordan always looking in the pantry or thinking about what’s for dinner, I have to explain to him she comes by it honestly. I don’t know how to turn off my constant thinking about food (believe me, I’ve tried) but since I’ve kind of built a business on it…I guess it’s an okay thing.

Speaking of which, it’s now 12:05pm as I write this, and that means it’s socially acceptable to eat lunch, so let’s wrap this thing up.

So…PIE. NO BAKE COCONUT CREAM PIE, with a GOLDEN OREO crust. Just hand me a fork, no plate required. 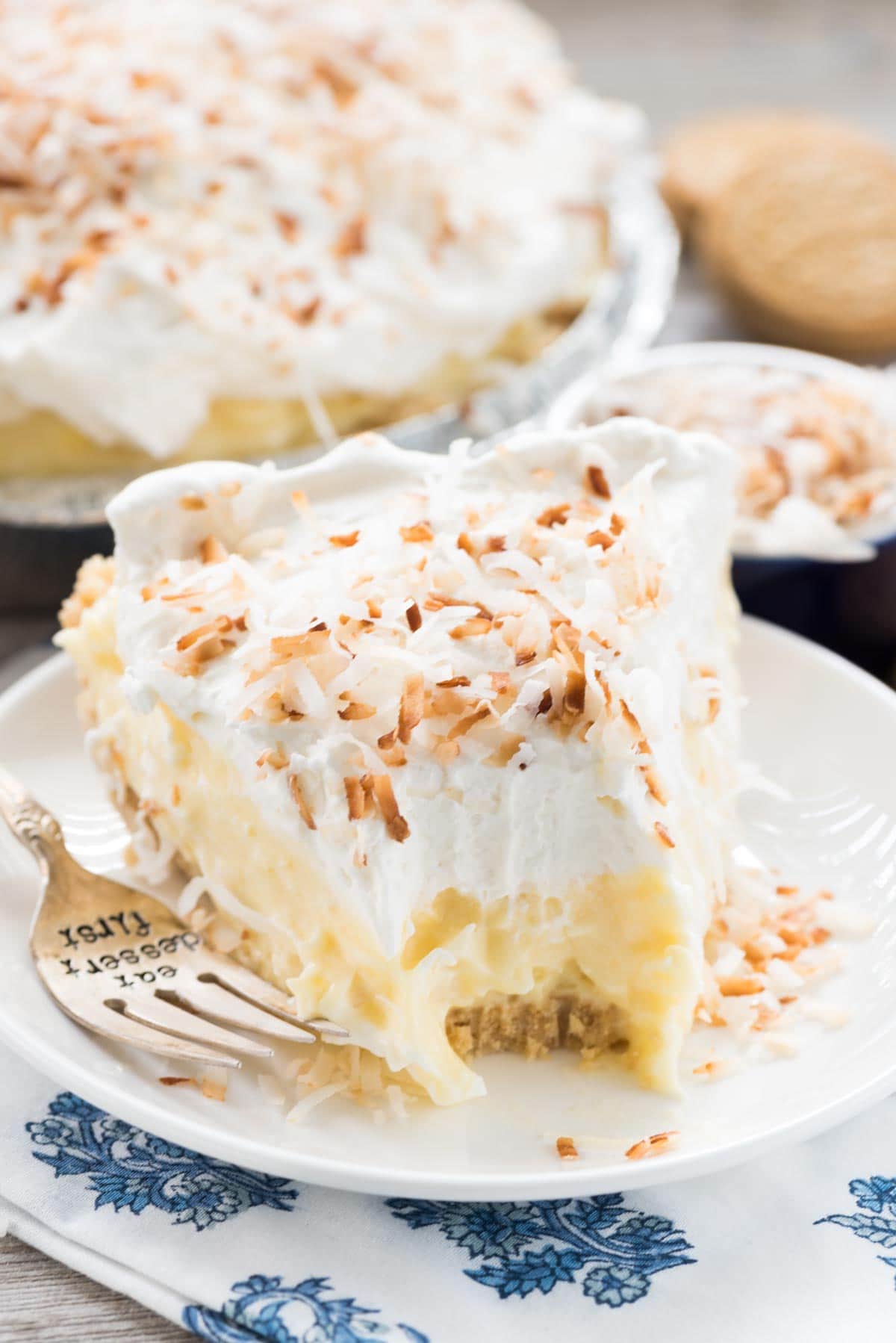 This cream pie is a marriage of a few things on this blog. It starts with my favorite Oreo Crust recipe, and I used Golden Oreos. That crust recipe works with ANY flavor Oreo and I think that the sweet vanilla taste of a Golden Oreo pairs perfect with coconut. You could also use a shortbread crust or a graham cracker crust, if you prefer – all of my cookie crust recipes are no bake. If you’re going to the trouble of making a pudding pie, why on earth would you want to bake it? (It’s why I love my Coconut Banana Cream Pie recipe, but I often make it with a cookie crust instead of pastry!)

The filling of the pie is Instant Coconut Pudding Mix. I’ve seen that flavor at 99% of grocery stores, but if you can’t find it, substitute vanilla and add 1 teaspoon of coconut extract. Then you stir in shredded coconut and pour it into the crust. Let it set, then you top it with fluffy whipped cream and tons of toasted coconut.

If you’re not sure how to make toasted coconut, don’t worry, I’ve got you covered. I just posted my first Cooking Basics video tutorial, and it’s all about making toasted coconut.

The hardest part about making this coconut cream pie recipe is not eating it all.

Darn, now I’m thinking about lunch AND this no bake coconut cream pie. Sometimes my job is a curse!

No Bake Coconut Cream Pie - this EASY no bake pie recipe is full of coconut pudding, fresh whipped cream, and a Golden Oreo crust! This pie goes down so easy!
4 from 4 votes
Yield 10 -12 servings
Serving Size 1 /10 Slice of Pie 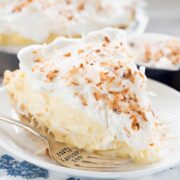 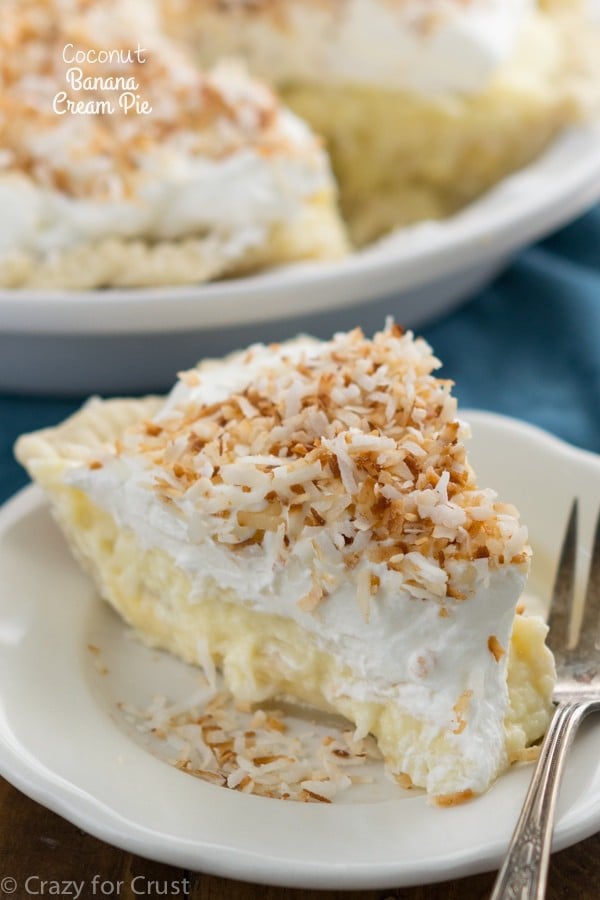 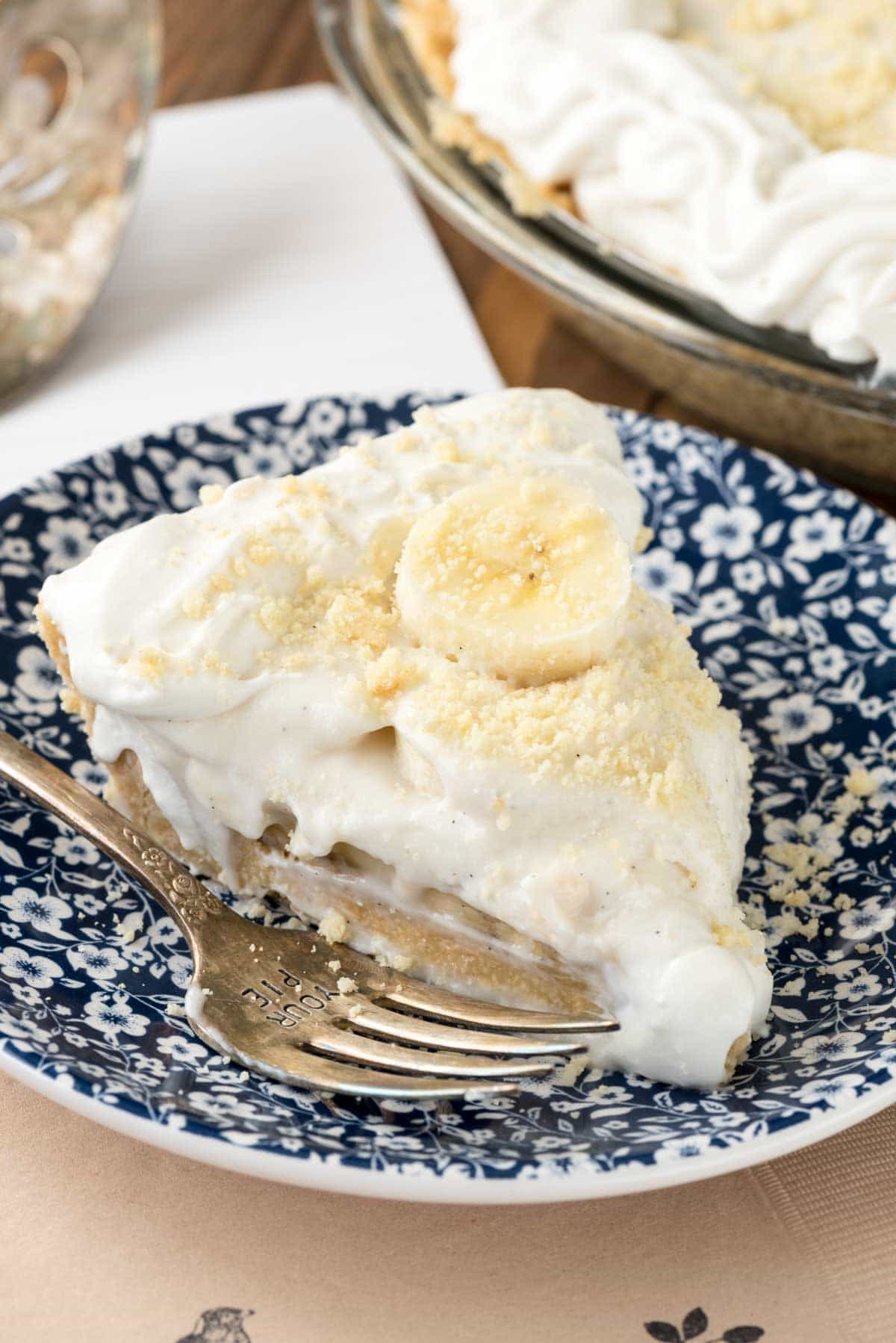 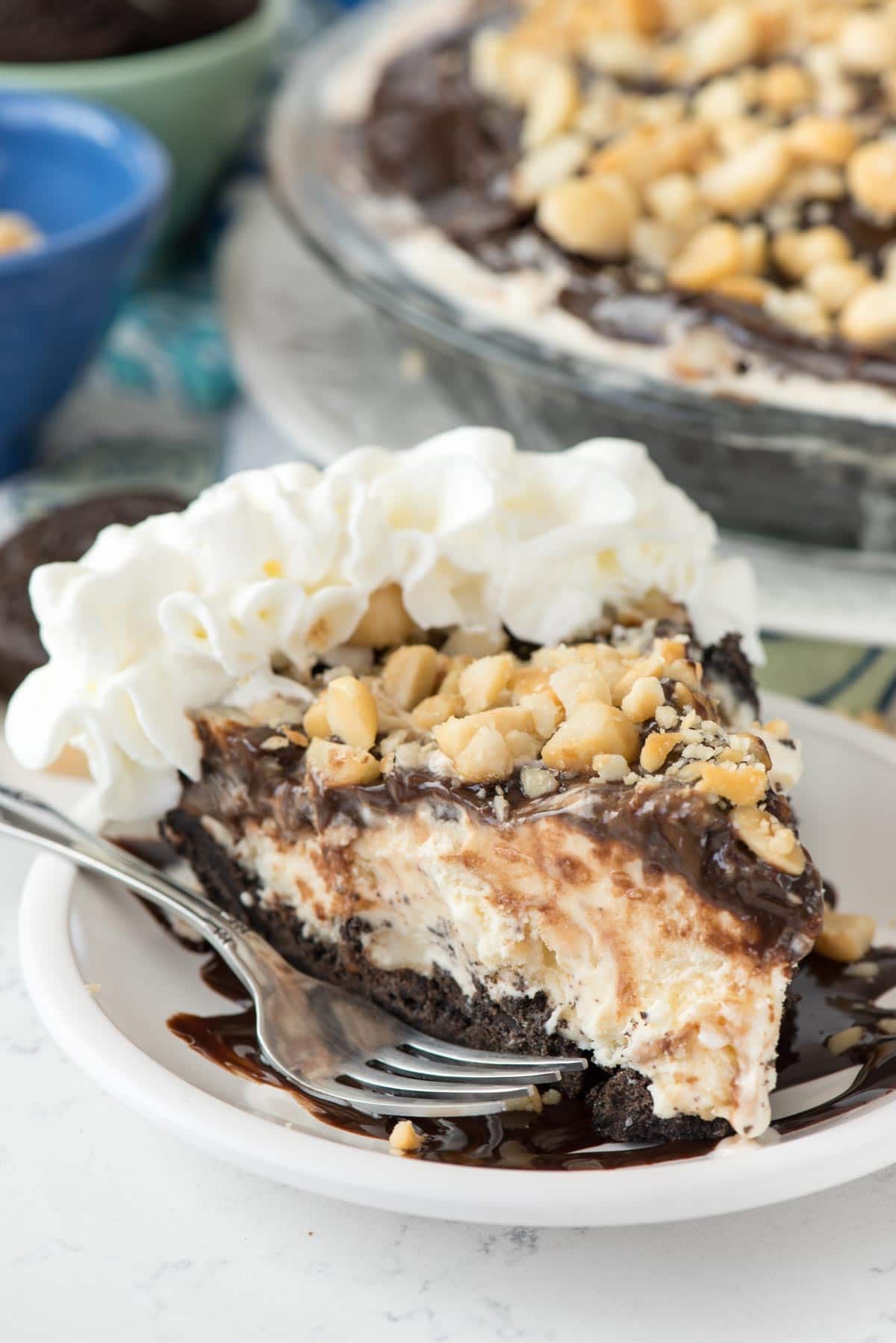 If you love my no bake coconut cream pie, here are some more fun no bake pie recipes to try:
No Bake Chocolate Pie by Oh Sweet Basil
No Bake Blueberry Lemon Cream Pie by Mom on Timeout
No Bake Key Lime Pie Bars by Sugar Free Mom