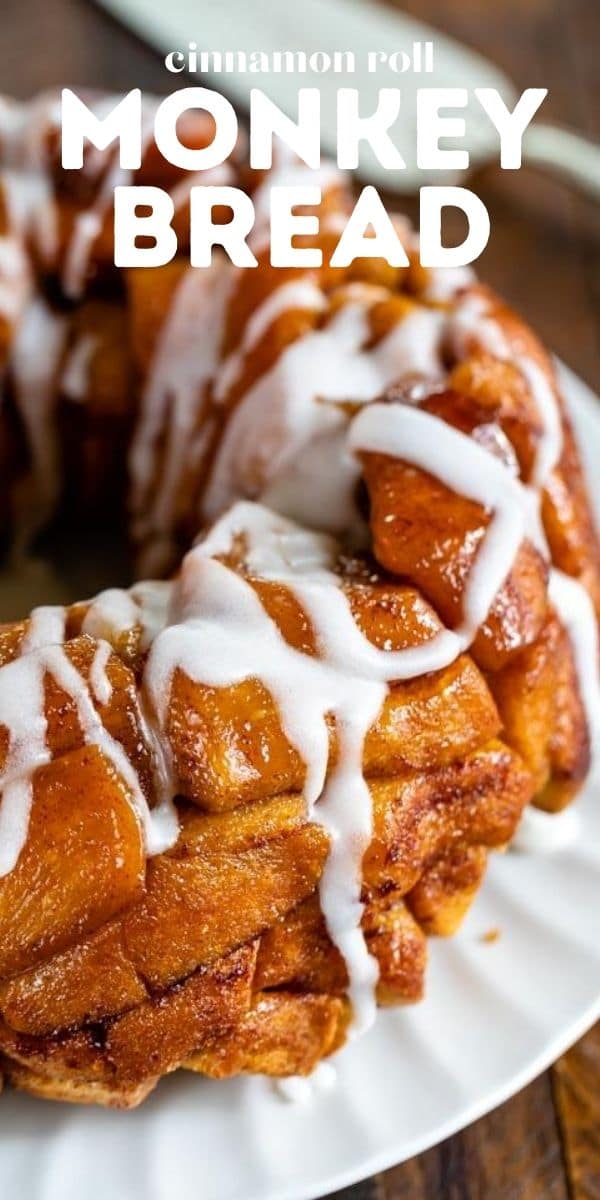 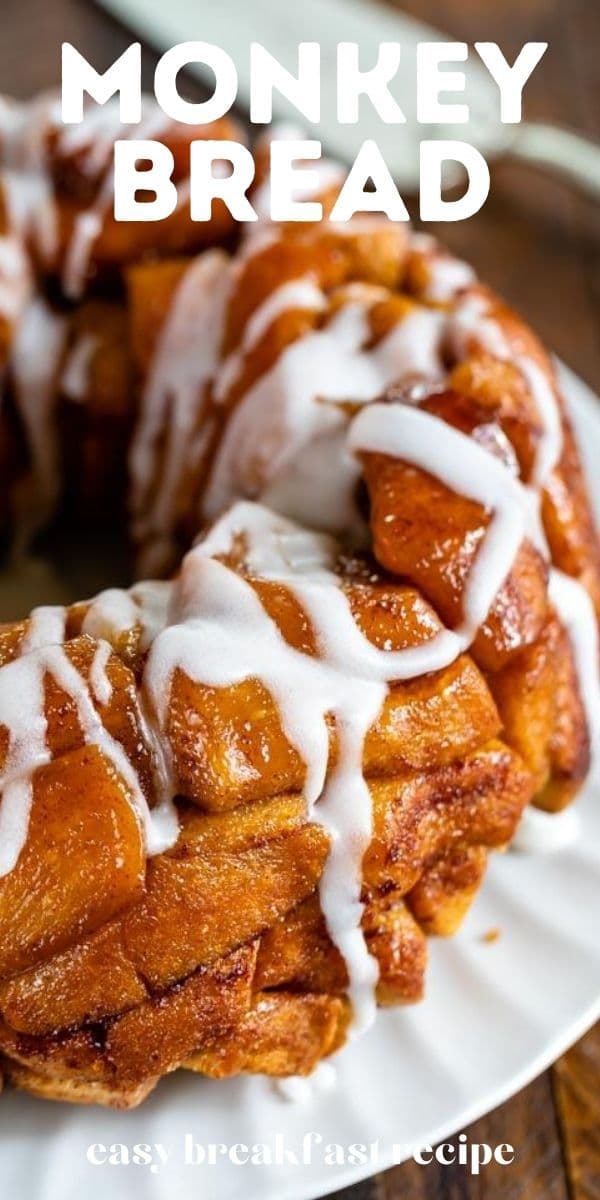 You can make Easy Monkey Bread with cinnamon rolls, did you know? This is the perfect fancy or holiday breakfast and using canned cinnamon rolls just makes them even better.

We’ve been making this recipe for Christmas morning breakfast for over 10 years and we look forward to every bite!

When Jordan was four I decided to make Monkey Bread for Christmas morning breakfast. I’d made pancakes the year before and spent an hour flipping while everyone else relaxed and drank coffee, so I wanted something I could make ahead of time and just pop in the oven.

After searching the internet, I discovered the original recipe for this on the Pillsbury website. It used canned biscuits (easy!) and could be partially assembled ahead of time. I made it for brunch and everyone loved it – especially Jordan.

Now, over 10 years later, she still requests monkey bread on Christmas morning. (She also requests it on other holidays and random Tuesdays, ha!) Even if I want to make cinnamon rolls, I have to make them alongside monkey bread.

I’ve adapted the recipe to fit our likes and tastes over the past decade and this is the BEST Monkey Bread Recipe you’ll ever make!

My Monkey Bread recipe is even better, because it’s easy and starts with CINNAMON ROLLS instead of biscuits. It’s easy to spice up canned cinnamon rolls by making monkey bread with them!

Why is it called monkey bread?

This delicious breakfast pastry got its name because you can pick it apart with your fingers, like a monkey would. Most commonly associated with Pillsbury at this point, Monkey Bread is actually a descendant of a Hungarian dessert.

Monkey bread is a pastry that’s made with small balls of dough rolled in cinnamon sugar and piled in a bundt pan. It’s then topped with melted butter and brown sugar and baked until a flaky, doughy sweet pastry forms.

Pillsbury made this an easy recipe by using it’s canned biscuits for the dough, but you can make monkey bread from scratch (which I’ve done – it’s delicious). As much as I love the homemade version, I also love a semi-homemade easier version for holidays!

How to make Cinnamon Monkey Bread

Do you have to make monkey bread in a bundt pan?

Nope! I did for this post but I’ve made monkey bread without a bundt pan so many times. You can use:

The bread bakes faster with each smaller pan, so if you’re trying to bake up breakfast quickly, use one of those three instead of the bundt pan.

Remove the bread from the pan within 10 minutes of it coming out of the oven so it doesn’t stick to the pan!

How do you serve cinnamon roll monkey bread?

I like to drizzle the icing that comes with the cinnamon rolls over the top for a nice added flavor and look. Monkey bread tastes best warm and gooey from the oven. Monkey bread doesn’t have to be served warm, however. It tastes good room temperature too; that’s how we enjoy any leftovers!

How do you make monkey bread without a bundt pan?

Use 2 pie plates, 2 loaf pans or a 9×13-inch baking dish to bake your monkey bread instead of a bundt pan.

How to store leftover monkey bread?

Store it in an airtight container for up to 3 days. Microwave to reheat.

Can you make monkey bread with Pillsbury Grands ahead of time?

You can prep this up to 24 hours ahead. Cut the cinnamon rolls and toss them with cinnamon sugar then store in the refrigerator. When ready to assemble, melt the butter and mix with brown sugar and place everything in the pan.

Making my Monkey Bread recipe with cinnamon rolls instead of biscuits will make your family so happy at breakfast time!

Have you tried this recipe?

Give it a 5-star rating below! 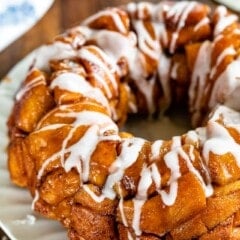 5 from 8 votes
This Easy Monkey Bread Recipe is made with cinnamon rolls instead of biscuits. It's a semi-homemade recipe that can be made with or without a bundt pan – it's the best breakfast or brunch recipe!
Prep Time 10 minutes
Cook Time 50 minutes
Total Time 1 hour
Yield 10 servings
Serving Size 1 serving
Save RecipeSaved!Rate RecipePrint Recipe

We always serve this with fruit, bacon and an egg casserole:

Easy Monkey Bread with cinnamon rolls is my favorite way to make this classic recipe! Pillsbury Cinnamon Rolls make this an easy semi-homemade recipe. You can make this with or without a bundt pan and it’s the perfect breakfast or brunch recipe.