This Coconut Chocolate Pie is inspired by my favorite candy bar – an Almond Joy! It’s a homemade pudding pie with a chocolate cookie crust that’s so cool, creamy and decadent everyone will fight over the last piece! The pie filling is made with homemade coconut and chocolate pudding that takes less than ten minutes to make – plus you can make and assemble the pie ahead so it’s ready to slice and serve later!

Awhile back, I asked on Facebook which pies I should make this month and French Silk and Coconut Cream were the top two requests. So, of course, I thought – how about making one outrageous dessert out of two?

I took those two requests and turned them into one ultimate pudding pie that I’m calling Coconut French Silk Pie and, let me tell you, this pie is FABULOUS. Think of it as an Almond Joy candy bar (also known as the best candy bar ever!) in chocolate pudding pie form.

Homemade coconut pudding layered with chocolate pudding in a chocolate cookie crust. Need I say more? Well, there is more! Add some whipped topping, sliced almonds and toasted coconut nut and you get a decadent chocolate coconut pie that’s part French Silk, part Coconut Cream and is best described as dessert bliss. Don’t we all deserve a little dessert bliss?

This pudding pie recipe has three parts: the Oreo cookie crust, the homemade pudding pie filling, and the topping. It’s a great pie for entertaining because it needs to be made a day ahead in order for it to chill and set. Don’t you love a make-ahead dessert? It makes the holidays and other celebrations so much easier!

Since we’re going for an Almond Joy/French Silk/Coconut Cream pie mash-up with this pudding pie, I opted to make an Oreo Crust with some coconut and almonds mixed in. To make it, you’ll need:

Combine all of the crust ingredients in a food processor and pulse until they break down into fine crumbs. Transfer them to a bowl, add the melted butter and mix to combine.

Pour the mixture into a pie plate and gently press it into an even layer along the sides and bottom of the pie plate. Bake the crust for 20 minutes at 350 degrees or until it’s set.

How to Make Homemade Pudding for Pie

Once the crust is ready, make the pudding. I know it’s tempting to use the instant pudding you can buy in those little boxes at the store, but let me just say – homemade is so much better! Yes, you need a few more ingredients and a few more minutes to make it, but it only takes about 10 minutes. So worth it.

We’re basically making a homemade vanilla pudding and turning it into chocolate pudding and coconut pudding. Here are the ingredients you’ll need:

First, whisk the milk, egg yolks, cornstarch, sugar, vanilla, and salt in a saucepan. At it heats up, whisk continuously for about five minutes. Once the mixture has thickened it’s ready!

We’re making two pudding flavors so at this point, divided the pudding base into two separate bowls. Stir the melted chocolate into one to make chocolate pudding and stir the coconut into the other to make the coconut pudding.

How to Assemble the Pudding Pie

Once you have the cookie crust and the pudding filling, you’re ready to assemble the pie.

When you’re ready to serve the pie, uncover it and top it with:

You can toast your coconut and almond on a baking sheet in the oven. Toast them at 350 degrees until they turn lightly golden. It only takes a few minutes so be sure to keep an eye on them otherwise they go from toasty to burnt pretty quick!

How do you store homemade pudding pie?

In the unlikely event there are leftovers, store homemade pudding pie in an airtight container (or wrap the pie plate in plastic). Pudding pie will keep in the refrigerator for two days.

What kind of crust goes well with pudding pie?

For this Coconut French Silk Pie, I like to use a chocolate cookie crust. You could also use a graham cracker crust, vanilla wafer crust, or a regular pastry pie crust.  Whatever kind of crust you use, just be sure to bake it first since the filling is a no-bake pudding pie filling.

Other pies that you’ll love:

Serve this pie after a holiday dinner! 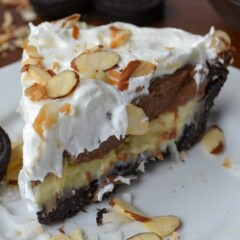 No ratings yet
This Coconut Chocolate Pie is inspired by my favorite candy bar – an Almond Joy! It’s a homemade pudding pie with a chocolate cookie crust that’s so cool, creamy and decadent everyone will fight over the last piece! The pie filling is made with homemade coconut and chocolate pudding that takes less than ten minutes to make – plus you can make and assemble the pie ahead so it’s ready to slice and serve later!
Prep Time 30 minutes
Chill time 2 hours
Total Time 2 hours 30 minutes
Yield 8 servings
Serving Size 1 serving
Save RecipeSaved!Rate RecipePrint Recipe

To toast sliced almonds and coconut, place on a baking sheet and bake at 350°F for a few minutes. Do not walk away from the oven – watch it closely! Store in refrigerator. Learn how to toast coconut and how to toast nuts! Recipe adapted from Martha Stewart.

Make homemade chocolate pudding and from scratch coconut pudding to put into this cream pie with an Oreo crust that has almonds in it! This pie is like an almond joy candy bar!