Apple Fritter Bread is a pull apart bread made with cinnamon rolls and filled with apples! This is the perfect dessert or breakfast treat and tastes just like an apple fritter doughnut.

Breads like this are dangerous in my house – we can never stop eating it!

Apple fritters always remind me of my mom. Whenever we’d get doughnuts when I was a kid, my mom would get an apple fritter. I really didn’t get it; I preferred blueberry or maple or something with sprinkles. Apple fritters were so not me…until I became an adult.

This Apple Fritter Bread is a pull-apart bread made with cinnamon rolls!

That’s right: I made pull-apart bread into apple fritter bread.

What is pull-apart bread?

To make apple fritter bread, I chose to use cinnamon rolls instead of biscuits. Apple fritters have a cinnamon taste on the outside with a doughy center and a delicious glaze to round it all out. This pull-apart bread has the same characteristics, but it’s baked instead of fried and only has 4 ingredients:

How do you make pull-apart bread?

I’m including a video in the recipe card, so you can get a visual of how it works. It’s really easy but written out can sound complicated or confusing. Basically, you start cinnamon rolls. I used Pillsbury, the basic 8-count (not Grands). Cut each in half horizontally, like you’re cutting a roll for a sandwich.

(Note: if you want to use Grands Cinnamon Rolls you can, just use one package and cut each roll into THREE pieces instead of two.)

Then you need the apples. I used Granny Smith because I like the tart apple with the sweet bread and frosting. Peel and core the apple, then dice it into bite sized pieces.

Why cook the apples?

Don’t worry, the apples aren’t chewy. You cook them before making the bread!

I really can’t stand chewy apples. It’s why I par-cook my apples for apple pie, and it’s why I par-cook them for this recipe. For this bread recipe, I simply cook the apples in a bowl in the microwave for just a few minutes. You just want them to soften a bit so they finish cooking in the bread, and so there isn’t as much moisture. Apples leak moisture as they cook, so par-cooking them gets rid of some of it.

Drain them well then mix with sugar and cinnamon.

To assemble the bread, you just have to layer slices of cinnamon roll with apples. Keep layering until you’re out of both and then place the stack in a bread pan. Bake until cooked through and then you use the frosting that came with the cinnamon rolls to glaze the apple fritter bread.

This recipe is really easy and delicious and perfect for fall! 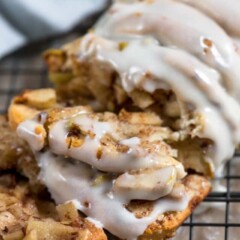 Easy Apple Fritter Bread is pull apart bread with apples and cinnamon rolls! Use Pillsbury for a semi-homemade quick bread that’s the perfect breakfast or brunch for fall baking.