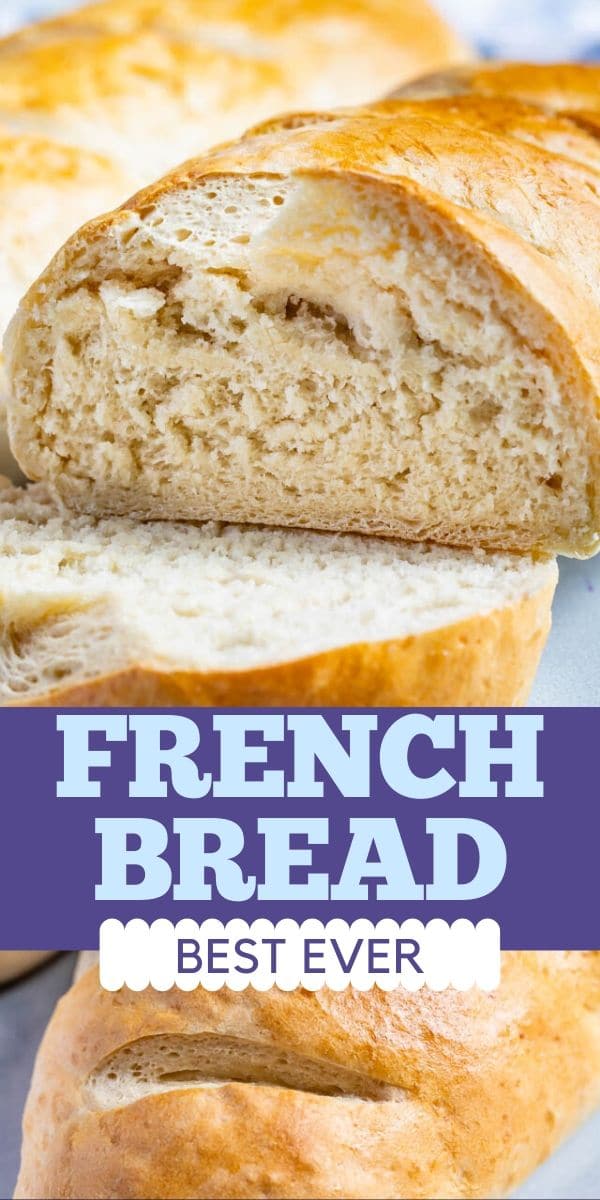 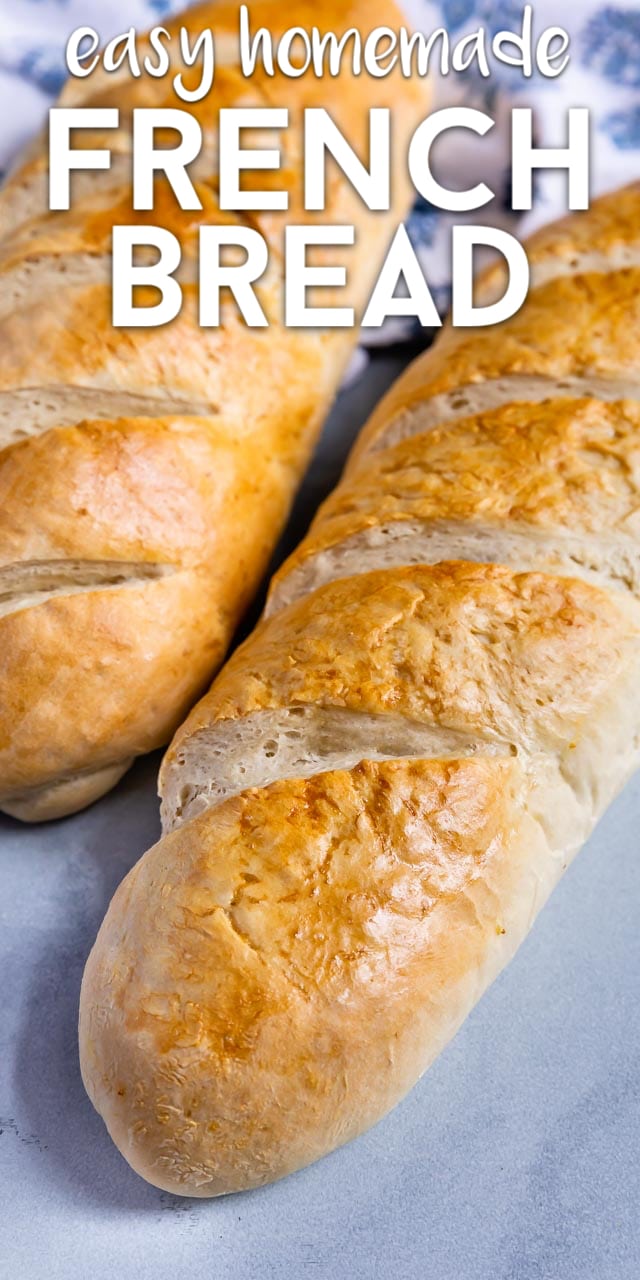 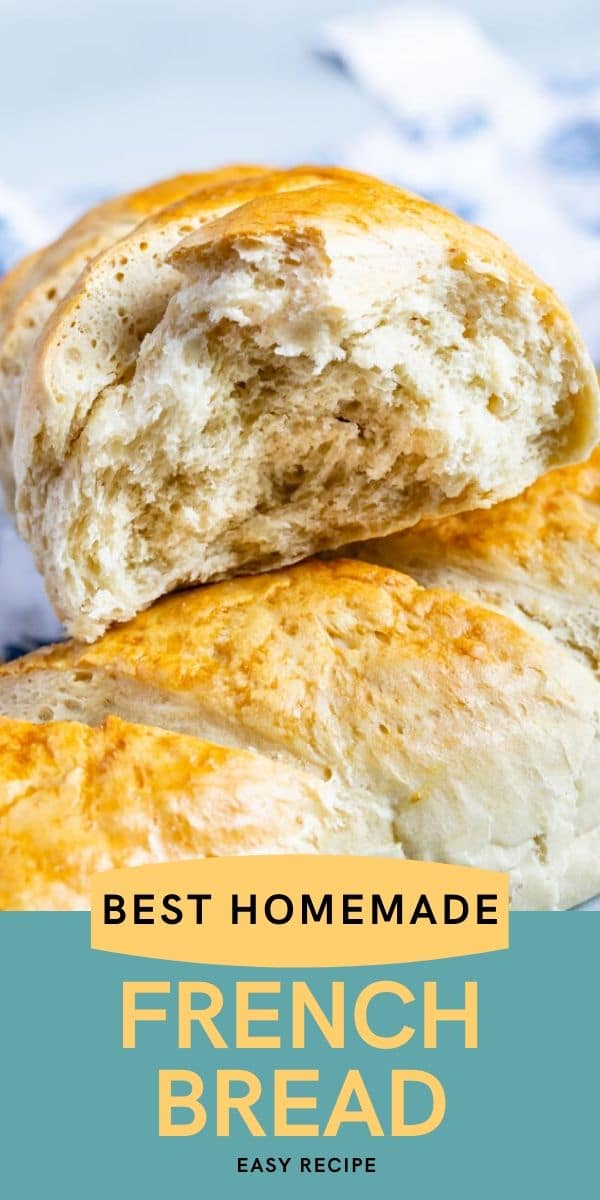 There is little in the world I like more than a warm slice of French Bread. This post is going to teach you how to make French Bread at home so you can enjoy it every time a craving hits. It’s the BEST one I’ve tried!!

I’m going to cover all the basics, from ingredients to process, and even how to get it nice and golden on top. You WILL be able to make your own French Bread when you’re done reading this!

The BEST French Bread is Homemade!

If I had to choose between dessert and bread and only eat one for the rest of my life, I’d have a huge struggle. Often, a nice thick slice of bread IS my dessert!

Making homemade bread has a few steps, but it’s actually easier than you think. If you follow this tutorial you’re going to have success making your own bread every time.

Rapid Rise (Instant) Yeast: My preferred yeast is Instant Yeast (I use Fleischmann’s Rapid Rise Yeast) because it cuts out half the rising time in bread recipes. Almost all yeast brands have an Instant Yeast, but they’re sold under different names (all will say “instant” somewhere on the package). If you can only find Active Dry Yeast, see the note in the recipe.

Oil: breads need fat to be moist and flavorful

An egg or egg white (for the egg wash)

How to make Homemade French Bread

We’re going to take this step by step:

First, whisk 1 cup of flour, salt and yeast in the bowl of your stand mixer. (You can do this by hand too, it will just take longer.)

Heat your water to between 120°-130°F. You need it at that temperature to activate your yeast. How do you know the water temperature? I recommend using an instant read thermometer (this is my favorite) because it’ll tell you exactly when it’s hot. But if you don’t have one, think hot bath water.

Run the mixer until the dough comes together. It won’t form into a ball, but it will be only slightly tacky to the touch.

That is what the dough looks like when you’re done mixing.

Then, turn out the dough onto a lightly floured surface.

Knead the dough until it’s elastic and forms into a ball. You’ll know it’s done kneading when it springs back when you press it with two fingers.

At this point, the instant yeast does it’s job: it only has to rest for 10 minutes. Cover and let it rest while you clean up.

After 10 minutes, it’s time for form your loaves of bread.

This recipe makes two loaves of crusty French Bread. After the 10 minutes resting time is up, divide the dough into two pieces.

Roll each out into a rectangle, then roll them up from the long side. Pinch the ends to form the loaf.

Place the loaves on your baking sheet and cover. Place in a warm area to rise until doubled, about 45 minutes.

After about 45 minutes, the loaves are nice and puffy. Now it’s time to prepare them for the oven.

How to Score French Bread

Use a sharp knife to cut shallow slits in the dough. You can also use a razor blade or a lame (the official name for a French bread scorer). Scoring the bread allows steam to release during baking, eliminating cracking and allowing for expansion.

Why brush bread with egg wash?

Egg wash gives the bread it’s golden color. You can also use the steam method (involving ice water in the oven) but that is more complicated and can cause oven problems if you’re not experienced. I find egg is easier.

Brush the loaves with egg wash. I used an egg white but if you want to use a whole egg, you can, just beat it first.

You’re going to bake the loaves for about 20-25 minutes, but if you want them nice and golden and crusty, make sure to re-brush them with egg-wash halfway through baking.

For a crusty golden loaf, do a second egg wash halfway through baking.

Once they’re baked, they’re golden and warm and the BEST French Bread ever!!

How to Store French Bread

Store this in an airtight container or bag for up to 2 days. Because there are no preservatives in this bread it will get stale and go moldy after a couple of days.

Can you Freeze French Bread?

Yes! You can freeze the freshly baked loaf – just let it cool first then wrap it with plastic wrap and freeze for up to 2 months.

Can I half the recipe to make one loaf?

Yes you can – I’ve done that and it works just fine. You can also double it to make 4 loaves.

Can I use active dry yeast?

This recipe needs the instant yeast – any brand – and if you want to use active dry yeast you’ll need a different method/recipe. I haven’t tested this with active dry as of this writing.

Can I make French bread without a mixer?

You can definitely make this by hand, just know you’ll need to knead it longer to get it smooth and elastic.

Serve this French Bread with: 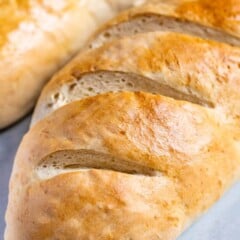 French Bread is a crusty bread that can be used as a dinner side dish or to make French bread pizza or garlic bread! And making it from scratch is easier than you think – I have a full photo tutorial and tips in the post on how to make this bread!