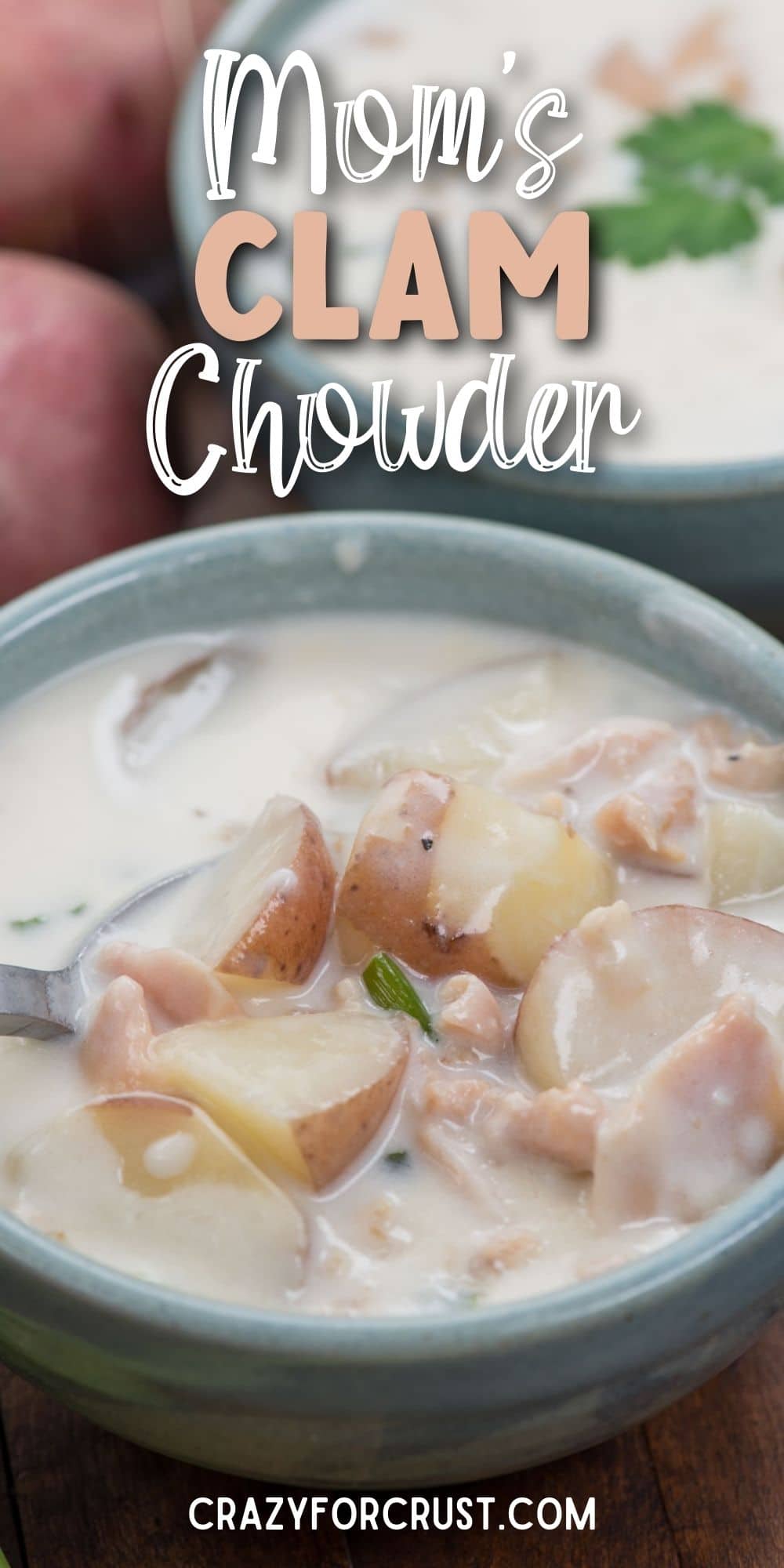 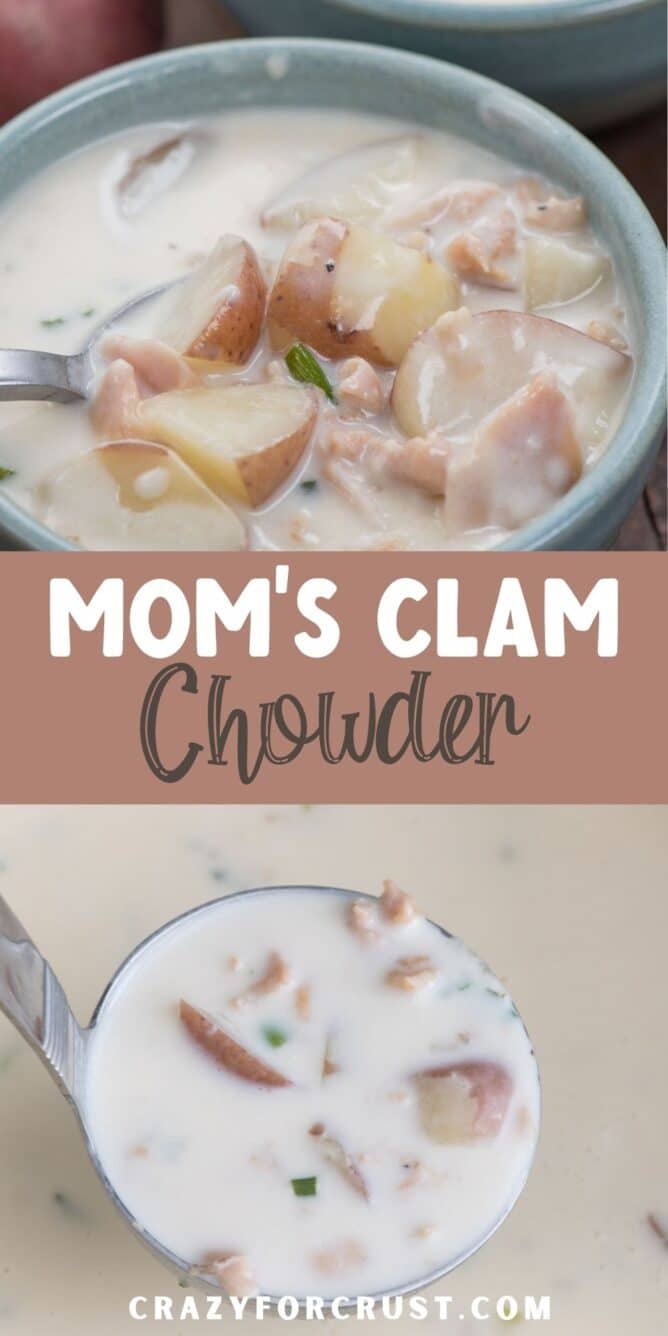 This Clam Chowder Soup Recipe is the BEST ONE you’ll ever eat. It’s a creamy New England Clam Chowder full of clams, potatoes, and delicious flavor. It’s an easy one-pot soup recipe that uses canned clams, clam juice, and roux to thicken the creamy base. It’s one of my all-time favorites and never disappoints!

BEST Clam Chowder in the WORLD!

This is the clam chowder I fell in love with as a kid! I know, clams, right? But, hear me out: if you’re craving a comforting bowl of deliciousness, this clam chowder soup recipe is the thing to make.

It’s hearty, creamy, and totally satisfying. It has the perfect balance of clams, potatoes, and aromatics combined with a thickened broth for the best bowl of soup.

The recipe is from my mom, who got it from my dance teacher during my long-ago tap-dancing days. Mom fell in love with it and made it at least a couple of times a year. I love it so much I still get big cravings for it, and my craving doesn’t go away until I make it.

I absolutely love clam chowder – it’s my favorite soup – but this one compares to no other clam chowder soup I’ve ever had. It’s seriously the best clam chowder recipe, and I’ve tried them all.

The flavor of this chowder is three-dimensional. It’s kind of an abstract concept, I know, but it’s true. Once you taste it and compare it to other recipes, you’ll realize this one is so much fuller and more well-rounded.

Why You’ll Love This Recipe

The trifecta that makes this clam chowder the best are these three things:

The other great part about this recipe is it’s a one-pot soup recipe. You can use the same pot to boil the potatoes, make the roux, and simmer the soup. Three cheers for easy clean-up!

Red potatoes – you can leave the skin on or peel them before you cut them into bite-sized pieces.

Chopped green onions: I love the flavor green onions bring to this, instead of using regular yellow ones.

Minced garlic: The flavor of the garlic adds SO much to the soup!

Unsalted butter: You can substitute salted if needed.

Half and half: Don’t have it? Use regular milk.

Clams: You’ll need two kinds of clam flavor, Canned chopped clams with the juice and a bottle of Clam juice.

How to Make Clam Chowder Soup

If you make this recipe in one pot, it does take some time. I’d rather spend more time cooking than cleaning up, so I prefer the one-pot method. If you want to speed up the process, you can boil the potatoes in one pot while you start assembling the soup in a second pot. It will save some time, but there will be more to clean up.

I like red potatoes for the color, but you can use other waxy potatoes like Yukon golds or new potatoes.

Don’t overcook the clams. Wait to add them until the end and cook them long enough to warm them up. This should only take about five minutes. If you overcook them, they will be tough.

We love this clam chowder with some crusty sourdough bread on the side to soak up every last drop. You can also serve it in a bread bowl or top it with oyster crackers or crushed saltines.

Is clam chowder a soup?

Chowder is a type of soup that is hearty and comforting. Different clam chowder recipes will be thicker like stew or thinner like soup. My recipe is in the middle – rich and creamy but not too thick.

What are the different types of clam chowder?

How to store leftover clam chowder?

Store leftovers in an airtight container in the refrigerator. If should keep well for up to four days. If it thickens after it’s chilled, add a splash of half and half or clam juice when you warm it up.

Can you freeze clam chowder?

Technically, you can freeze clam chowder, but the vegetables don’t always hold up great, and the half and half can separate. I prefer to enjoy it all and not freeze it. However, if you want to freeze it, allow the soup to fully cool and keep it in a freezer-safe container. It will keep for several months.

This is such a special New England clam chowder soup recipe and just writing about it makes me want to make another batch ASAP! It’s tried and true and delicious every time. I hope you love it just as much as I do!

More of My Favorite Soup Recipes 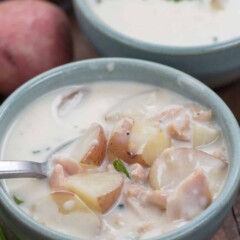 The Best Clam Chowder Soup Recipe is THIS one! It’s my mom’s recipe and it’s a creamy chunky New England Clam Chowder with potatoes and tons of flavor!