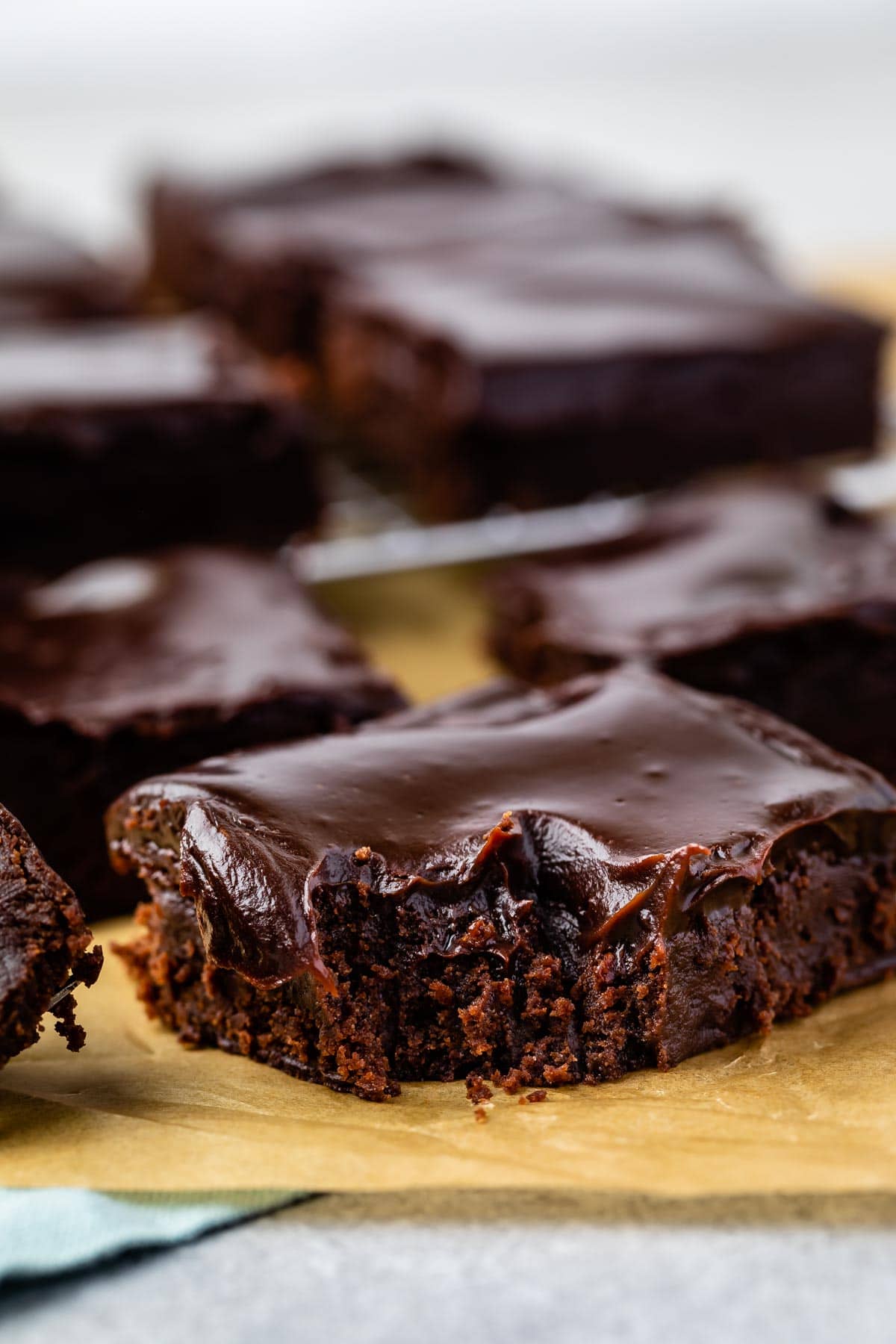 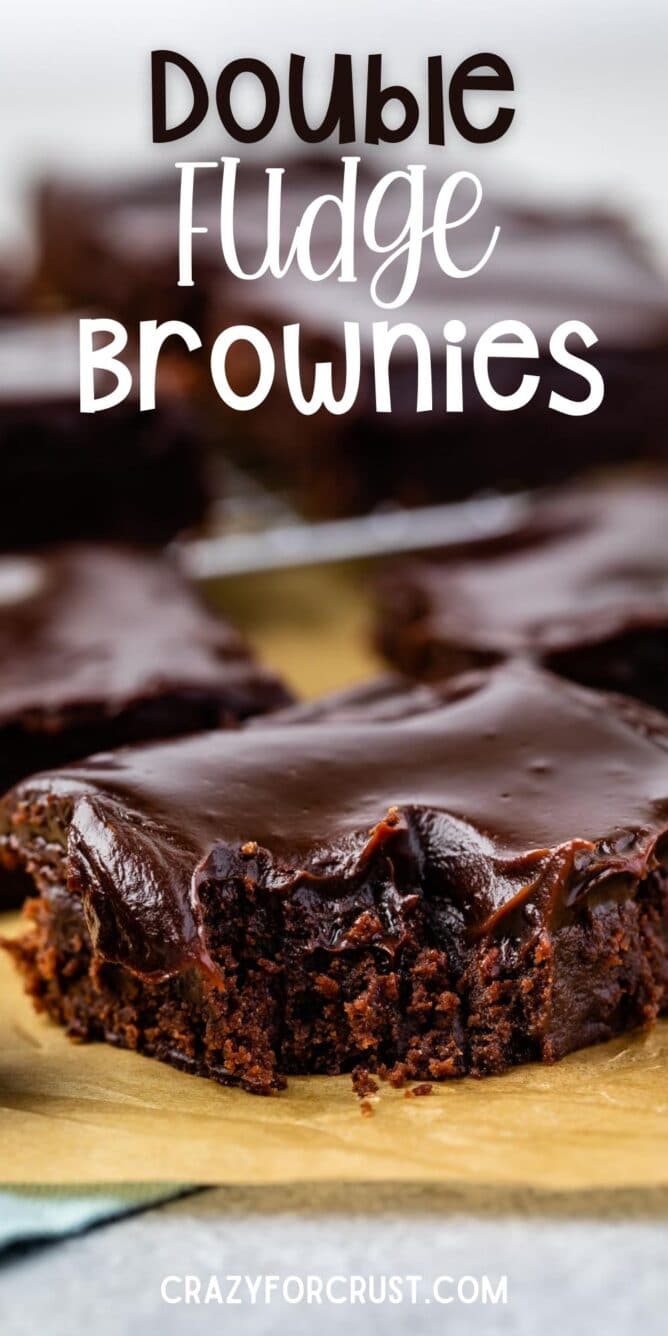 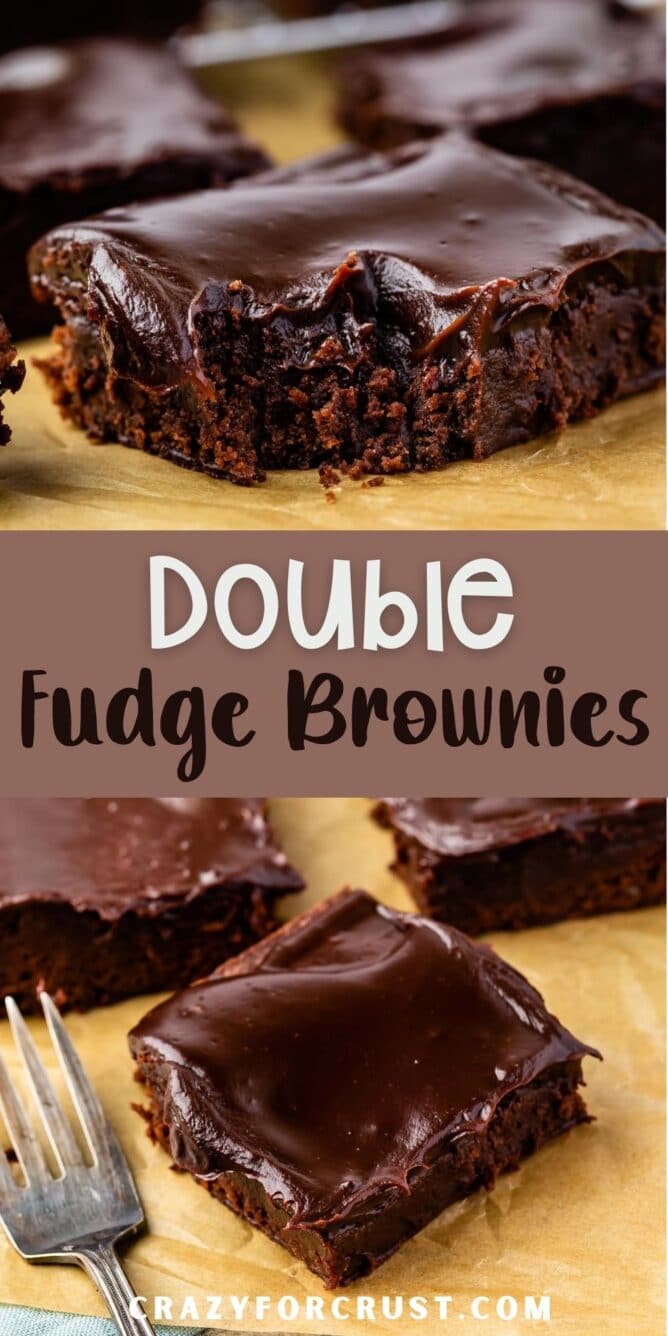 Learn how to make the BEST EVER Brownie Frosting! It’s a cooked chocolate fudge frosting that coats the brownies like a rich ganache. It’s irresistible and takes an ordinary brownie to a whole new fudgy chocolate level.

These easy double chocolate fudge brownies were my undoing the first time I made them. I could not resist them at all!

The actual brownie part is fantastic – rich and fudgy – but it’s the brownie icing that’s really the star. It’s has a texture like ganache and is super-rich like fudge. So, the best name for it is double fudge frosting. It. Is. To. Die. For. I mean…just look.

The BEST Brownie Frosting Ever!

You can use it to top any brownie recipe, but I love it with my brownies made with my homemade brownie mix. But you know what? It’s a great addition if you want to make a box mix. It will take them to a whole new level.

With this frosting, you will get the best double fudge brownies!

What makes a good frosting for brownies?

I think the best brownie frosting recipe for brownies is the kind that looks a little shiny and coats the top of the brownies like ganache. It’s not light and fluffy like chocolate buttercream. Instead, It’s similar to old-fashioned frosted brownies: rich and fudgy.

You need to use real butter and heavy cream to get that texture and richness. Plus, the frosting is cooked, which thickens it and gives it the best texture.

So, instead of beating the frosting ingredients with a mixer, you combine them in a pan and heat them on the stove. Then you just pour the icing over the brownies.

What you get are the best fudgy frosted brownies. I mean, do you need any more convincing? You have to try this chocolate icing for brownies!

Ingredients in the BEST Brownie Frosting

Brownies: For this recipe, you can use a store-bought brownie mix. Just follow the instructions on the box! Or, make homemade double chocolate brownies with my from-scratch brownie mix instead. Make and bake the brownies first and then let them completely cool before icing them.

Heavy whipping cream: There is no substitute for this!!!

Sour cream: Also, no substitute for this – it makes a nice creamy frosting.

Instant coffee granules: This is optional! Your frosting won’t taste like mocha or coffee, but the bit of coffee accentuates the chocolate flavor, making it much deeper and more intense.

Granulated Sugar: Weird, I know! But it’s a cooked frosting!

Cocoa: Use any unsweetened cocoa powder – you can use regular, dark or dutch process. Learn all about cocoa!

Pinch salt: To accentuate the flavor

How to Make Brownie Frosting

Can I put frosting on brownies?

Yes! Frosted brownies are so good.

What can I substitute for heavy whipping cream?

There is no substitute. For the best frosting, top your brownies with heavy whipping cream frosting.

Can I use any brownie recipe?

Yep! Any homemade brownie recipe or brownies from a mix will work.

Does the frosting harden?

No, it won’t harden on its own at room temperature. You can refrigerate the frosted brownies if the frosting is set up more.

When should I add the icing to the brownies?

Wait until the brownies are cooled to frost them.

Can I decorate the brownies?

I think sprinkles would be fun!

What other frosting recipes could I use?

The next time you make brownies, turn them into double fudge chocolate brownies with this fantastic brownie frosting recipe! It is the best way to add a chocolatey finishing touch. Enjoy! 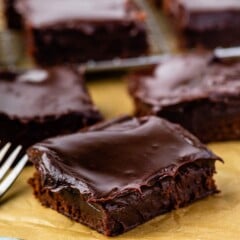 3.33 from 37 votes
These Easy Double Fudge Brownies are as easy as a box, but SO MUCH BETTER! Super rich and fudgy, they’re topped with a cooked chocolate frosting that satisfies any chocolate craving. Cut the brownies into shapes for any holiday!
Prep Time 15 minutes
Cook Time 35 minutes
Total Time 50 minutes
Yield 24 brownies
Serving Size 1 brownie
Save RecipeSaved!Rate RecipePrint Recipe

If you’re using a box brownie mix, make the brownies according to the recipe on the box, not my recipe.

When I used to tell stories:

Want to know what else undid me last week? Having to spend $200 on new curtains for my living room.

We got new neighbors in November. I don’t know where they moved from, but I’m betting it was somewhere where you need to leave floodlights on 24 hours a day. You see, instead of having normal backyard lights, the house next door has actual park lamp lights. There are two 14 foot tall poles with three bulbs each. They glow all night long, and it looks like National Lampoon’s Christmas Vacation in my bedroom.

Since I’ve already had to ask them to turn down the music in their garage (it was shaking my office, literally), I’m not betting too much on the lights going out any time soon.

All because my new neighbors think we live in a jail yard…or something. Neighbors make me want to move to the country.

The caveat? The new curtains are teal. #tealallthethings

These Double Fudge Brownies are irresistible and taken to a whole new fudgy chocolate level with my chocolate fudge frosting on top!