Make Disneyland Churro Toffee at HOME! This is an easy copycat recipe but it’s good even if you’ve never had it at Disneyland. Rich, buttery toffee topped with white chocolate and cinnamon sugar – this is easily our FAVORITE toffee recipe ever!

If I could only have one Disney treat for the rest of my life, it would be their Churro Toffee. It’s crunchy and sweet and has that hint of warm cinnamon and I can never get enough of it!

Whenever I visit Disneyland I buy way too much of this stuff because I know I can’t get it anywhere else – until NOW! Now I can make churro toffee at HOME and that’s so dangerous…watch out waistline.

What is Churro Toffee?

Churro Toffee is a buttery toffee that’s topped with white chocolate and cinnamon sugar (like a churro, hence the name).

At Disneyland, they use their signature toffee you can buy at the candy store (the one that’s usually coated in chocolate and toffee bits), but they coat it with white chocolate. The cinnamon sugar is sprinkled on top while the white chocolate is still wet, causing it to stick, and adding a nice warm flavor to the bite.

The first time I saw this toffee version on instagram I immediately thought too sweet. White chocolate, for me, is cloyingly sweet and I don’t normally enjoy it. But, of course, Disney treats freak that I am, I had to try it anyway and I was so surprised:

It’s not too sweet. It’s actually less sweet than the regular toffee – and it tastes BETTER!

I immediately knew I was going to make churro toffee at home because I can’t go that long without it. PLUS, homemade toffee makes a great holiday gift, so it’s perfect to learn how to make toffee this time of year.

I know that making toffee at home can seem difficult because it involves a cooking sugar and using a candy thermometer, but it’s really easy to make homemade toffee.

Once you have your toffee recipe down you can make it so many different ways with so many toppings!

How do you make homemade toffee?

It’s easier than you think. You just need a few ingredients, which you should gather before you start:

To make the base of the toffee, you’re going to cooke your butter, sugar, water and corn syrup in a saucepan over medium heat. You bring it to a boil and then let it cook until it’s 290°F.

Do you need a candy thermometer to make toffee?

YES. I mean, I guess there are some recipes out there that say “boil for 3 minutes” but really, you have no idea when you’re guessing. Toffee is one of those things that needs to be done just perfect or it’s too hard or too soft.

I used to use the old-school analog candy thermometers but I’ve found over time that they’re not as good. You can use them for sure, but know they won’t last as long as digital; digital thermometers are the way to go.

You can find many digital thermometers on Amazon, but I recommend the Thermapen. They’re more expensive but so much more reliable (and no battery) but it’s accurate. It might not clip on your pot, but it’s going to be more reliable than an analog clip-on one.

Once you have your toffee in the pan, it’s time to top it with the white chocolate.

Let the toffee set a few minutes so you can spread the chocolate, but not so long the chocolate won’t stick. 4-5 minutes is just perfect.

Spread the chocolate over the top and sprinkle with cinnamon sugar. Once it hardens, you crack it apart and then eat!

Skip the dipping and just spread chocolate on top; less steps and it tastes just as good!

I know that at Disneyland, the toffee is completely coated in white chocolate, but I like to just spread it on the top. It’s so much easier than dipping it!

If you love Disney treats, you’ll love this toffee and some of the other copycats I’ve made:

Other toffee recipes to try: 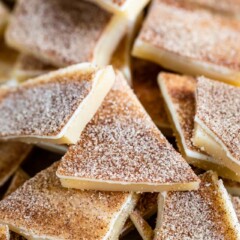 5 from 2 votes
Make Disneyland Churro Toffee at HOME! This is an easy copycat recipe but it's good even if you've never had it at Disneyland. Rich, buttery toffee topped with white chocolate and cinnamon sugar – this is easily our FAVORITE toffee recipe ever!
Prep Time 10 minutes
Cook Time 30 minutes
Total Time 40 minutes
Yield 12 servings
Serving Size 1 serving
Save RecipeSaved!Rate RecipePrint Recipe

Copycat Disney Churro Toffee is the best homemade toffee ever! You can make this treat at home and have it all the time.