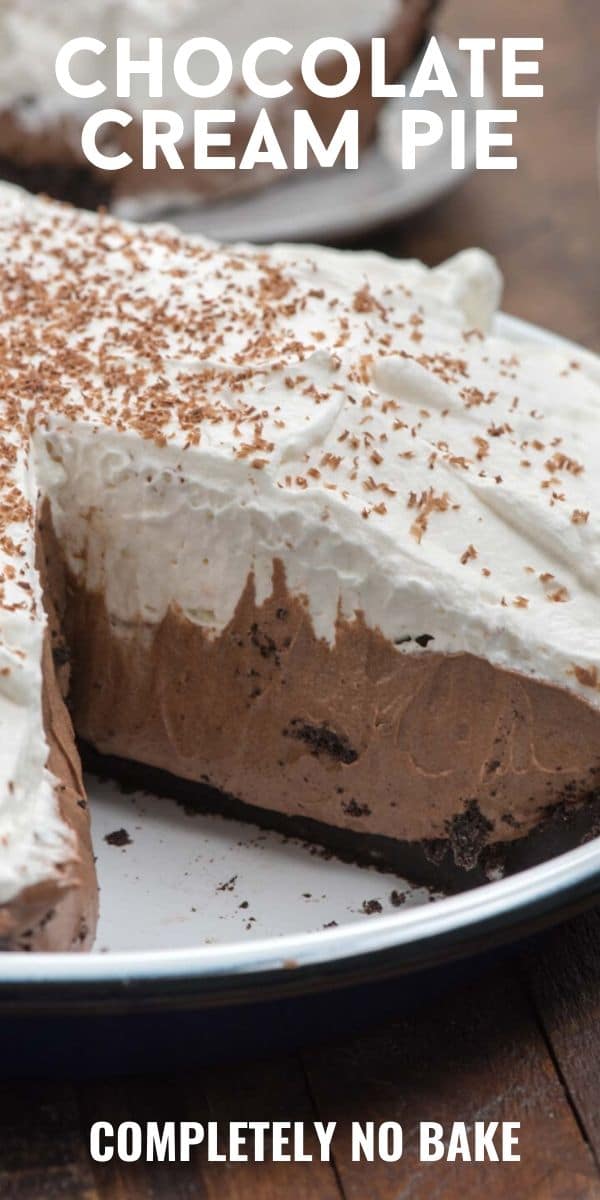 This is the BEST No Bake Chocolate Cream Pie recipe! An Oreo crust is filled with a thick eggless chocolate filling and topped with whipped cream. This pie is a hit every time I make it – and it’s really the perfect chocolate pie.

I’ve gotta say, Chocolate Cream Pie is one of my weaknesses. It’s rich and silky and creamy and bite after bite goes down SO easily. Good luck just having one slice!

Ever since my first blogging pi day, I’ve looked forward to March 14 every year so I can post a new pie in tribute. I think and think and plan and wonder: what should I make for pi day this year? WWAD: what would Albert (Einstein) do?

I gotta say, I think no-bake pies are my favorite and this chocolate cream version is in my Top 5 pies of all time.

With the rich chocolate filling and Oreo cookie crust, this pie is like a cream pie married a French Silk Pie, but it’s eggless, easy, and takes about 10 minutes to make.

Just look at that filling…it’s dreamy isn’t it? I literally could have shoved my face in it but I was way more civilized: I ate it with a fork straight from the pan. Who needs to dirty a plate?

When I decided on making this chocolate cream pie for pi day, I wanted to improve upon a traditional French Silk in two ways:

If you look at traditional silk recipes, you cook the eggs and sugar until it coats the back of a spoon, but that just really scares me. Growing up, I had the threat of salmonella drummed into my head repeatedly so just cooking eggs in that way isn’t something I’m in love with doing. Also: I tend to over cook them and they scramble. #EW

THIS Chocolate Cream Pie Recipe is the best of both worlds: it tastes akin to French Silk but is easy to make with no strange ingredients. It comes together in minutes – without pudding mix!

Ingredients for this easy pie

Did I mention it only has 6 ingredients (7, if you’re making your crust from scratch). And it only takes about 10 minutes to put together?

Crust: This recipe starts with my Oreo Crust. Feel free to use one you buy at the store, or make mine. Or, if you want a pastry crust, pre-bake my all butter crust recipe and use it instead.

Baking Chocolate: I use unsweetened in this pie but in a pinch you can use semi-sweet. Baking chocolate is sold in the baking aisle, usually near the top shelf, and comes in bars.

Heavy Whipping Cream: We use that, along with the powdered sugar and vanilla, to make whipped cream. Make sure to whip it to stiff peaks.

Tips for Assembling the pie

This No Bake Chocolate Cream Pie with Oreo crust was too hard to resist! The thick chocolate layer and fresh whipped cream makes this the perfect pie to serve when you’re craving chocolate!

FAQ about this pie

My pie didn’t set but I followed the directions, what happened?

I did all of those things right and it still didn’t set.

Chances are the chocolate was too hot or you didn’t fold properly. Watch the video for tips on folding the mixture.

How do you store the pie?

Store it loosely covered in the refrigerator.

Can I use cool whip instead of whipped cream?

Yes. Use one 8-ounce container in the filling and a second container for topping (probably won’t need the entire container for the topping). Again: be sure to FOLD it into the chocolate mixture. 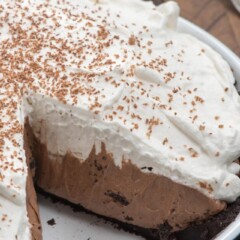 The pie SHOULD set just fine. If it doesn’t, here are some possible reasons why:   To substitute cool whip: use one (8-ounce) container for the filling. Use about half a second container for the topping (or more if you want lots).

Do you like the pie plate I used? I have to share: it’s such a pretty and versatile one. It came from Barn Light Electric and is the enamelware pie plate. The pie sliced easy and popped right out, plus they come in pretty colors. Full disclosure: they sent me a pie plate so I could send them some photos of my pie for their site, but didn’t pay me or even ask for a link to them. I just really love the plates and plan to buy several more!

Other Pies I love:

Celebrating Pi Day? How about these pies: a No Bake Nutella Pie that looks like heaven, a No Bake Chocolate Cheesecake Pie for you cheesecake lovers, or my favorite, Julianne’s No Bake Key Lime Mousse Pie!

This Chocolate Cream Pie is completely no bake and egg free! The thick rich chocolate filling has an Oreo crust and a homemade whipped cream topping. It’s the BEST chocolate pie recipe!