Slow Cooker Peanut Butter Brownie Pudding – chocolate brownie mix and pudding mix cooked in the crockpot with peanut butter and peanut butter cups! This easy indulgent dessert recipe is one everyone loves, including me.

Right? And I’m trying to lose weight. Eating right is so hard when you have my job. SO SO FREAKING HARD.

Monday: Okay. That’s it. Salad for lunch! Low-carb! Track calories! No wine! No dessert! Okay, maybe one cookie. I didn’t have wine, after all.

Wednesday: Okay. THIS IS IT. REALLY. Eggs for breakfast, no wine. Salad for lunch. Healthy dinner…Reese’s Peanut Butter Cups leftover from pudding recipe.

Thursday: Okay. Really. No wine all week = #winning. Dramatic work and emotionally stressful morning ensues. Gryo for lunch. ALL THE WINE FOR DINNER.

Although, to be fair to myself, I worked out all but one day last week and, did you see no wine for three days while I salivated while my husband drank a glass after dinner? Baby steps, my friends.

Then I see photos of myself and I have to add money to the fat jar because even if I think it, not saying it doesn’t count.

Maybe this week will be better. I guess that’s all I can hope for?

Also, the moral of the story is don’t make Slow Cooker Peanut Butter Brownie Pudding when you’re trying to diet. Just don’t. Unless you like to torture yourself, or unless you’re going to a party and want to torture everyone else.

This easy brownie pudding recipe is a riff on my original slow cooker brownie pudding. I love making desserts in the slow cooker, like caramel cake or apple crisp, or even pumpkin lava cake. They’re easy, fast, and feed a crowd. Plus, I think making them in the crock pot makes them even more ooey gooey than a normal cake or pudding cake recipe.

If you haven’t tried crockpot pudding cake (or brownies) yet, you need to try. It’s such a versatile recipe because it starts with a mix. On this recipe you can start with a chocolate cake mix or a brownie mix. Both work and taste equally as good, and both really do taste like brownies.

If you don’t like that combination I don’t think we can be friends. #kidding #sortof

Slow Cooker Peanut Butter Brownie Pudding is a hot and gooey chocolate brownie recipe cooked in the crockpot. It makes it’s own hot fudge sauce and it full of triple the peanut butter flavor.

If only I didn’t have to bake for my job, I’d be a lot thinner. So there, it’s all your fault. LOL, kidding. #sorta 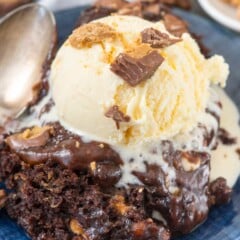 So many of my fellow bloggers love brownie pudding recipes too! Check out a from-scratch brownie pudding by Brown Eyed Baker, Brownie Pudding Toffee Trifle by My Gluten-Free Kitchen, and Hot Fudge Pudding Cake by A Family Feast.