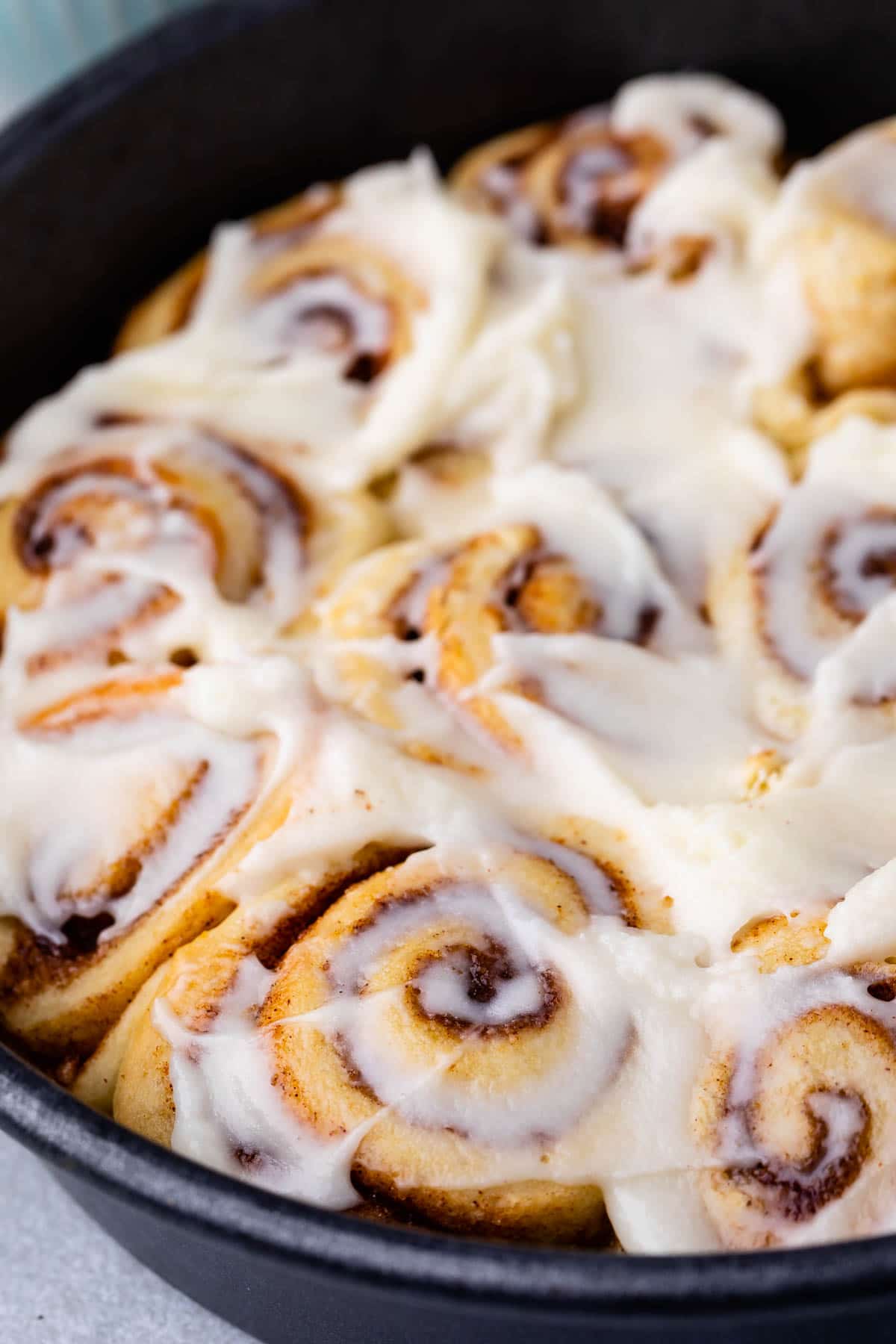 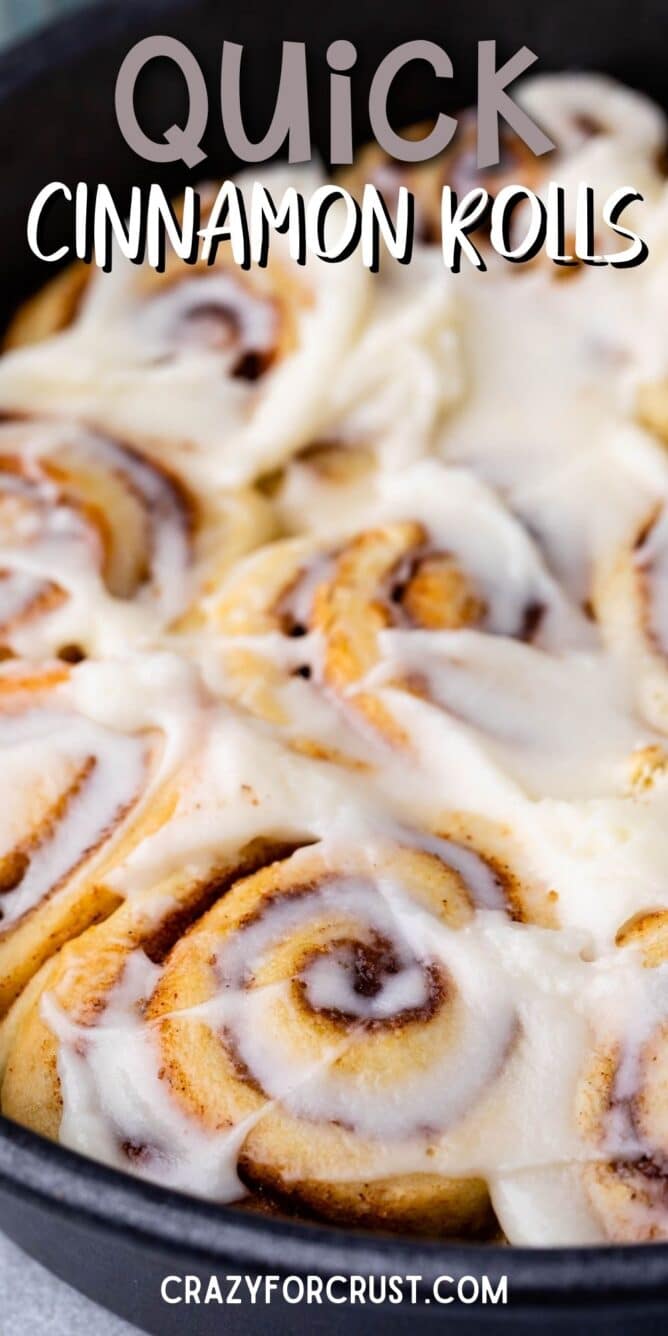 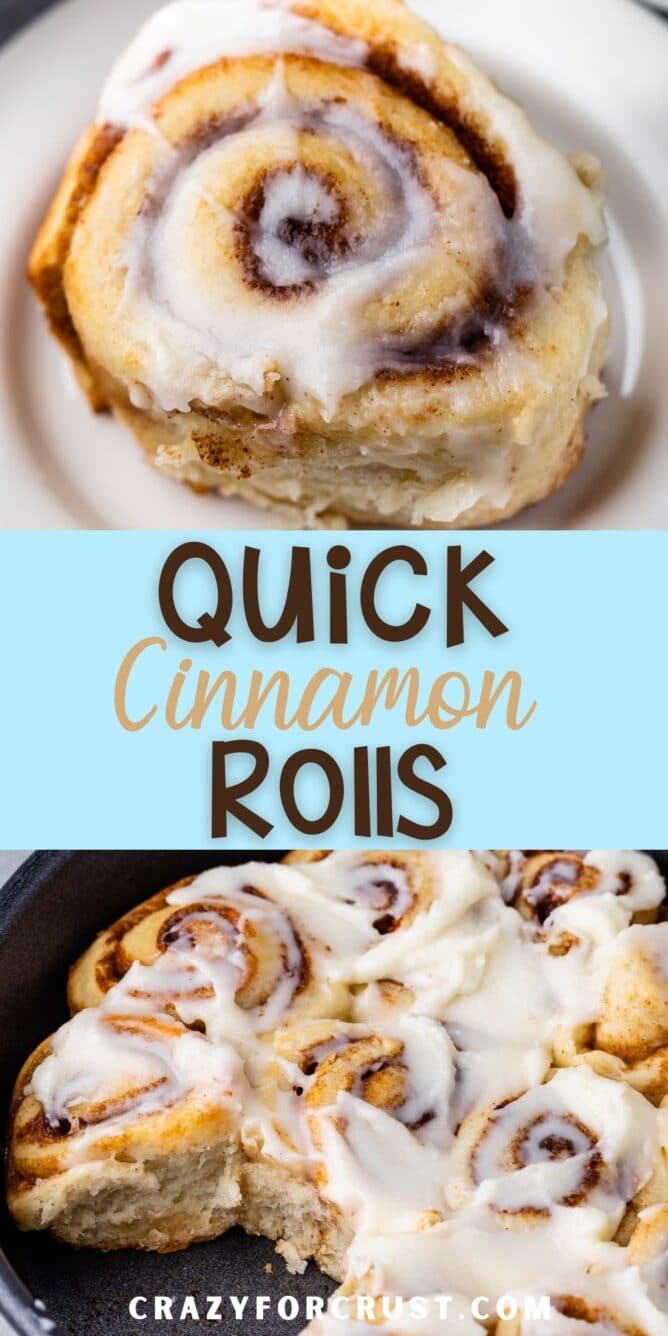 I love making my easy cinnamon roll recipe because I’m impatient and hate waiting. That’s why this recipe is perfect! These quick cinnamon rolls are made in less than one hour. They have cream cheese icing and are the perfect breakfast any day!

Best Quick Cinnamon Rolls in under ONE Hour

If you know me, you probably know I’m suuuuuuuuper impatient. My mom tried to teach me to crochet about 1.2 million times before she gave up. Same with sewing. I want what I want and I want it NOW.

That’s why this cinnamon rolls recipe is perfect for me. And if you’re like me and totally hate waiting alllllllll day for yeast to rise, this quick cinnamon roll recipe is for you.

From start to finish these rolls are made in under one hour. Yup – one hour. Have you ever gotten up super early to make cinnamon rolls? No more – these are done fast.

What is the secret to easy Cinnamon Rolls?

What yeast is Best for Cinnamon Rolls?

Like in the 45 minute dinner roll recipes, this yeasted dough has lots of yeast to make it rise fast. You add a full tablespoon of ACTIVE DRY yeast, sugar, and warm water (think bathwater) to the bowl of your stand mixer and let it sit for 15 minutes. It’ll get all frothy and awesome. Using the extra yeast makes it rise quicker.

I will list both options in the recipe – because they require different methods – but the rest of this post details how to use instant yeast, because you only need one packet and it cuts out a bunch of rise time. Instant Yeast requires only a 10 minute rest and then a rise time, cutting the time to make cinnamon rolls down a ton. Each brand of yeast has different names for their instant yeast but I always use Rapid Rise Yeast from Fleischmann’s Yeast.

Learn all about using yeast and the different kinds of yeast!

What do you need to make Quick Cinnamon Rolls?

Yeast: Instant or Active Dry (be sure to know which one you have, because it matters)

All-Purpose Flour: Be sure to measure it correctly

Butter: For the dough and the filling

Water: Instead of using warm milk, this recipe uses water. But you could use milk if you want.

Cinnamon: For the filling

We’ll talk about the frosting later!

How to make Cinnamon Rolls in under 1 Hour

These directions use INSTANT YEAST. Be sure to read the recipe fully and know which you’re using.

Let’s talk about the frosting for a second? Anyone else agree it’s the best part of the roll besides the gooey center? You have some options for making frosting:

These rolls are so good. And they’re fast!! Perfect for you impatient people like me.

Turn these into overnight cinnamon rolls by covering tightly with plastic wrap after you’ve placed in the pan. Store in refrigerator overnight. Allow to come to room temperature before baking.

How to Store Cinnamon Rolls

Store these lightly covered. I like to store them on the counter because they never last longer than a day. Storing them in the refrigerator will make them last longer.

Can you freeze cinnamon rolls baked or unbaked?

You can freeze the unbaked rolls or the baked and frosted ones, for up to a month.

What type of yeast is best for making fast cinnamon rolls?

I prefer using instant yeast because you just need one packet – but you can use active dry yeast (you’ll need to use more of it).

What flour is best for making yeasted dough?

All-Purpose flour is the easiest one to use, although you can substitute bread flour in this recipe.

Why didn’t my active dry yeast get bubbly?

Chances are the water was too hot (or too cold) or the yeast might be old.

Why didn’t my cinnamon rolls rise?

This happens when the yeast doesn’t activate. Chances are the water was too hot (killed the yeast) or too cold (didn’t wake it up) or your yeast could be old, or expired.

Why do cinnamon rolls fall after baking?

How do you know when cinnamon rolls are done baking?

They’ll be golden brown and not doughy in the center.

How big should I make quick cinnamon rolls?

I recommend making these smaller, because they’ll rise faster.

Should I store leftover cinnamon rolls in the refrigerator?

You don’t’ have to but you can if you want them to last longer than a day or two.

How to thaw cinnamon rolls and how to reheat them:

Thaw them in the refrigerator if they’ve been frozen. Reheat them in the microwave on 50% power so the icing doesn’t melt. 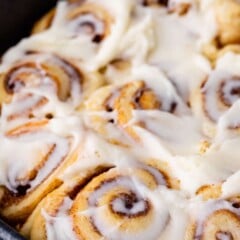 4.45 from 27 votes
Cinnamon rolls in one hour, yes it can be done! And this recipe makes a perfect 6 rolls – great for when you need a small batch.
Prep Time 20 minutes
Cook Time 15 minutes
Total Time 35 minutes
Yield 12 small rolls or 6 larger
Serving Size 1 roll
Save RecipeSaved!Rate RecipePrint Recipe

Check out my round up of Over 70 Cinnamon Roll Recipes!

Quick Cinnamon Rolls in one hour! This easy cinnamon roll recipe is done quick and makes the perfect sized small cinnamon rolls – these are done in under an hour. Whenever you want cinnamon rolls fast THIS is the recipe to use!