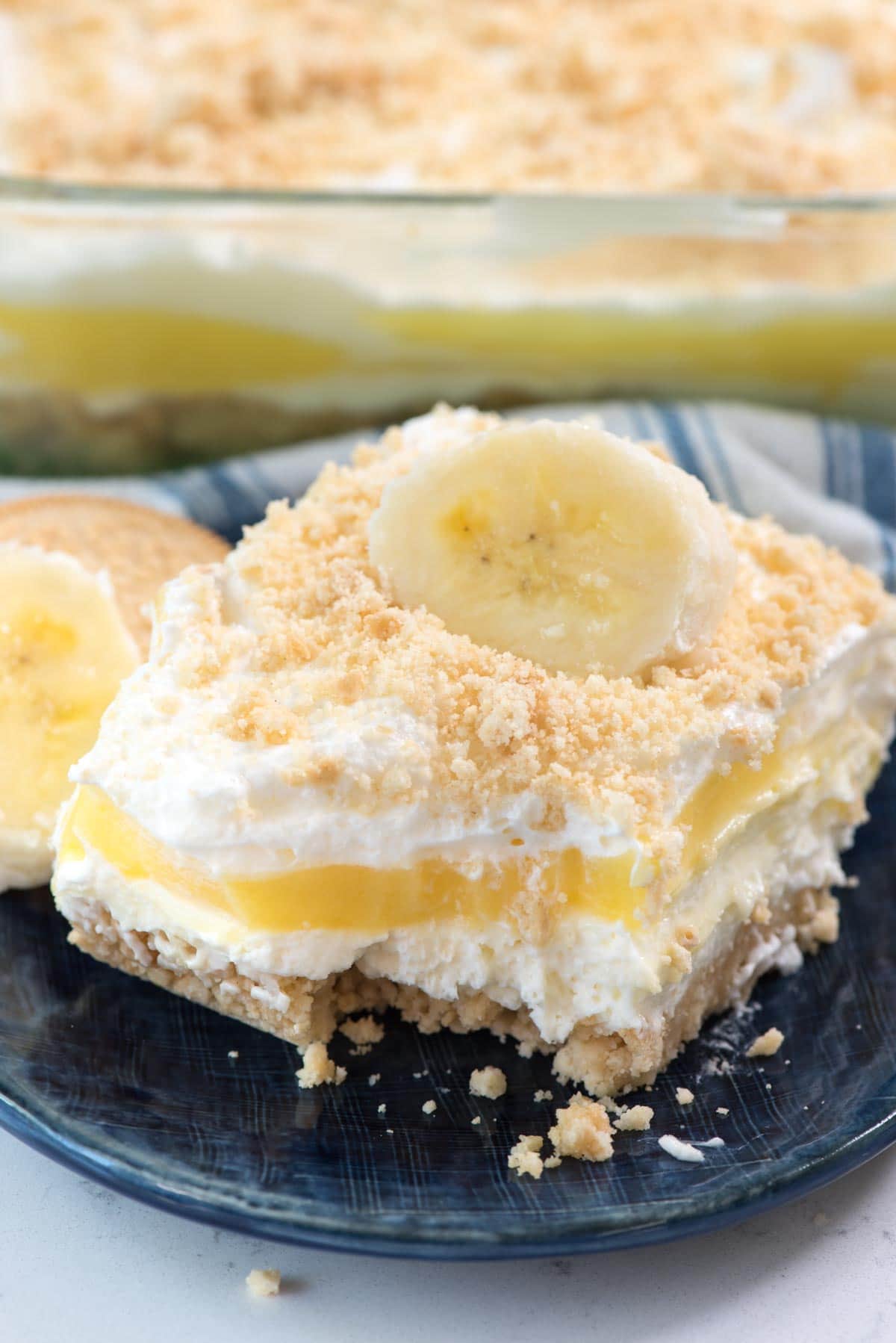 No Bake Banana Pudding Dream Dessert – this easy dessert lasagna recipe is made with BANANA pudding! It’s layered with no bake cheesecake and a Golden Oreo Crust! 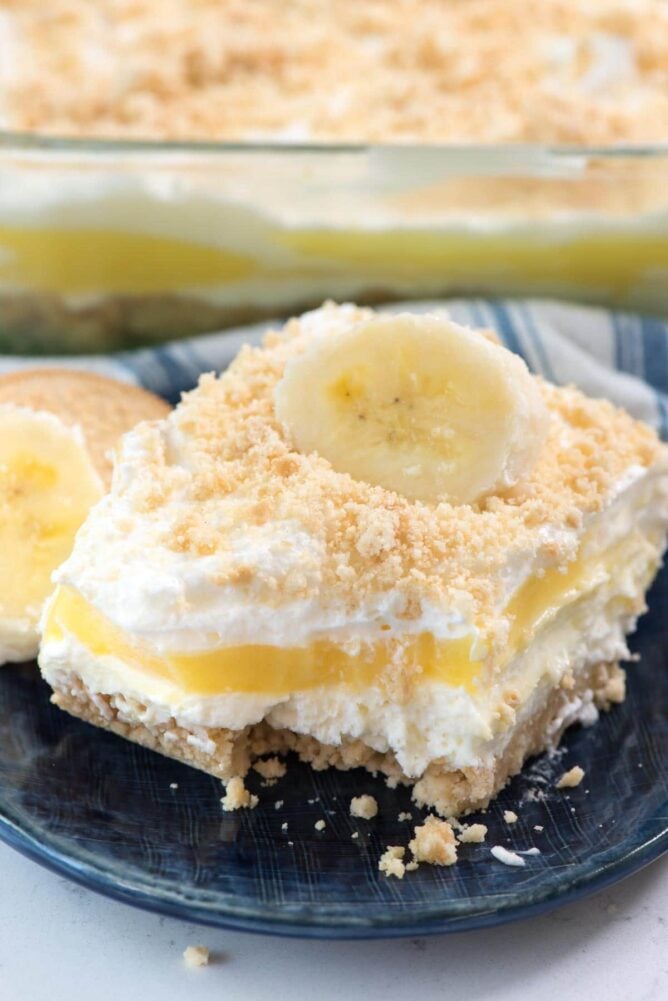 Last week I got to have a super fun “is this my life” experience: I got invited to a premiere of the new movie Rough Night. The PR agency was hosting a dinner and movie showing close by and somehow I got on the list. I get tons of press email every day and most of it goes in the delete bin, but this one I responded to promptly with a YES!

If you haven’t heard about the movie, it’s a cross between The Hangover, Bridesmaids, and Very Bad Things. Basically it’s a dark comedy about a bachelorette party; it’s very raunchy with lots of bad words and references. In other words, it was hilarious. Before the movie we had drinks and appetizers at a local restaurant (can I tell you that fried ravioli is the best thing ever?) and I got to meet one of my favorite radio personalities from a local morning radio show (for you Nor Cal people: Katie from the Wake-Up Call is just as hilarious in person as she is on the radio!)

Dinner was great, the movie was funny, but the best part about the evening? I was allowed to bring a couple of guests. Since it was definitely a “Girls Only” party (evidenced by the specially adorned headbands and straws…think bachelorette party…) I invited two of my close non-blogger friends. As a blogger, I often get to do cool things, like go on press trips or to new restaurants. So while the specialness of the evening wasn’t lost on me, it wasn’t something new. Being able to bring a friend that isn’t used to free stuff and being treated like a VIP was super cool.

It’s kind of how I imagine celebrities feel when they bring their mom to the Emmy’s…divided by a trillion because nothing I do is anywhere near celebrity status, ha!

The day that I went to the premiere, I’d spent the day in the kitchen baking and cooking up a storm. I hired an assistant to help me crank out recipes and videos once a week (our record is 7 new recipes + photos + videos…in one day). Needless to say, I was exhausted when I left the house, and after two wines and a tequila shot that Katie bought for the table, I was even more tired when I got home.

Instead of going to bed like I should have, I did what Dorothy normally does: drank more wine, watched RHOA, and ate way too much Banana Pudding Dream Dessert.

It was the perfect night, don’t you think? 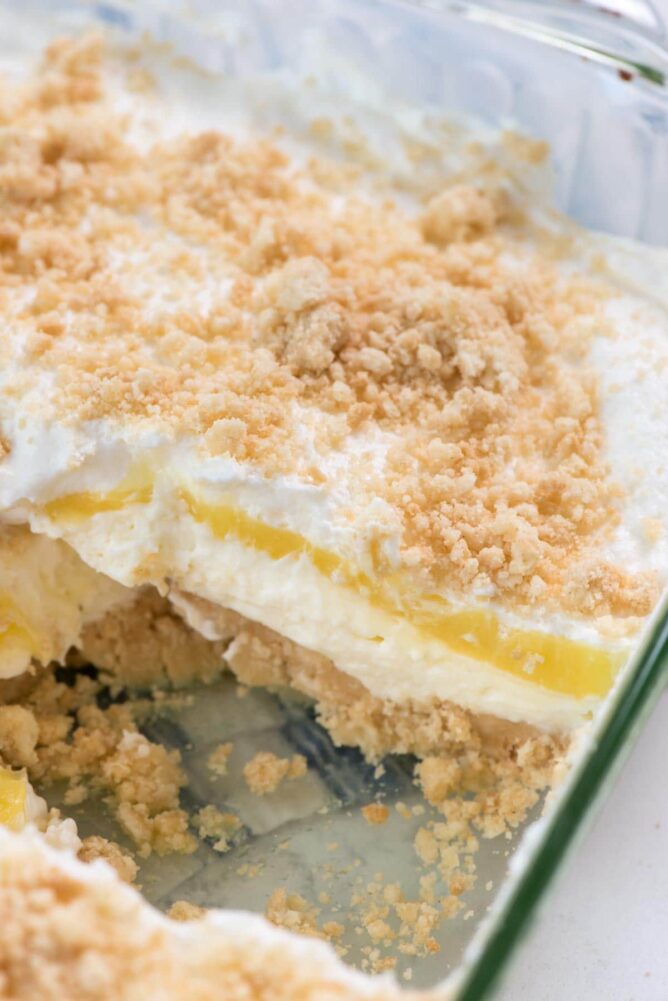 No Bake Banana Pudding Dream Dessert is the dessert known by many names: No Bake Dessert, Lush Dessert, Dessert Lasagna, Dream Dessert. Really, I never know what to call it. Basically, it’s layers of fabulousness on top of a crust. And it’s no-bake, which means it’s the best dessert in the entire world. I’ve made pumpkin and mocha, mint and coconut, strawberry and lemon before, and now I can add BANANA to that list.

(Bananas and Golden Oreos should be married. In fact, why is there not a banana pudding Oreo yet???)

Let’s break down this dessert:

Layer 2: No Bake Cheesecake with cream cheese, sugar, and some whipped topping (Yes, you can use whipped cream).

Good luck only eating a few bites of this No Bake Banana Pudding Dream Dessert. It goes down SO EASY. Make it for a potluck and watch it disappear! 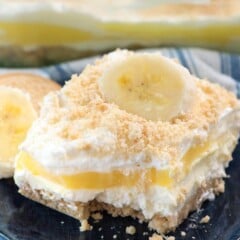 3.97 from 102 votes
No Bake Banana Pudding Dream Dessert - this easy dessert lasagna recipe is made with BANANA pudding! It's layered with no bake cheesecake and a Golden Oreo Crust!
Yield 9 -12 servings
Save RecipeSaved!Rate RecipePrint Recipe

And be sure to check out my friend’s takes on banana pudding: Banana Pudding Dip by Melissa’s Southern Style Kitchen, Banana White Chocolate Cheesecake Bars, by It’s Yummi, Banana Pudding Cake by Spend with Pennies, or Banana Cheesecake Blondies by Grandbaby Cakes.