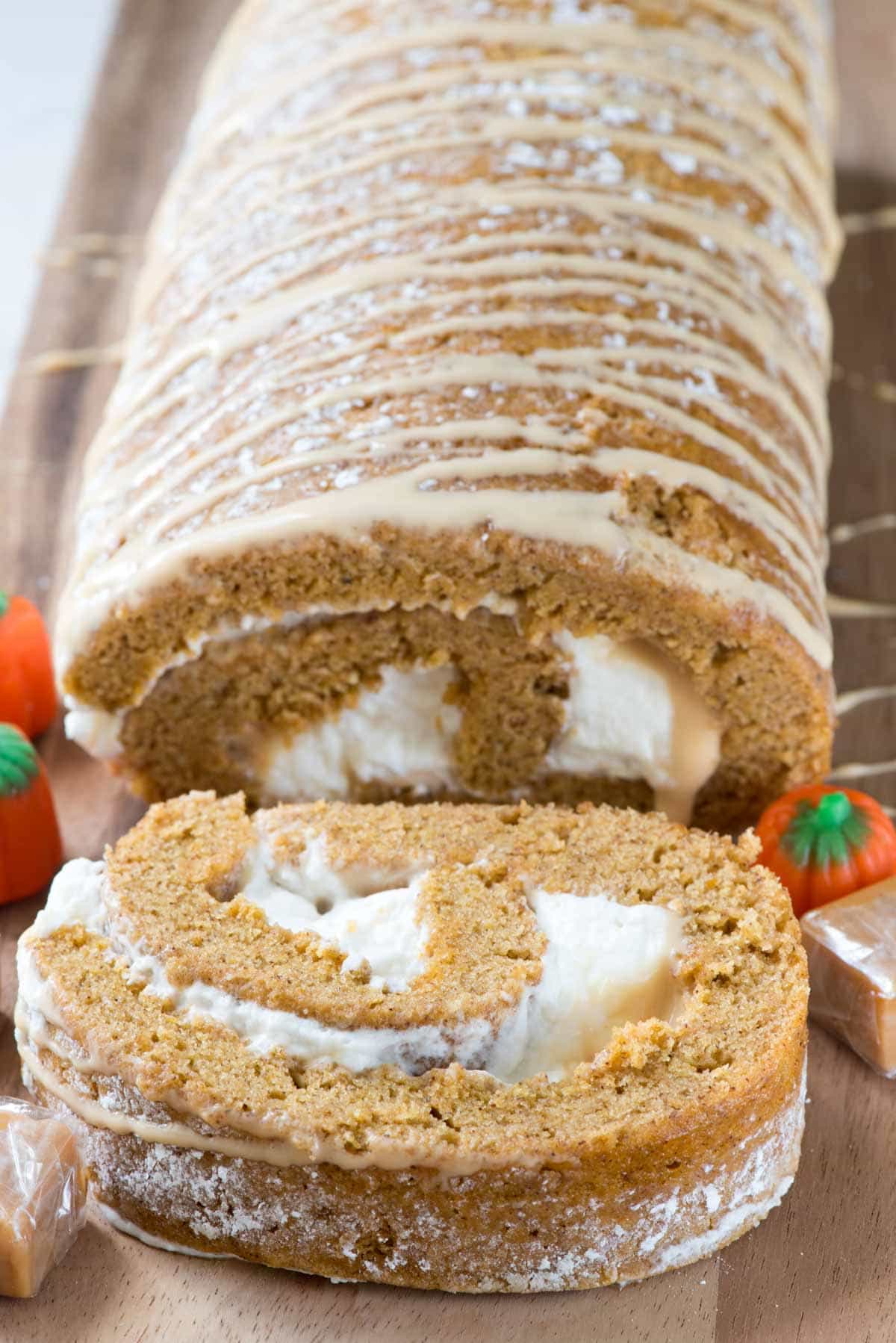 This pumpkin cake roll recipe is famous in our family. Well, sort of. You see, my mother-in-law has been making pumpkin rolls at the holidays for longer than I’ve known her. The cake part of this recipe is hers; the rest of it is my way of taking something everyone loves and messing with it to make it better (or, to some purists, ruin it).

The first time I ever tasted a pumpkin roll was the first time I spent a holiday with Lorna, my mother-in-law. She used to make them every season and give them as gifts, but she was kind of a genius about it: she made mini pumpkin rolls. Instead of rolling it as one big one, she’d cut the hot cake into thirds and roll up three of them which, it turns out, is the perfect size for giving.

(I was going to make this as a mini cake roll but, then, I’m me and I like my desserts BIG. (Kind of like I like my yoga pants.))

Not only had I never had a pumpkin roll before I tasted hers, but I’d never had a cake roll in general. I ate that first cake roll in awe. Mel doesn’t like pumpkin (I know, right?) so I ate the whole thing myself, wondering about the magic of how you make them. Lorna explained it all to me, about the rolling in the kitchen towel, the powdered sugar, how cracks can be fixed with more frosting.

It was years before I tried making my own cake roll; I was always so scared to try. And then I went for it and made one for my mom’s birthday one year. Then I made a carrot cake version…and after that I couldn’t stop myself. Cake Roll recipes became my obsession, with me making a new version every few months.  I even have a draft of a cookbook proposal for a cake roll book (that I’ve never done anything with).

All of it started with THIS caramel pumpkin cake roll recipe and my sweet mother-in-law. I owe her a lot! 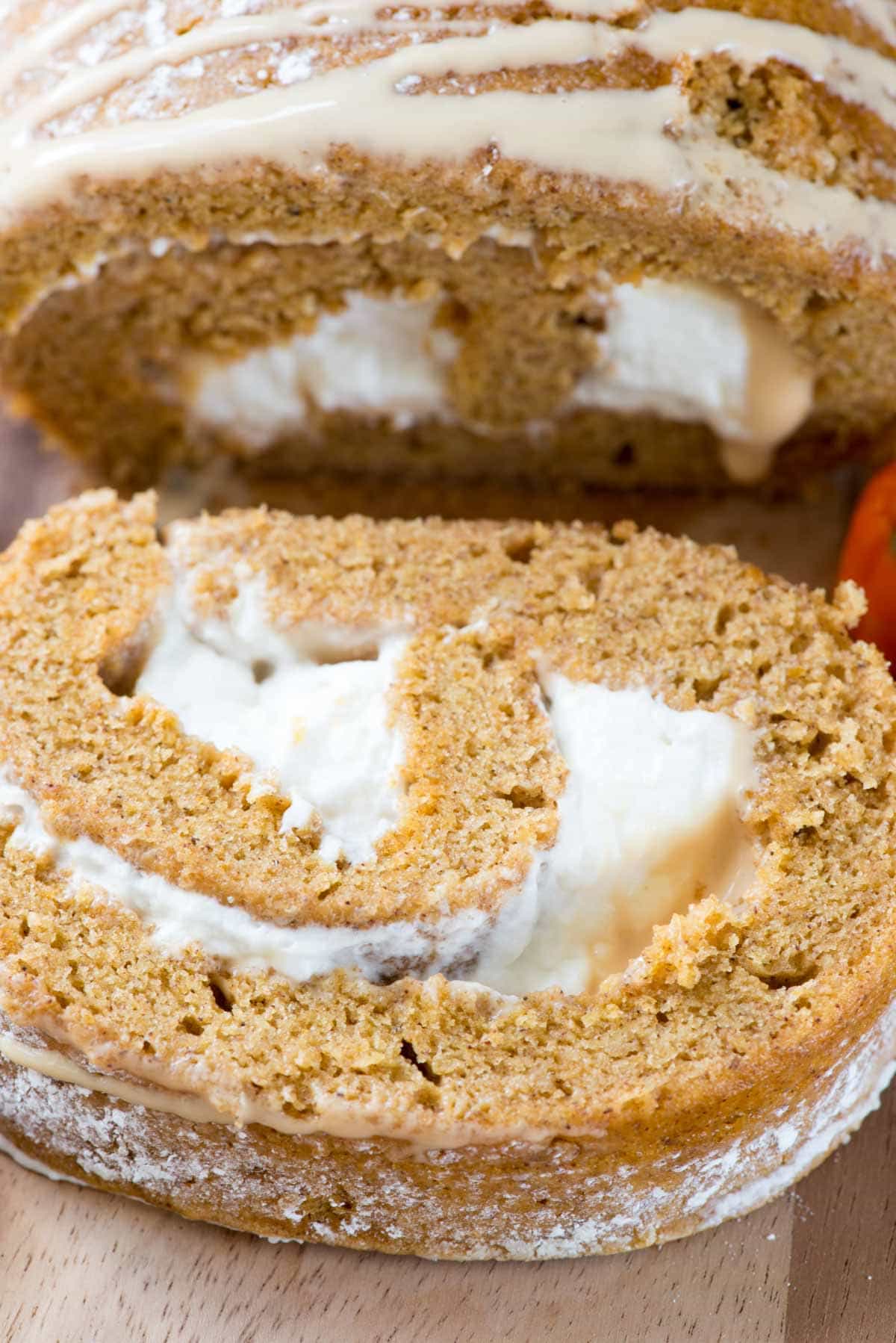 The recipe is a basic pumpkin roll cake. I’m not sure where it originated, but after some Googling, it looks curiously similar to the one on the Libby’s Pumpkin can. 🙂 That said, the cake is easy to make, perfectly pumpkin-y, and perfectly spiced.

If you’ve never made a cake roll before, don’t worry. It’s EASY. I’ll include some tricks and tips below, and you can check out this post for a video.

The difference between this recipe and all the other basic pumpkin cake roll recipes out there? THE FILLINGS. Yes, fillings plural; there are TWO!

First, I coated the cake with a generous helping of caramel ganache. Oh, you’ve never heard of caramel ganache? It’s something I “invented” several years ago as a filling for a banana cake. You melt Kraft caramels with heavy whipping cream, let it chill until it’s a soft-solid, then you whip it with a hand mixer. The result is a creamy spreadable caramel that’s the perfect cake or cupcake filling.

Instead of a traditional cream cheese frosting, I used my favorite cream cheese whipped cream. It’s been one of my favorite frostings, ever since I made my Strawberry Shortcake Cake Roll last spring. It’s easy to make, whipped and fluffy, and the perfect filling for the spicy pumpkin cake.

Think making a cake roll is too hard? It’s not, I promise.

Here are some tips for the PERFECT cake roll, every time…

I hope you enjoy this caramel pumpkin cake roll recipe! 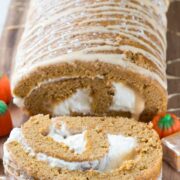 For the Caramel Ganache: 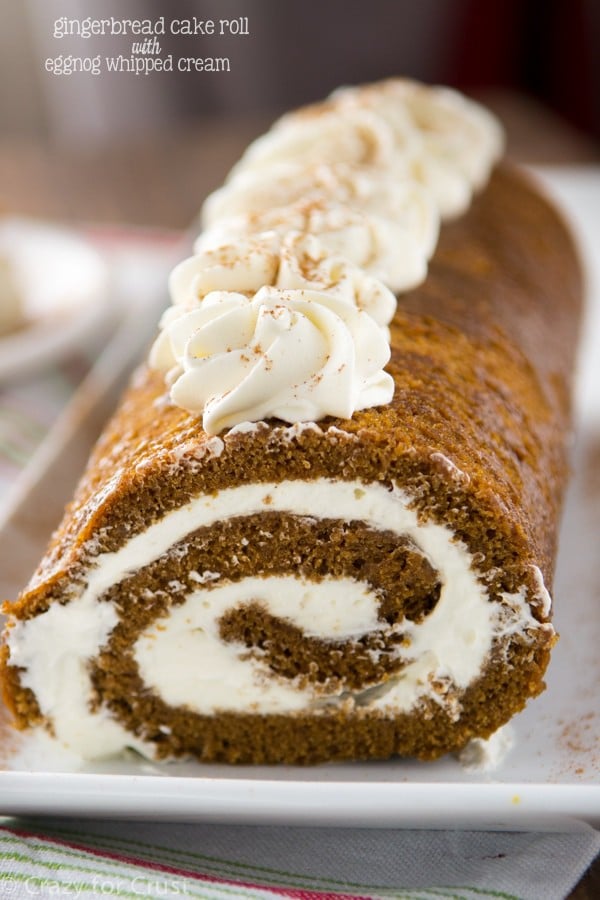 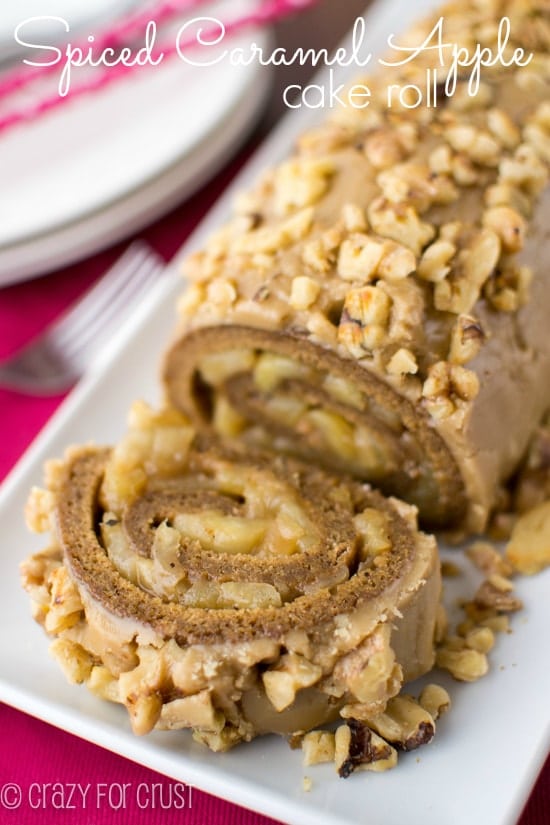 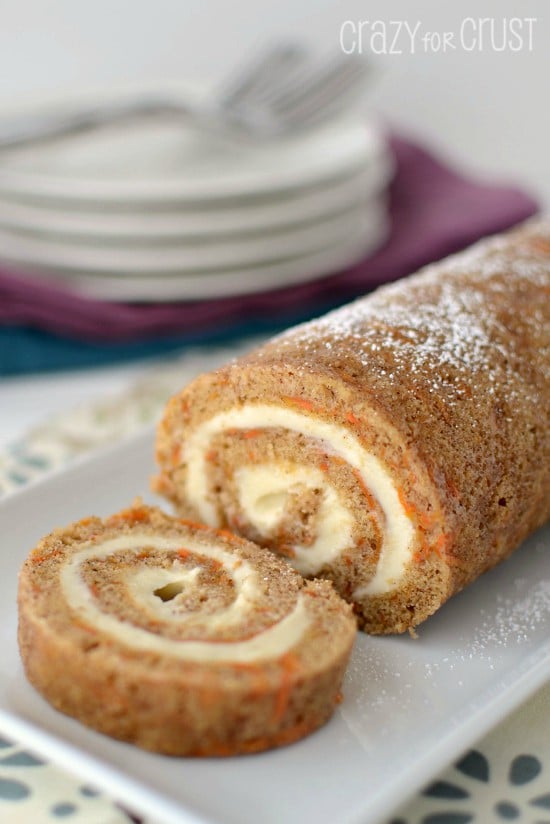