They’re basically a cupcake filled with a rich chocolate ganache – they’re SO rich and easy to make!

Things that I find magical:

Unicorns (they DO exist)

Love and being with my family.

Snagging the first parking spot in the Walmart Parking lot. (If that’s not magical, I don’t know what is.)

Even better: making molten lava cake out of cake mix!

When I was a kid, I seriously thought that chefs did something magical to make the chocolate “lava” flow out of the center of a cake. Why didn’t it bake? How is it melty like that? It must be magic!

As an adult, I have come to understand the workings of the molten lava cake magic trick: ganache. But it’s still magical. Especially in red velvet cupcakes!

What is a Lava Cake?

A traditional Molten Lava Cake (aka Molten Chocolate Cake) is a cross between a soufflé and a flourless chocolate cake. When you dig your spoon into the center of the cake, the chocolate center flows out like lava, get it?

Now, these aren’t traditional lava cakes – they’re lava cupcakes – and they’re made with ganache. But they’re easy to make and SO GOOD, so they’re a good starting point if you’ve never made lava cake before.

I started with a red velvet cake mix. You could use my red velvet cupcake recipe, but I hate making red velvet from scratch. One reason: food coloring.

Am I the only one who manages to get red food coloring over all-the-things when working with it? Droplets that you find for weeks? I barely have to look at my food coloring basket and all of a sudden I have red fingers and blue drops all over my counters.

So, to save my sanity, I made a red velvet cake mix and lined a cupcake tin with liners. Fill up the liners only about halfway – not the usual 2/3 full, otherwise they will spill over.

Then it’s time for the secret ingredient: chocolate ganache!

Make chocolate ganache for the center of the cupcake

You make a simple truffle mixture for the center of these cupcakes.

Once the cupcakes are baked, you let them cool only slightly, then remove the wrappers and get them ready to serve. When you cut open the cupcake (when it’s still warm) you get a gooey chocolate center.

It’s not super lava, but my lava cupcakes are just as good as a molten lava cake!

Serve these warm, without the wrappers. If they’ve cooled, just heat them in the microwave for a few seconds. Dust them with powdered sugar for a delicious special dessert! 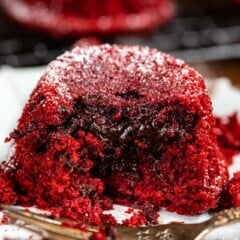