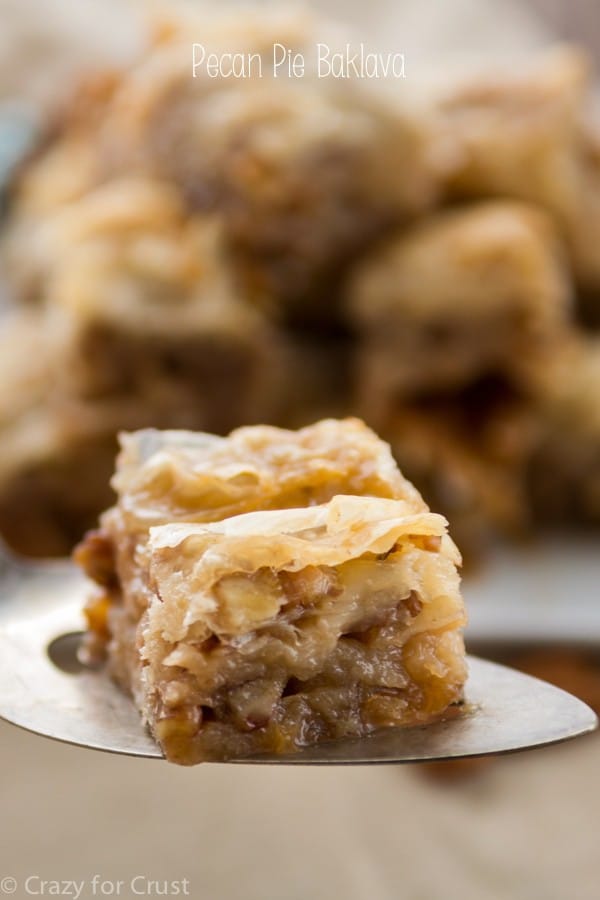 Pecan Pie Baklava. Yes, you read that right. I took pecan pie and turned it into baklava.

{Your yoga pants love me right now, don’t they?}

Last week Jordan told me she was hoping Santa would bring her another American Girl Doll for Christmas this year.

{Yes, another. He’s been very generous and brought a bitty baby and 2 dolls over the past 6 years.}

I immediately put the kibosh on her idea, “Santa is no longer working with American Girl, sorry.”

“Then you can get Julie for me,” she answered. Girl has an answer for everything.

I think that stopped her in her tracks. Here’s hoping. 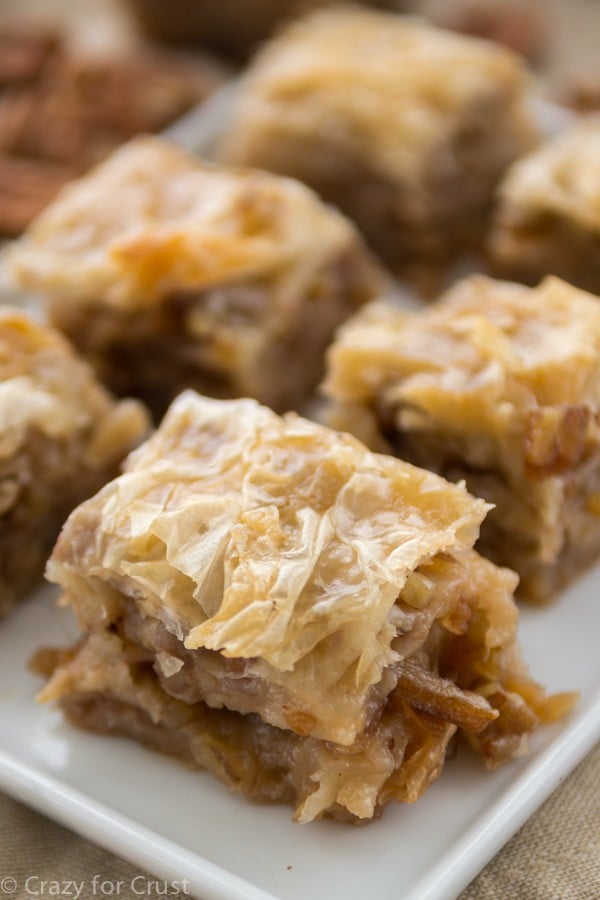 I mean, really. I can actually put my money behind the cost of the doll, because it’s a quality product that doesn’t look like it’s going to murder me in the night. It’s all the stuff that goes with it that really bugs me.

Allow me to introduce you to American Girl Absurdness, 2014 Edition:

First up, the super cute Dining Table and Chairs for $95. I mean, a girl’s gotta eat, right? But folks, read the fine print. Those pretty chair covers? Are an extra $34. (I’m pretty sure I could get an actual table and chairs at Walmart for my family for $129.)

Next, the Sunset Sleepover Tent for $85. And no, your daughter cannot sleep in the tent – it just fits the dolls.

And the piece de resistance: Samantha’s Ice Cream Parlor with everything you need to sell fake ice cream to your dolls. It’s only $300!

I mean, don’t get me wrong. If I was rich and had money to burn (do those people really exist, outside of the Kardashians?) I’d buy it all too.

But I’d still make fun of it. Because love it or not, you gotta agree with me in it’s ridiculousness.

A few years ago I made Peanut Butter Baklava and that rocked my world (yours too, y’all love it). Ever since then I’ve been itching to make another version.

This baklava has layers of phyllo dough that are sandwiched with tons of pecans and butter. If you’ve never worked with phyllo before, don’t be scared. Just make sure to keep it damp while you’re working with it because it dries out fast. I keep it covered with plastic wrap and a damp kitchen towel.

Also? The path to baklava success is paved with butter. Lots and lots of melted butter! It’s brushed in the pan and between each layer of phyllo.

Then, once it’s baked, you pour a sweet syrup over the top. Traditionally, baklava syrup is made with sugar, water, and honey. To get the pecan pie flavor, I substituted dark corn syrup for the honey and voila: Pecan Pie Baklava.

This dessert is a little gooier than a traditional baklava, but that’s what I was going for. Pecan pie is gooey and sweet…and so is this.

If you want a non-traditional pecan pie this year at Thanksgiving or Christmas…make pecan pie baklava. It’s totally worth it. 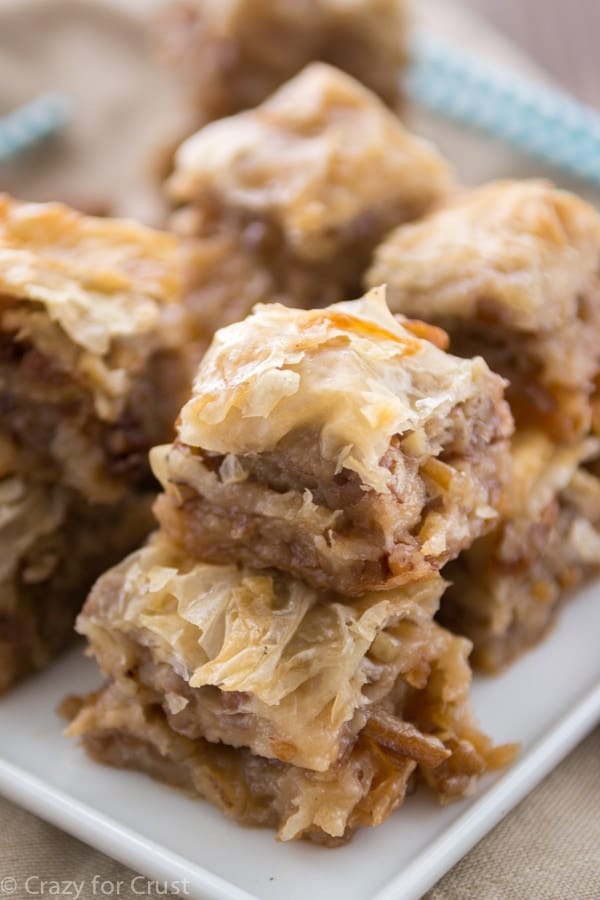 I wonder what a toy version of baklava would cost at American Girl? Since breakfast over there costs $58…I don’t even want to know. 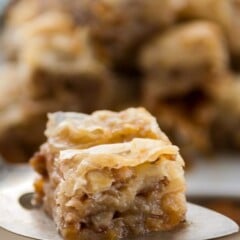 4.43 from 7 votes
Take a pecan pie and make it into a flaky baklava treat! Layers of flaky phyllo dough are sandwiched with pecans and a sweet syrup reminiscent of pecan pie!
Prep Time 45 minutes
Cook Time 30 minutes
Yield 36 squares
Save RecipeSaved!Rate RecipePrint Recipe 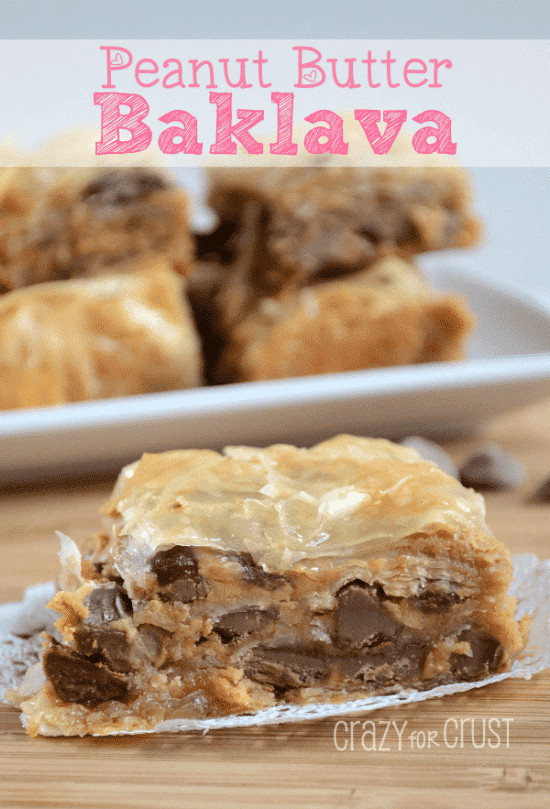 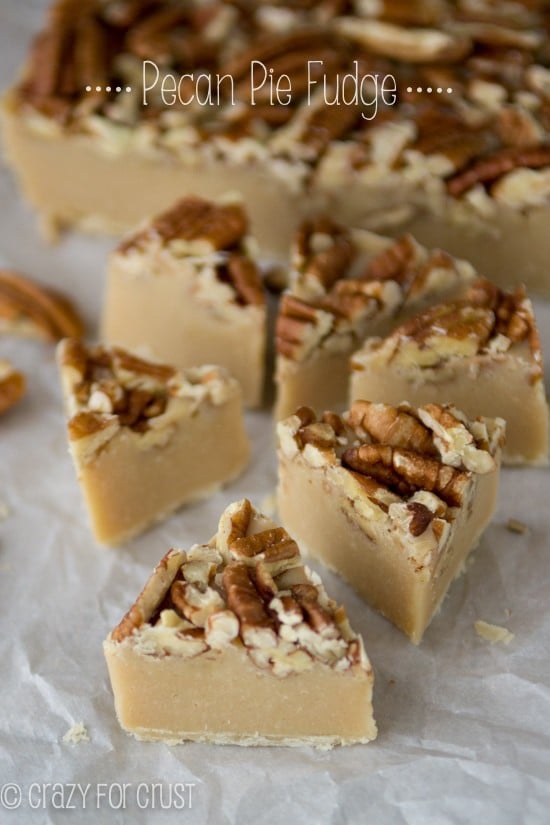 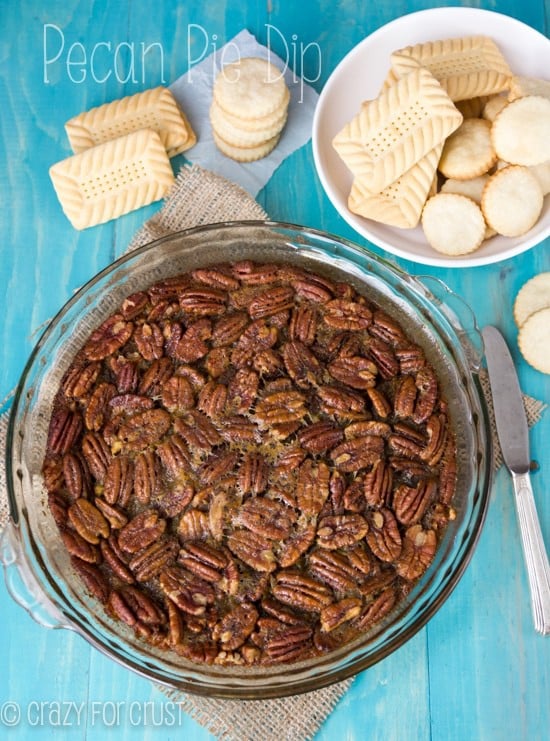