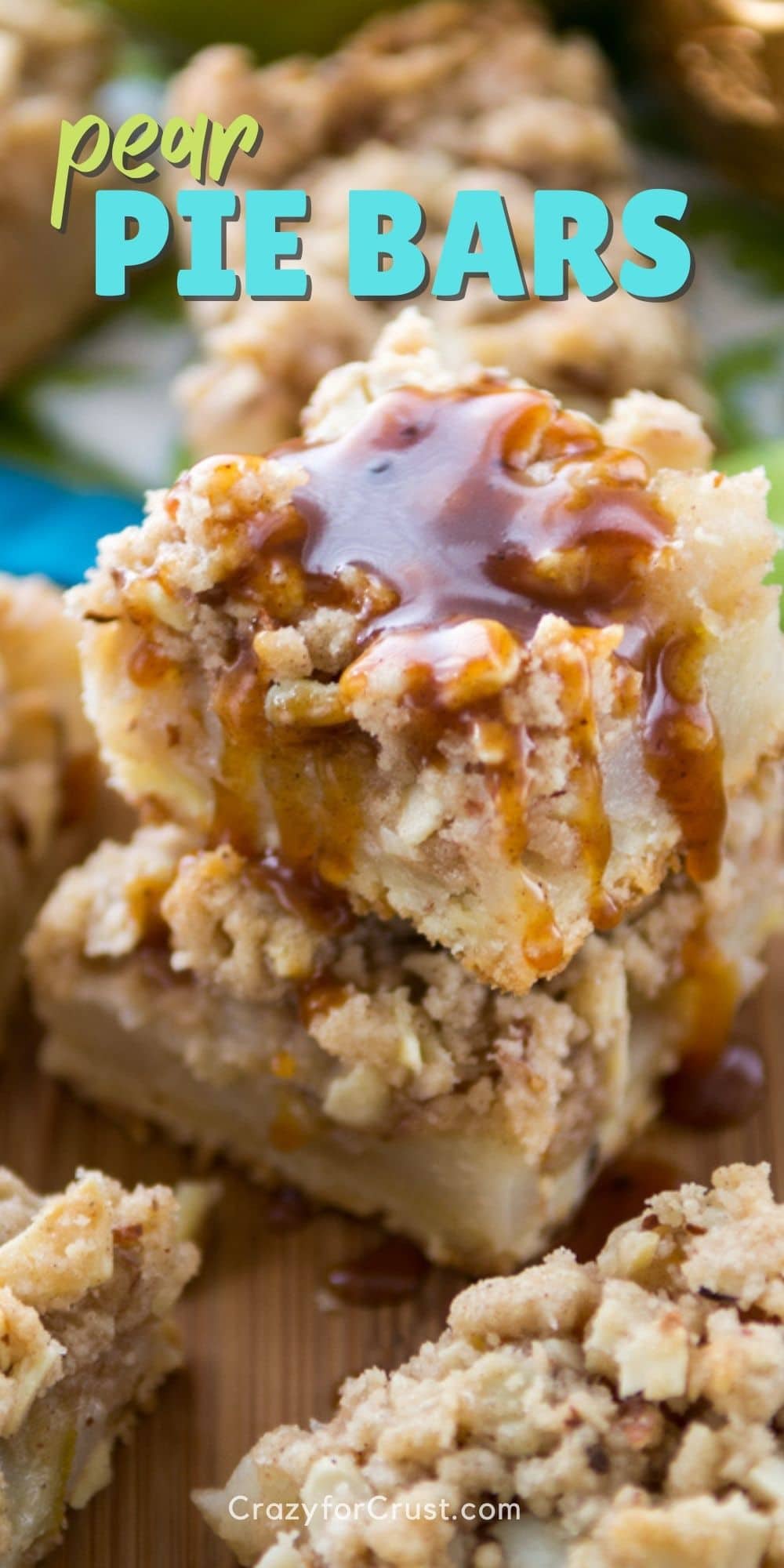 Pear Pie Crumble Bars are a great substitute for pie. As much as I love pie, I almost love pie bars even more. They’re portable, easier to cut, and the crust: filling ratio is weighted in the crust’s favor.

Add some pears to that ratio and you’ve got one heck of a crumble bar.

When I was a kid, we ate pears from the can almost weekly. They were my favorite fruit, I think. I also remember begging my mom to let me drink Kern’s Pear Nectar in lieu of vegetables with dinner. She often said yes.

I never ate pears in anything, like pie, until college. And I have to admit: when I had my first slice of pear pie one year I was not impressed. You know how I hate apples that aren’t soft in pie? Those pears in that pie…ugh. I can still remember how I almost couldn’t swallow them. I think, because of that pie, I didn’t eat pears for years.

What are Pear Pie Crumble Bars?

These pear pie crumble bars are made up of three components:

If you love pear, check out my Caramel Pear Galette!

Butter: You can use unsalted or salted butter (see recipe notes).

Flour: This is used in the topping and the crust. Be sure to use all-purpose flour.

Almonds: Gives the crust and crumble a nice crunch!

Pears: Use perfectly ripe pears (not too soft). And just like I prepare apples we’re going to par-cook them so they’re the perfect texture inside the bars.

How to make Pie Bars with Pears

These Pear Pie Crumble Bars remind me a lot of apple pie, but the flavor is distinctly pear.

How do you serve pear pie bars?

You can serve them with ice cream or whipped cream. You can eat them by themselves. But if I were you, I’d douse them in caramel sauce. Because caramel sauce (homemade or store bought) is goooooood.

What pears are best for making pear desserts?

Use your favorite kind of pears but make sure they’re not over-ripe. You want them mostly firm with a little give.

What pan do you use to bake pie bars?

I made this recipe in a 9×9″ pan instead of a 9×13″ pan and I think that was the best idea I’ve had yet. The smaller pan increases the crust : crumble : filling ratio. I always want more of the first two, less of the third. 🙂 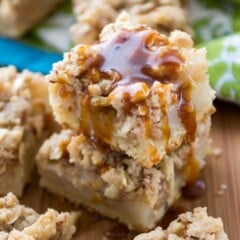 3.82 from 71 votes
These bars are a perfect way to use your pears! A shortbread almond crust is filled with partially cooked cinnamon sugar pears and topped with an almond crumble. Serve these with caramel sauce for a decadent twist on a crumble pie bar!
Prep Time 45 minutes
Cook Time 45 minutes
Total Time 1 hour 30 minutes
Yield 16 bars
Serving Size 1 serving
Save RecipeSaved!Rate RecipePrint Recipe

To use salted butter, omit salt in both topping and crust.