Lemon Meringue Pie – this recipe is a family favorite! It’s an easy pie recipe with homemade lemon filling and sweet meringue. This is a family recipe – my Aunt Tootsie made it for years – and now the recipe is mine to share.

Don’t be scared of making Lemon Meringue Pie. It can be daunting but I’m going to detail every single step for you and show you it’s as easy as it looks!

When I was a kid (and even still), whenever pie is mentioned around my dad, he brings up my Great Aunt Tootsie’s Lemon Meringue Pie. He talks about how the crust was amazing and the filling was so smooth and perfect.

His Aunt Tootsie was his mom’s sister, and I honestly don’t remember ever meeting her. I think, between my Nana and Tootsie, that the latter was the baker in the family. My Nana could bake, sure, but meals were her specialty (and her cookies were actually Pillsbury…which I didn’t know until I was an adult).

By the time I was in my early 20’s, both my grandmothers had passed, and with them, their recipes. My mom’s mom didn’t write anything down, but my Nana had a recipe book that my aunt took when she died. A few years ago, she sent me an envelope full of hand written recipes and newspaper clippings that had been shoved in my Nana’s recipe book. One of them was for my Aunt Tootsie’s Lemon Meringue Pie!

I absolutely love old family recipes. I think the ones that are handed down between generations are some of the best, don’t you agree? Food and memory are intertwined so much; just a bite of a meal your grandma used to make can bring back vivid memories; even sights and smells and sounds from the time you used to eat it. That’s what I was hoping to create with this pie recipe, because I’m going to make it for my dad someday.

Making Lemon Meringue Pie seems like an involved process, and it can be, but it’s worth it.

I would give it a medium on the scale of easy to hard, but this recipe is easy to follow and while it has some moving parts, it’s totally attainable if you follow my recipe and tips below. In this post we’re going to cover every possible roadblock you might have between you and this gorgeous pie.

Traditionally, lemon meringue pie has a pastry crust (as opposed to a no-bake cookie variety). I have a few thoughts on crust:

To blind bake your crust, you’re going to put it in the 9-inch pie plate, poke some holes in the bottom, and line it with parchment paper. Then fill the pie with beans or pie weights and bake it at 425°F. The time it takes to bake your crust depends on the recipe you’re using.

If you are using my pie crust recipe, then you’ll blind bake it through the first baking step in my blind bake tutorial. If you’re using a Pillsbury crust, it will only take about 10 minutes total.

The lemon filling for the lemon meringue pie is an easy lemon curd-like recipe. It’s cooked on the stove, thickened with cornstarch and egg yolks, then strained into the baked pie shell.

First, make sure you have all your ingredients assembled and ready. Whisk your egg yolks in a small bowl and set aside.

Then, whisk the filling ingredients together in your saucepan, cooking over medium heat, stirring often (like you’re making pudding), until the mixture is thick and bubbly. Now it’s time to deal with the eggs.

How to temper eggs:

A scary part about making a lemon curd like this is tempering the egg yolks.

Tempering eggs is just a fancy way of saying that you’re getting them ready to put in the hot custard mixture. If you just pour them into the hot lemon mixture, they’ll scramble (ew) so we have to do it slowly.

Keep cooking for 2 minutes, remove from heat and stir in some butter and then your mixture will be ready. I always strain my filling just in case little pieces of egg have cooked.

Strain your filling to ensure a silky pie filling

Classic Lemon Meringue Pie has a fluffy sweet meringue on top of the lemon filling. This kind of meringue is made by beating egg whites with sugar and then baking on top of the pie and it’s like eating sweet clouds.

The meringue whips up easy with a hand or a stand mixer. A few tips about making the meringue:

Add the meringue on top of the still-hot filling of the pie and swirl the tops into pretty peaks.

Make sure to completely seal the meringue to the pie crust edges. Leave NO gaps to avoid weeping. Bake the pie, then completely cool before slicing.

How to avoid a weepy watery lemon meringue pie:

If you don’t like this kind of meringue topping, you can use my marshmallow meringue frosting instead. In that case, completely blind bake the pie crust, add the filling, let it cool, then top it with that frosting and torch the tops.

Lemon Meringue Pie isn’t really that hard to make, there are just a lot of steps. With a little practice and patience (and a humid day), you can enjoy my Aunt Tootsie’s pie just like we do!

If you’ve made this recipe, consider leaving me a comment and rating below, I’d love to hear from you! 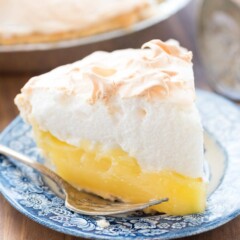 This simple Lemon Meringue Pie is the best! One of our family favorites – made the old fashioned way with a creamy lemon filling and meringue on top! I’ll show you step by step with photos and video just how easy it is to make this homemade pie! 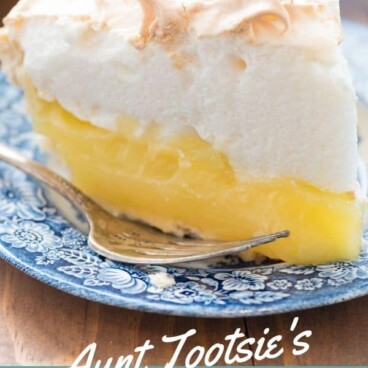 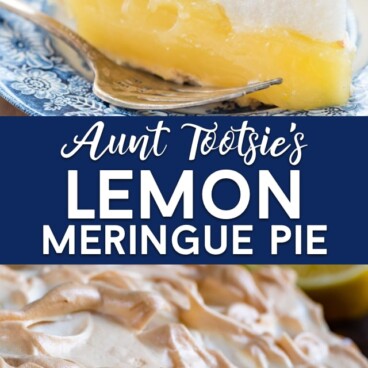