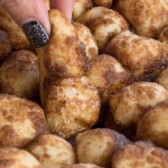 Homemade Monkey Bread is so much easier than you think! This from-scratch version of a cinnamon pull-apart is the perfect brunch recipe!

This post has been sponsored by Fleischmann’s® Yeast and Homemade Monkey Bread is the easiest yeasted recipe you’ll ever make! 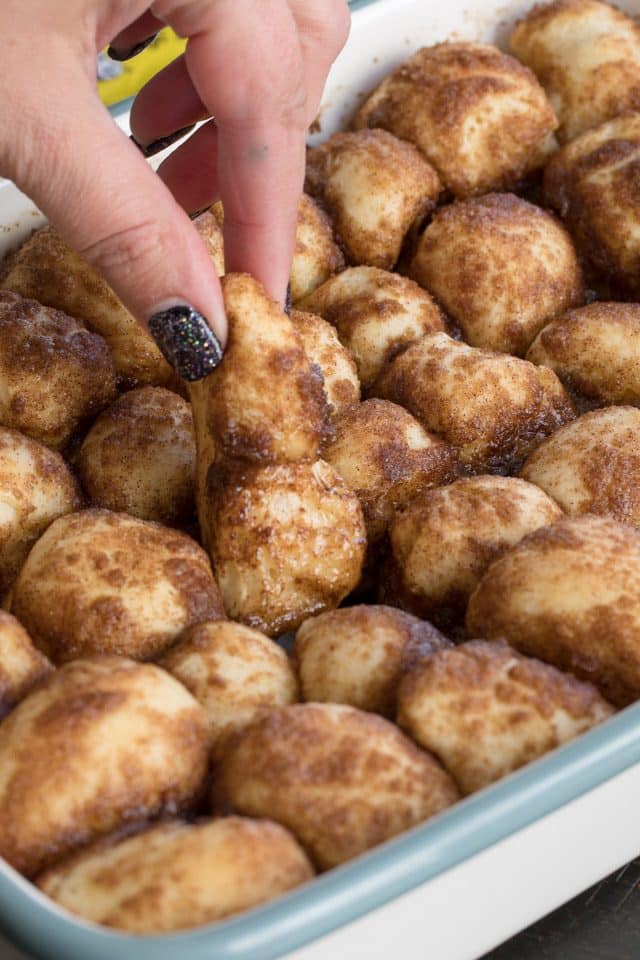 I learned too late as a parent that if you do something for a holiday, it becomes a tradition. Take the Elf on the Shelf: if he brings a typed note from Santa when he arrives…he most certainly will be expected to bring it again. Or if the leprechauns mess up the house when your daughter is 4, she will expect them to do it again and again…and again.

The same thing goes with food: I made monkey bread ONCE for Christmas breakfast, around when Jordan was 3. The following year I was planning to make cinnamon rolls but nope, I was told “MOM! You ALWAYS make monkey bread for Christmas!”

So…I always make monkey bread for Christmas. It’s not worth the fight; one year I really wanted cinnamon rolls so I made both…because it was required.

In the past I’ve always made monkey bread the “easy” way, with those canned biscuits, but no more: from now on I will be making this Homemade Monkey Bread!

Some of you may be wondering why my monkey bread is in a 9×13-inch baking dish and not the normal fluted pan. It’s intentional: I’ve found that making monkey bread without a Bundt pan cooks faster and more evenly. I’m pretty much a pull-apart bread aficionado now after so many years of making it. While it looks gorgeous when you bake it in a Bundt pan, it takes forever to cook and I find that the top gets overdone while the inside stays raw.

To make homemade monkey bread, you need to use yeast. I’m showing you how I make this recipe using Fleischmann’s® RapidRise® Yeast. It’s a fast-acting yeast that makes baking from scratch much easier and faster than if you used active dry yeast. 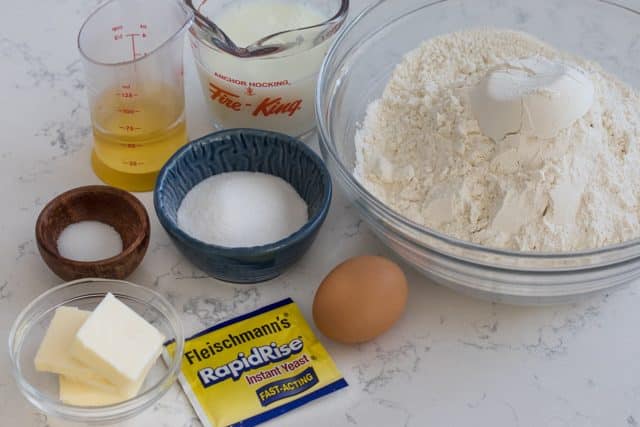 You just need a few ingredients: 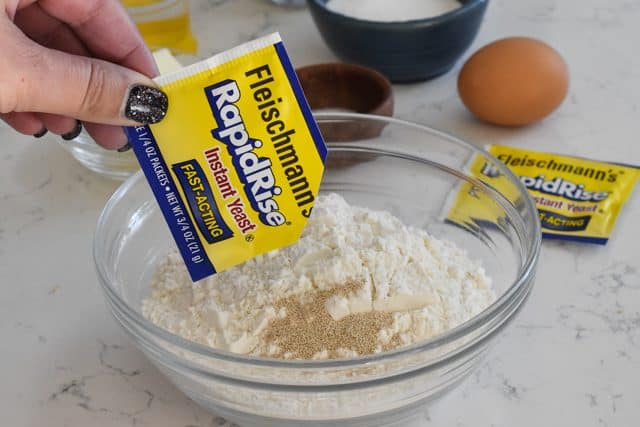 When you use other kinds of yeast (like Active Dry), you have to add the yeast to hot water with sugar and let it sit until it bubbles. The thing I love about using Fleischmann’s® RapidRise® Yeast is that you don’t have to proof it. This takes the guesswork out of working with yeast as well as shaves off some time.

You simply add your Fleischmann’s® RapidRise® Yeast in with your dry ingredients (flour, sugar, yeast, and salt).

Then, in another bowl or measuring cup, you add your wet ingredients. 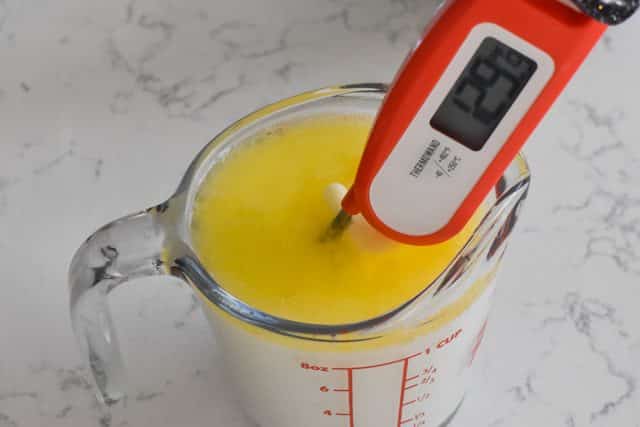 Milk, water, and butter get added to the measuring cup. You can use any kind of milk (regular, low-fat, or non-fat). I added slices of butter instead of a chunk, so it would melt easier.

Once you have your wet ingredients in a microwave-safe dish, simply heat it until it’s about 120-130°F. This will wake up the yeast once it’s added to the dry ingredients.

I recommend an instant read thermometer for working with yeast. It really does take the guesswork out of it, but if you don’t have one just think hot bathwater when testing temperature. 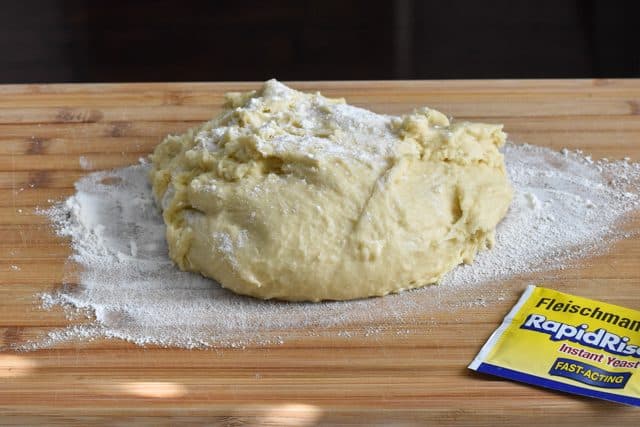 This homemade monkey bread recipe is written to be made with an electric mixer fitted with the dough hook. I absolutely love my dough hook; it takes time off of having to knead my dough. If you don’t have an electric mixer, you can do this with a hand mixer or by-hand, it’ll just take longer to come together to form a ball.

Once the dough is mixed (it should be soft to the touch but not have much transfer to your hands when touched), turn it out onto a floured surface and knead it until it forms a ball that springs back at you.

Then, let it rest for just 10 minutes. No need to wait for an hour to let it double in size! (That’s another advantage of using Fleischmann’s® RapidRise Yeast.) 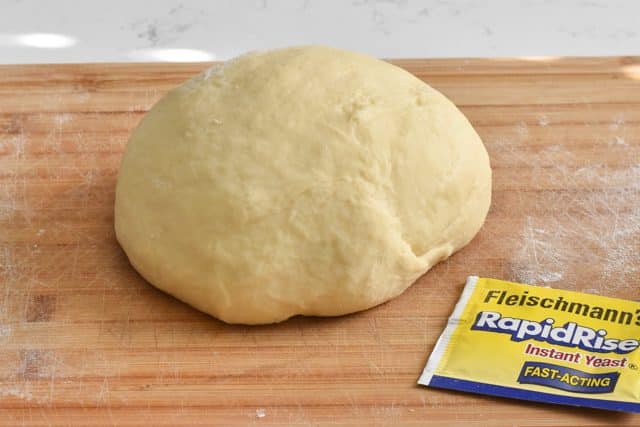 Now it’s time to form your monkey bread. If you simply rolled out this dough, you could make cinnamon rolls, but we’re going to portion the dough into 36 small balls of dough. 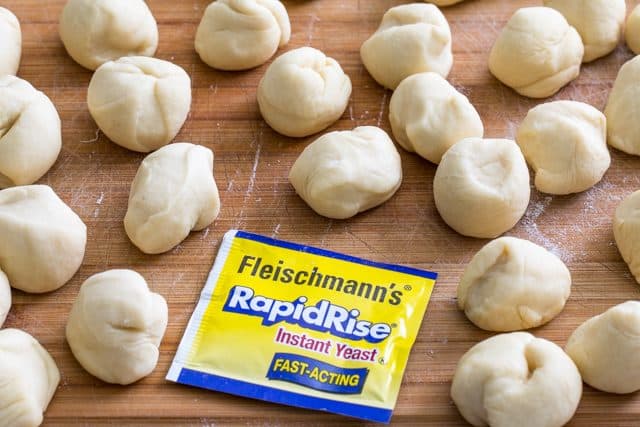 Simply melt butter in one bowl and mix brown sugar and cinnamon in another. Dip the pieces into the butter then roll in the cinnamon sugar and place in your pan.

Again, I used a 9×13-inch baking dish, but you can use two bread pans, a Bundt pan, or even make muffins! (Directions for all are in the recipe card.) 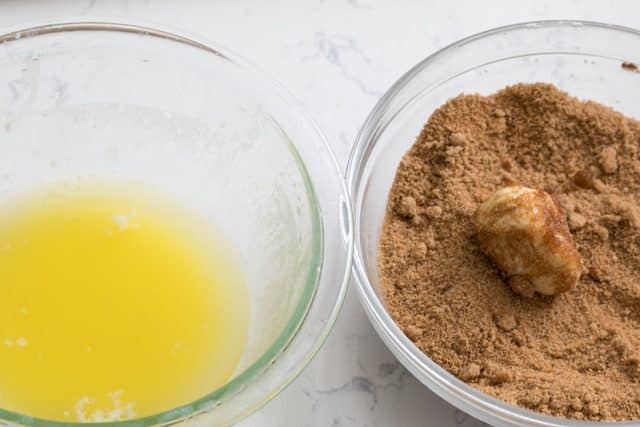 After you’re done dunking and rolling, you’ll have some sugar and butter left over. Mix them together and pour over the monkey bread in the pan.

You do have to let the rolls rise until doubled in size. It only takes about 45 minutes in a warm place. (Tip: preheat your oven and let the rolls sit on top of the stove. The warmth from the oven will help them rise faster.) 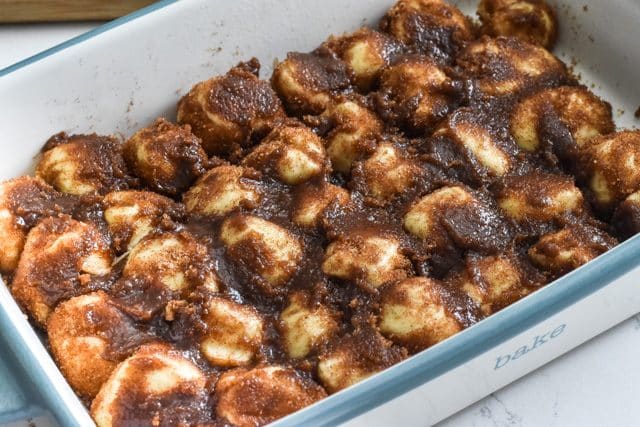 Once they’ve risen, just bake for about 20 minutes and then serve. They pull apart easily and are sweet and fluffy. We could NOT stop eating them!

Making a Monkey Bread Recipe from scratch is much easier than you think and perfect for brunch or even dessert! 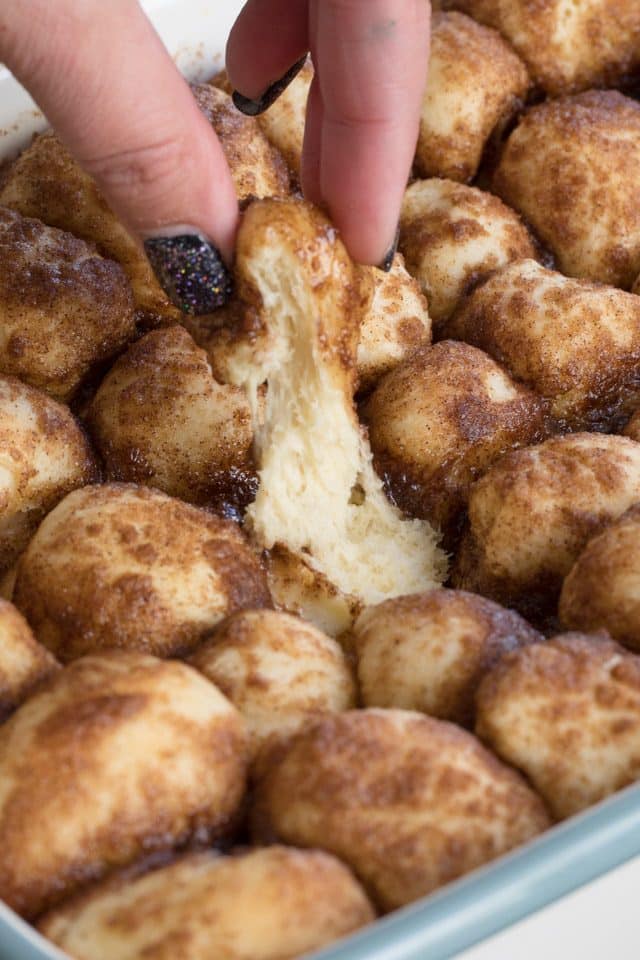 Working with yeast is so easy; once you start you’ll want to make all the yeasted recipes! Use Fleischmann’s® RapidRise® Yeast and let me know what you make by tagging me on social using #crazyforcrust! 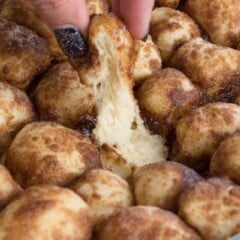 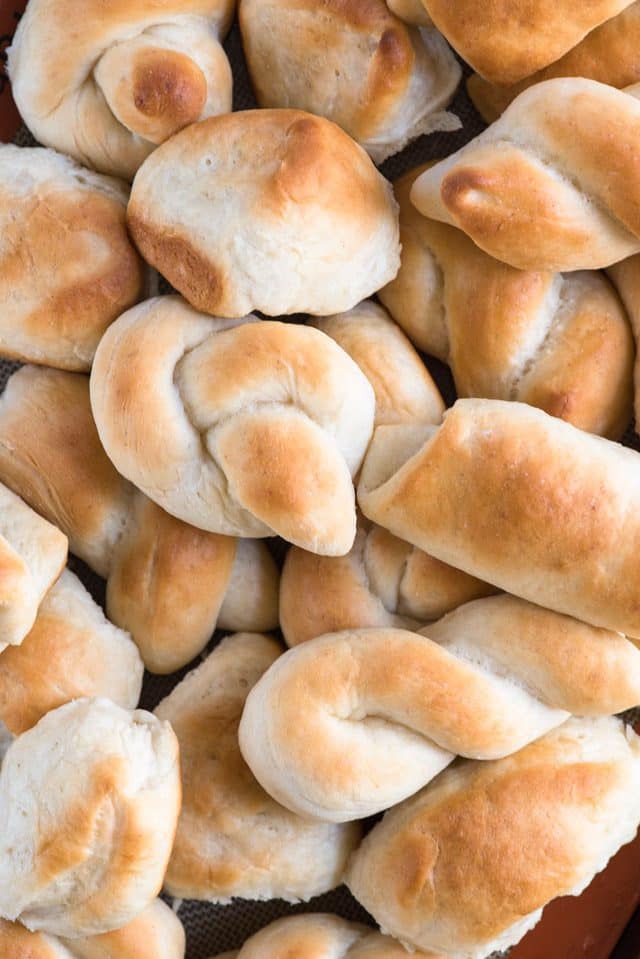 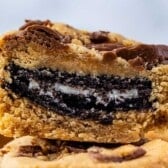