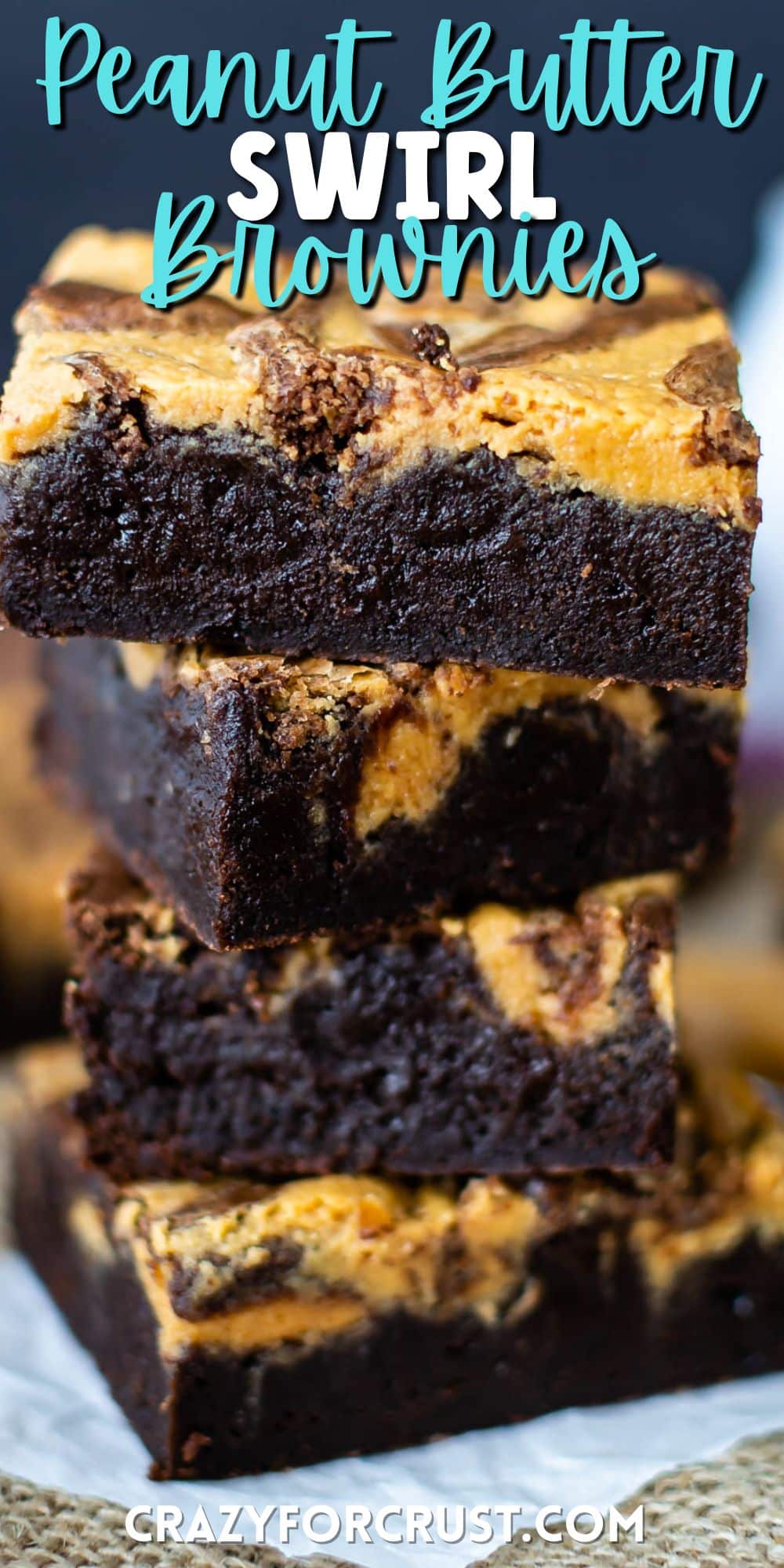 These Fudgy Peanut Butter Swirl Brownies are SO delicious, you might cry. They’re a rich and decadent brownie recipe topped with a gooey peanut butter. Once baked they’re so fudgy and peanut buttery you’ll have to eat more than one.

Last Monday, I was sitting in my car at Jordan’s dance class, minding my own business, waiting for her to be done, when I look up and a man is driving a big truck in the parking lot wearing a ski mask.

Now, my first thought was “is there a bank nearby?” but there isn’t. I did, however remember there is a liquor store in the corner of the shopping center. I began to panic, thinking I am the only witness to a robbery. The guy is going to go in and steal some Wild Turkey or something and try to get away in his huge white truck with his ski mask on and I’ll be the only witness – if he lets me live.

Then, the truck stops driving, and pulls into a parking spot in front of Jordan’s dance class. I started to sweat. In the approximately 1.5 seconds since I first saw ski mask dude driving, I am now convinced he is not going to rob the convenience store, but instead go in and hold 5 little girls hostage. In a second I’m freaking out because I’m the BAD MOM who wanted to sit in her car instead of listening to the incessant jabbering of the owner and her mother, who is obsessed that I am still wearing flip flops in November.

Instead, I’ll be stuck outside while my daughter is being held hostage by a ski mask driving white pick-up truck man. #momfail

As I’m about to dial 911 or shout or do…something…a girl hops out of the truck. She runs inside and joins Jordan’s dance class. The truck drives off.

So it appears that one of the girls in Jordan’s dance class has a psycho for a father. One who thinks it’s okay to drive around town wearing a ski mask freaking out other parents.

Yeah, dads? Don’t drive wearing a ski mask. Unless you buy me a bottle of vodka at the liquor store, mmkay?

Thank God I came home to these Fudgy Peanut Butter Swirl Brownies. They were just what I needed.

I mean…peanut butter. And brownies. Is there anything better?

This is my standard brownie recipe that I’ve been using for about a year now. You can make them in a 9×13″ pan for a thinner brownie, or in a 9×9″ pan for a thicker and extra super fudgy brownie.

You can frost them with orange frosting, or coconut frosting. You can stuff them with Oreos or make them into truffles. This is the BEST brownie recipe!

The recipe includes three kinds of chocolate: melted unsweetened and semi-sweet, and cocoa powder. You can use regular cocoa powder, or you can use Dark Cocoa Powder. If you’ve never used Dark – DO IT. It gives it such a rich and fudgy flavor, seriously you’ll cry.

FYI, my daughter hates dark chocolate. She avoids it at all costs. She ate these brownies and loved them. It doesn’t make them unsweet-dark, it just gives them an extra layer of flavor and adds richness. It’s like eating fudge. But it’s a brownie.

They blow your mind.

Best brownies ever. Perfect for a note of chocolate at Thanksgiving, and especially perfect for your holiday treat platters. 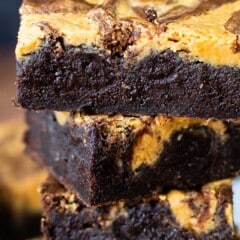 For the peanut butter swirl:

Sweets from friends:
Oreo Cream Brownies by Something Swanky
Samoa Brownies by Chef-in-Training
Thick and Fudgy Toffee Brownies by Handle the Heat