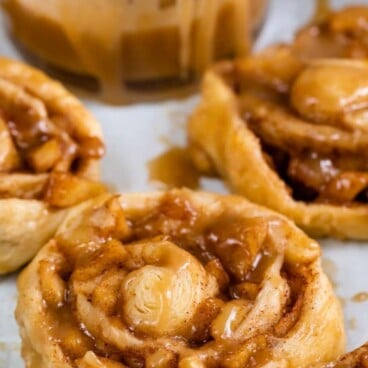 These Caramel Apple Cinnamon Rolls come together quick! You don’t need any yeast, and you don’t even need to make the dough – we’re using crescent rolls to make them. They are filled with homemade cinnamon apple filling and topped with a caramel frosting that you’ll want to eat with a spoon!

But that doesn’t mean we don’t ever have cinnamon rolls. These days, instead of reaching for the yeast, I reach for the crescent rolls and make these caramel apple rolls. They’re just like regular rolls but made so much easier.

Butter: I liked to use unsalted butter. You’ll need butter for the frosting and the apples.

Apples: I prefer using Granny Smith but you can do this with Fuji, Gala, or a Golden Delicious apple too. You’ll want to dice these small – use my favorite apple peeler to help you out.

Sugar: You’ll need granulated for the apples and brown for the frosting, but you can use brown sugar for both in a pinch.

Crescent Rolls: This is where the semi-homemade magic comes in. Grab one can of 8 rolls (any brand).

Heavy Whipping Cream: No substitutions here – you need it so the frosting sets up.

Powdered Sugar: For the frosting.

Vanilla: For flavoring the frosting.

Step 1. Cook the Apples: Place butter in a small skillet and melt it over low-medium heat. Add the diced apples, cinnamon, and sugar. Cook the apples, occasionally stirring, until they start to turn translucent. This will take about 15 minutes. Once they are cooked, take the skillet off the heat and let the filling cool while preparing the dough.

I cook my apples before adding them to the crescent rolls. I like a cooked apple in recipes better because then they aren’t rubbery.

Step 2. Assemble: Take the dough out of the tube and unroll them. There will be perforations on the dough, which you will want to press together so you have one large rectangle. Spread the cooled filling over the dough and then sprinkle cinnamon and sugar over the top.

Step 3. Roll, Slice, Bake: Starting at one of the shorter ends, roll the dough up like a jelly roll. Do this as tightly as possible, so the filling stays inside. Slice the roll into eight equal-sized pieces. I like to use a serrated knife, so I don’t squish the dough while slicing it. Bake the rolls at 350°F for 11 to 14 minutes or until they golden on top.

How to Make Homemade Caramel Frosting

While the cinnamon rolls are baking, you can make the frosting.

Step 4. Cook Butter and Brown Sugar: Place the butter and brown sugar in a pan and cook them for two minutes while stirring continuously.

Step 5. Powdered Sugar: Remove the pan from the heat and whisk in the powdered sugar.

Step 6: Cream: Then whisk in the cream and vanilla and it’s time to frost your rolls.

The frosting is more of a drizzle until it cools. Once it cools it’s hardened, so if it cools too much before you use it just microwave it a few seconds and stir and it’ll thin right out.

Can you use crescent rolls to make cinnamon rolls?

Yes, and it’s really easy! Instead of breaking the dough apart into triangles to make crescent rolls, you can keep the dough in one large rectangle. Then, add your filling, roll it up, slice, and bake.

What can I substitute for the crescent rolls?

f you don’t have access to refrigerated crescent rolls, you can use pizza dough instead.

You can store them at room temperature for a day or two. Or keep them in the refrigerator for three to four days. Either way, keep them wrapped, so they don’t dry out.

If you want to freeze them, I recommend freezing them before you bake them. First, make them as instructed, and then place them in a freezer-safe pan and wrap them tightly. When you are ready to bake them, thaw them for a day in the refrigerator before baking.

My caramel frosting is clumpy. What happened?

Crescent rolls are the secret to the easiest cinnamon rolls ever! And cinnamon rolls with apples and that decadent caramel frosting? The best breakfast or brunch treat, especially during the fall when it’s all about cinnamon, caramel, and apples. So, make them – you won’t regret it! 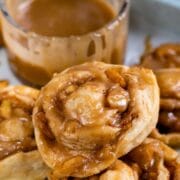 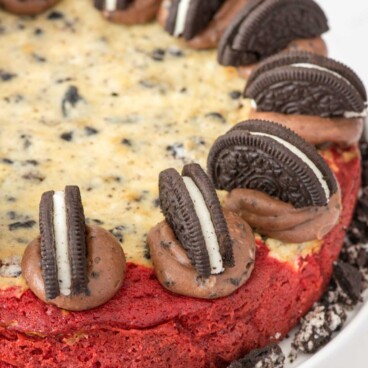 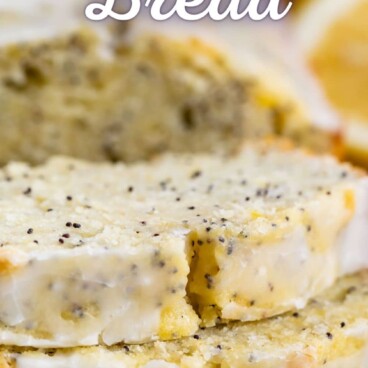 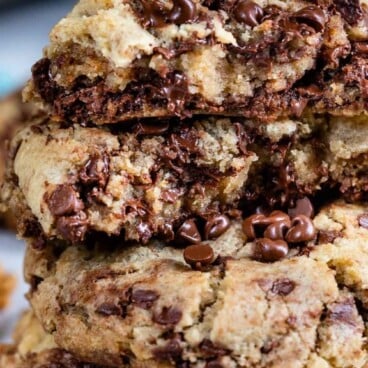