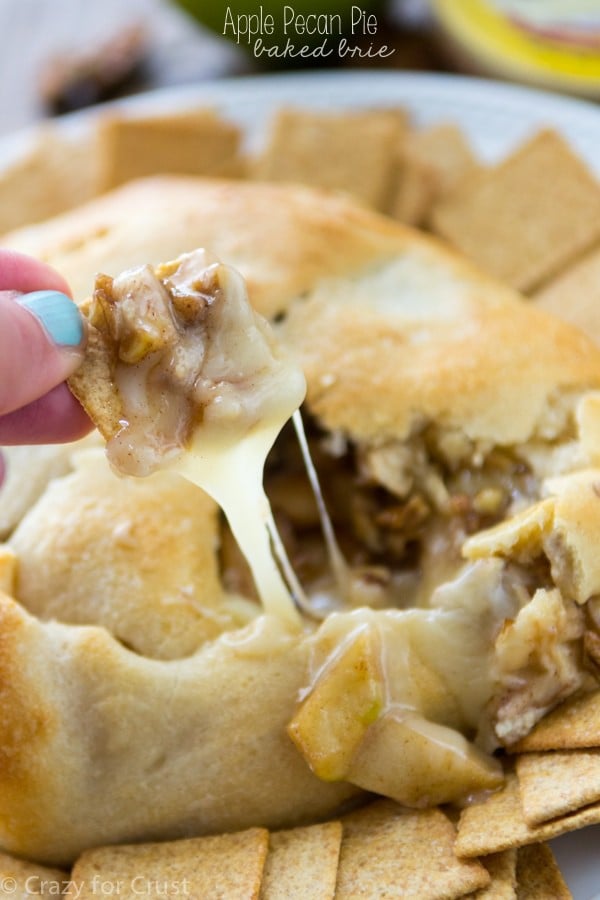 Apple Pecan Pie Baked Brie: The best party dip! Apples and pecans are cooked until soft and baked with sugar and brie in a crescent roll crust.

Hands down, baked brie is my favorite party appetizer. I know, I know, this recipe is not a traditional dessert. But this Apple Pecan Baked Brie kind of tastes like it…and I could eat it all day and all night long. I think that qualifies it for a spot on this here old blog, don’tcha think?

I discovered brie about 13 or 14 years ago, probably at a holiday party. It was baked, it was creamy, and you got to spread it all over slices of baguette. Bread and cheese: is there anything better? From that day forward every single party included a wheel of brie. Sometimes I baked it, sometimes I just put it alongside some gorgonzola and white cheddar. Sometimes I’d buy a slice and eat the whole thing myself.

Then I got pregnant, in the summer, which meant I was knocked up during the holidays. Back then, it was a big NO NO to eat brie while growing a kid.

That was probably the worst holiday season of my life. #notjoking #firstworldproblems

It about killed me not to eat brie (let alone coffee or alcohol) for  9 straight months. I’ve since made up for my brie-lacking months. It’s gotten to the point that I can’t even bring it into my house or I’ll eat it all. 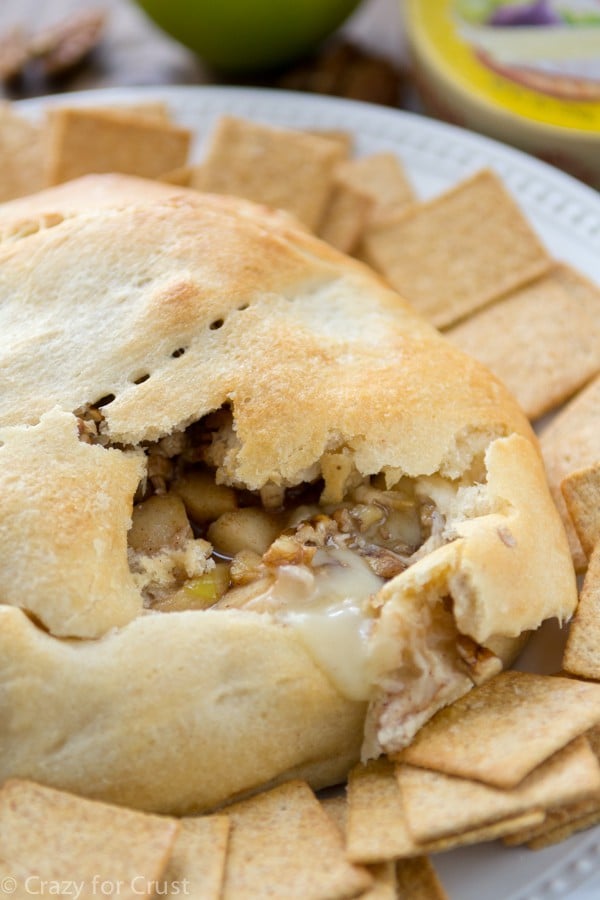 A few weeks ago I was craving a baked brie. The oozy gooey sweet cheesy treat was just calling my name. Luckily, we had company over that day, so I made this Apple Pecan Pie Baked Brie. Because if there had been no company? I’d be about 5 pounds heavier.

This is not a traditional dessert recipe, but it fits quite nicely here on this blog. First, it’s got a combination apple and pecan pie on top. That’s dessert.

Second, it’s kind of got a crust (see the crescent roll wrapper?)

Third, some countries serve cheese for dessert. I mean, that’s just weird to me – if I see a cheese plate after my main course it better be followed by some chocolate fudge brownies or I’m gonna blow a gasket. But still, somewhere in the world this would be dessert.

Have I justified this enough for you? Yes? Good.

Apple Pecan Pie Baked Brie is your new favorite holiday appetizer. It’s easy and so cheesy and everyone LOVES it! 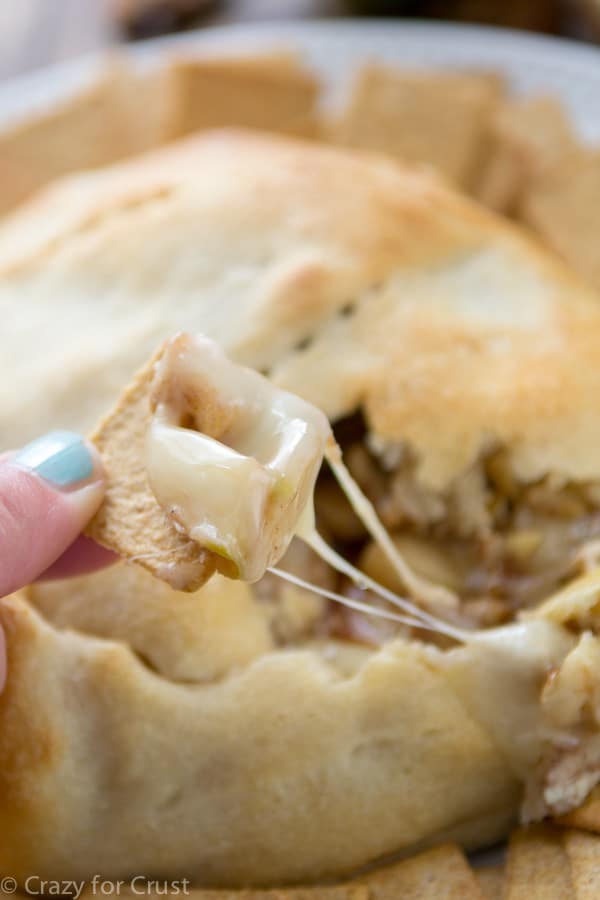 This is such super simple party recipe, and in theory it feeds a lot of people.

Let’s break it down this Apple Pecan Pie Baked Brie:

Once it’s baked the cheese gets gooey and mixes with the brown sugar and pecans and apples and….

Before we go, I’m going to let you know another important point: this Apple Pecan Pie Baked Brie is a Mel approved recipe. I know, right? But, there you go. #MelAteIt 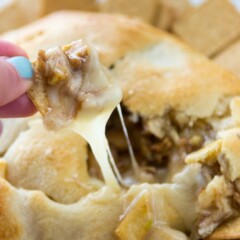 Also check out these brie recipes I also love: Pecan Praline Baked Brie by Something Swanky, Cranberry Baked Brie by Chef in Training, or Baked Brie with Balsamic Cherries by Averie Cooks. 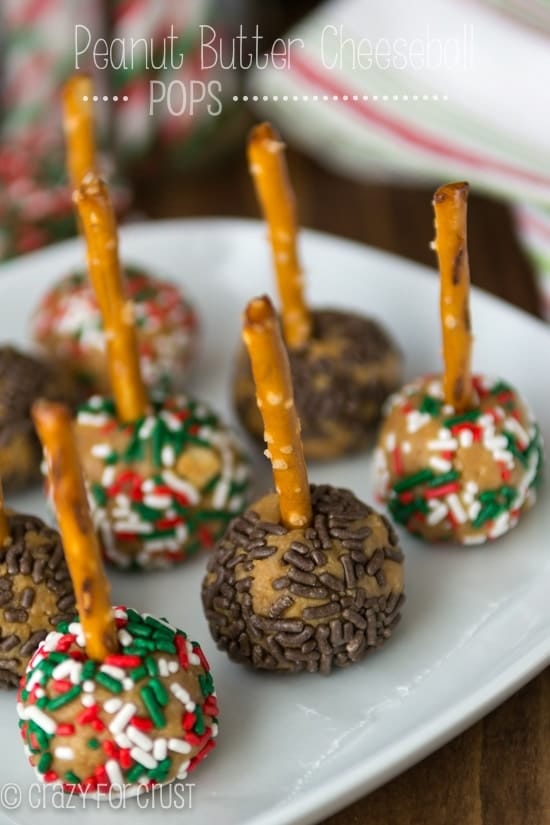 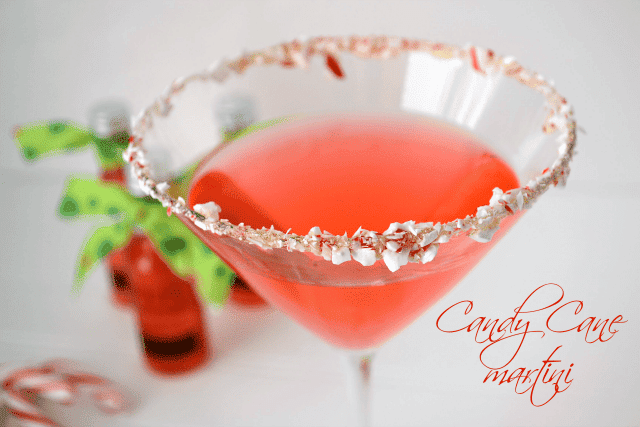 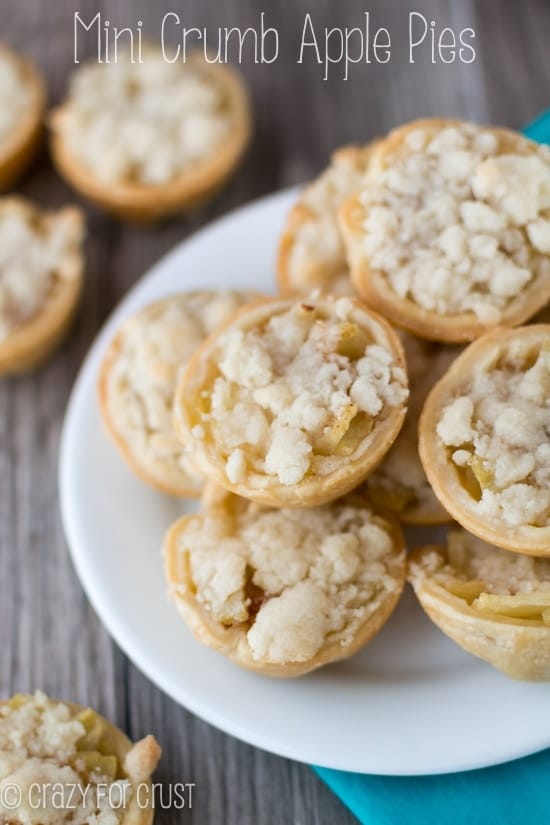 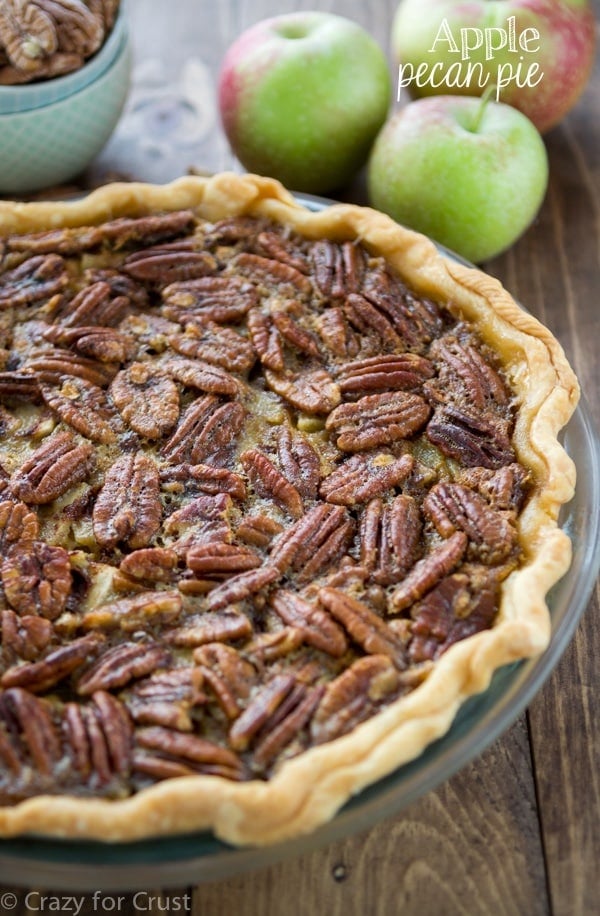