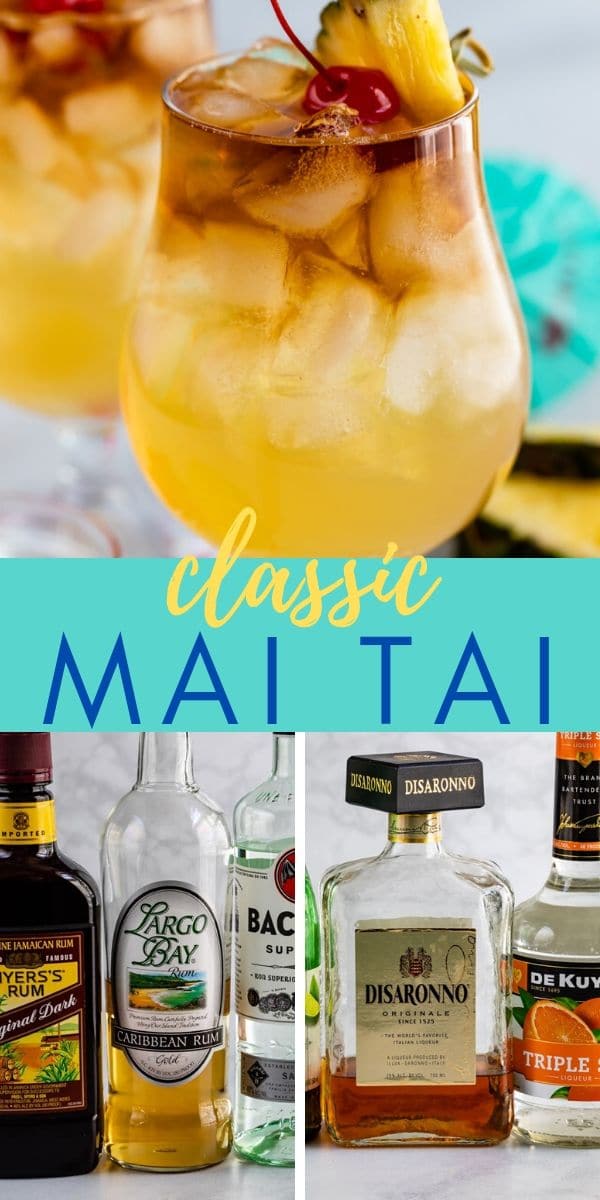 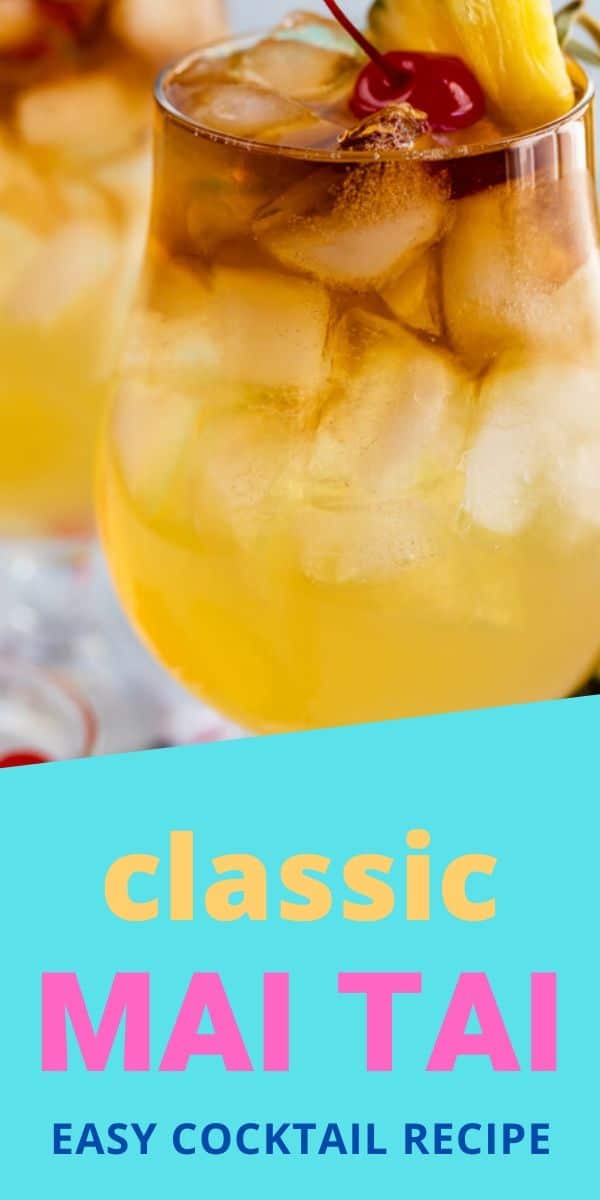 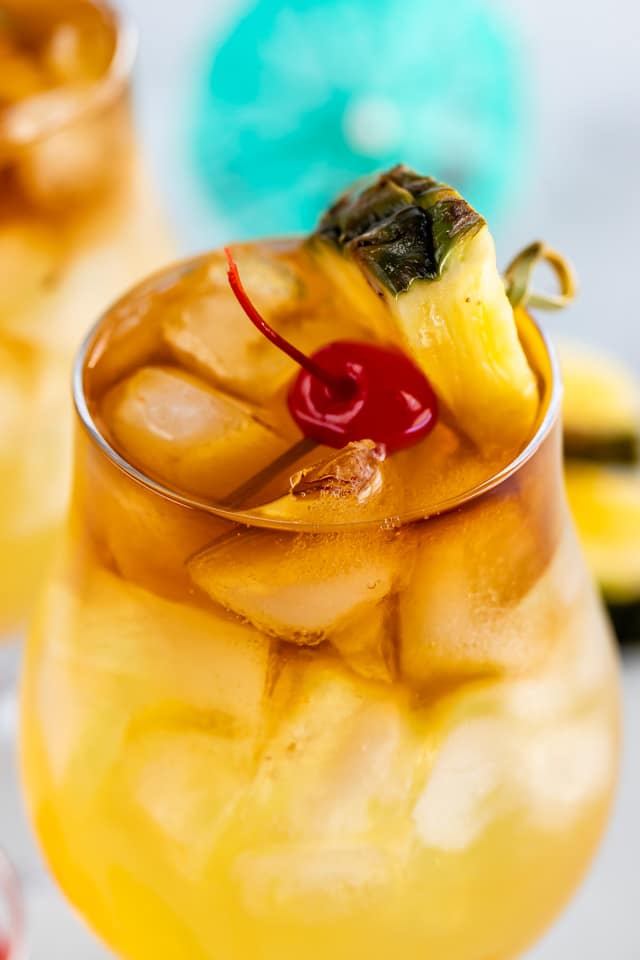 This is the CLASSIC Mai Tai Recipe you’ll get in Hawaii! Can’t go to the beach? Make this easy recipe and transport yourself to the tropics.

I miss the beach! We don’t have any tropical trips planned, so I think it’ll be awhile before we’re on the sand again.

One of my favorite things to do on a tropical (or, really, any) vacation is to sit in a lounge chair by a resort pool (preferably with a view of the ocean) and order cocktails while reading a good book. Mai Tai Cocktails are one of my favorite ones to order (and they are for sure my husbands favorite!)

If you’re craving a bit of the beach, sun and tropical vacation vibes, then make yourself a Mai Tai at home! Close your eyes and pretend you’re at a swanky resort with a waterfall in the distance while you enjoy this tropical Hawaiian cocktail.

What’s in a Mai Tai Cocktail?

A Mai Tai is a rum based cocktail that’s associated with tiki-themed restaurants, Polynesian Culture, and Hawaii. The funny part it that the person who claims to have invented them created them for his restaurant in California.

A classic Mai Tai is a tart and strong cocktail, with a prominent rum flavor and a bit of orange and lime flavor on the backend. It’s not a particularly sweet cocktail, although you can change up the flavors a bit to your liking.

There are SO many different versions of Mai Tai out there and I’m going to share some of them with you today. I’ll explain not only what goes into this drink, but also how to vary my cocktail into your own Mai Tai Recipe, depending on your tastes or what alcohol you have on hand.

The Classic Mai Tai Ingredients has 3 kinds of rum in it: light, gold, and dark.

I told you it’s a strong drink! Three kinds of rum pack a punch.

I’m sure that a purist would tell you you HAVE to buy top shelf rum (and, honestly, it probably tastes better with more expensive rum) but get what you like or what you want to spend.

I do recommend Bacardi and Meyers for the light/dark but get what you like!

The gold and light rum go in the cocktail mix itself and the dark rum is floated on the top (that’s the dark brown you see in the photos).

You could also use aged rum or Jamaican rum – your choice.

To round out the cocktail you need:

I told you it was a strong drink: all alcohol and a little lime juice!

How to make a Mai Tai?

To make the cocktail, you add all the ingredients (except the dark rum) to a cocktail shaker, shake and pour over ice, then float the dark rum on top.

I’ve listed the ingredients and method for how to make a pitcher in the recipe card. I also think it’s important to add pineapple juice, orange juice, and/or lemon lime soda when doing a pitcher cocktail.

If you don’t have a well stocked liquor cabinet like I do, you can definitely make some substitutions

Orgeat is basically an almond flavored simple syrup. You can get it at the liquor store or at some grocery stores in the alcohol aisle. You can also make your own, but it’s kind of an involved process.

I substitute a bit of Amaretto (almond liqueur) for the orgeat called for in a tradtional Mai Tai recipe, but almond liqueur isn’t something everyone has. It also depends on the sweetness level you like. Here’s what to substitute:

Want to make punch for a crowd? You can do that too! This is where you’re going to want some pineapple or orange juice to fill in the gap. Making punch out of just a classic mai tai recipe would be very expensive!

I love serving Mai Tai Punch at summer pool parties and I can’t wait to have a BBQ so I have an excuse to make it.

To me, a mai tai tastes like Hawaii! It has all those tropical flavors you expect when you’re at the beach. I always substitute amaretto for the orgeat and it adds a nice little touch of sweetness. This cocktail recipe, as written, is really strong. If you want it less so, add pineapple juice.

Is mai tai from Thailand?

Nope – people think so because of “tai” in the name, but it was actually invented by Victor J Bergeron, the founder of Trader Vic’s restaurant.

What type of rum is used in a mai tai?

Can I make a Mai Tai with pineapple juice?

To make this recipe with pineapple juice, just add it to taste, or reduce the triple sec and add pineapple juice instead. Adding juice is a great way to water down this strong drink. 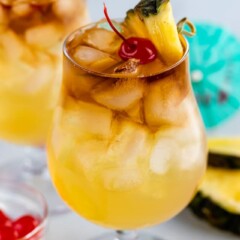 5 from 15 votes
This Mai Tai is such a classic cocktail recipe with 3 kinds of rum, lime, orange and almond. It's the perfect way to transport yourself to the beach!
Prep Time 5 minutes
Total Time 5 minutes
Yield 1 cocktail
Serving Size 1 cocktail
Save RecipeSaved!Rate RecipePrint Recipe

The Mai Tai is one of the most famous cocktails associated with Hawaii, summer and the beach! Make my classic Mai Tai Recipe at home so you can feel like you’re in the tropics.