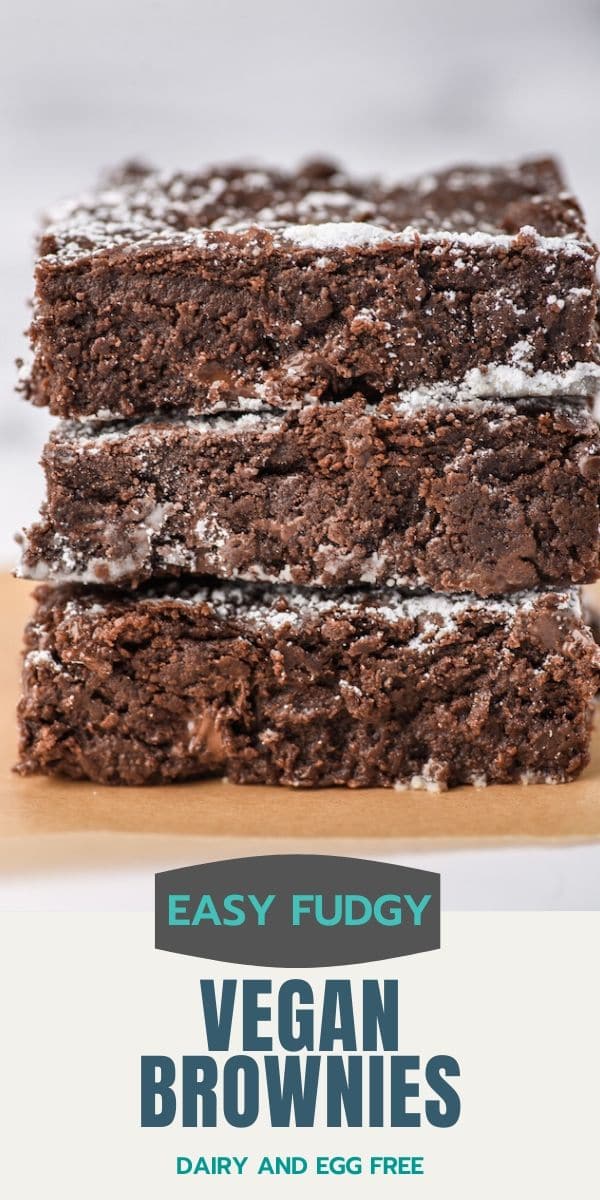 Vegan Brownies are so rich and fudgy! These brownies are made with applesauce instead of eggs but you’d never guess – they are just as decadent as regular brownies.

BONUS: you only need one bowl to make them and you can also make them gluten-free.

I like to keep a few vegan dessert recipes up my sleeve because you never know when you might be making dessert for someone following a vegan diet. So, while I might not do vegan baking on a regular basis, I do have a few recipes I pull out when I need them. Case in point: vegan brownies. They’re rich, they’re fudgy, they’re SO GOOD. You’d never guess that they’re made with applesauce instead of eggs.

The first time I made this vegan brownie recipe was several years ago for a school cookie exchange I organized for the teachers. I wanted to make sure everyone would enjoy the exchange so made a batch of these fudgy brownies. Since then, they’ve been my go-to when I need a chocolatey vegan treat!

They are made with a lot of the same ingredients as regular brownies with a few key exceptions.

Traditional brownies have a rich and fudgy texture which is created by the butter and eggs in the batter, which, of course, aren’t vegan ingredients. The good news is you can achieve that same brownie texture using applesauce and oil instead. And it really works!

So, instead of using eggs in brownies you can use applesauce – this is great for people who have egg allergies, too.

It’s easy to make these gluten-free, too! I like to use Bob’s Red Mill Gluten-Free 1:1 AP Flour (in the light-blue bag!).

Preheat your oven to 350°F. Line a 9×9” baking dish with foil and coat it with cooking spray.

Combine the oil and sugar in a large bowl. Add the vanilla, cocoa, applesauce, melted chocolate and salt and stir. Slowly add the flour and then fold in the chocolate chips.

Bake the brownies for 25 to 28 minutes – cool them in the pan before slicing.

I also like to dust the cooled brownies with some powdered sugar for a pretty presentation.

These Vegan Brownies have the Best Fudgy Texture!

In case you’re wondering – no, you can’t taste the applesauce in the brownies! All it does is magically give the brownies a fudgy texture.

They also have a rich chocolate flavor – a lot of recipes only have cocoa powder, but my recipe has melted chocolate, too, which really amps up the richness. The extra chocolate chips, don’t hurt either!

What I think I love best is that you’d never guess they are vegan. They taste just like regular brownies and that’s not just me – they always get rave reviews. Enjoy! 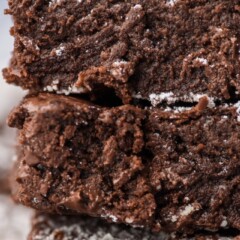 4.34 from 3 votes
You will never know these are egg free brownies! These are still rich and fudgy, but made with applesauce instead of egg – the perfect vegan dessert recipe.
Prep Time 15 minutes
Cook Time 25 minutes
Total Time 40 minutes
Yield 9 brownies
Serving Size 1 brownie
Diet: Vegan, Vegetarian
Save RecipeSaved!Rate RecipePrint Recipe

You will never know these are egg free brownies! These are still rich and fudgy, but made with applesauce instead of egg – the perfect vegan dessert recipe.