If you’re looking for a special breakfast recipe for the holidays this Cinnamon Roll Coffee Cake is one to try! You don’t have to choose between cinnamon rolls and coffee cake – you can serve both. Homemade coffee cake is baked inside a Pillsbury cinnamon roll “crust” and the whole thing is ready to go in the oven in about 15 minutes! This coffee cake pie is perfect for all of your special occasion breakfasts and brunches.

You might be wondering: Is it a coffee cake? Is it a batch of cinnamon rolls? What is a Cinnamon Roll Coffee Cake, anyway? Let me explain.

Although we are making the coffee cake from scratch – it’s the same easy base recipe I’ve used to make my pumpkin coffee cake and carrot cake coffee cake – we’re taking a short-cut with the rolls and using store-bought cinnamon roll dough. So, if you were worried this was an all-day project let me assure you it’s not. You only need one bowl to make the coffee cake batter and, once you make it, you just have to assemble and bake it.

Some people call this coffee cake pie or cinnamon roll coffee cake pie, but I just think of it as the ultimate holiday breakfast or brunch treat. You don’t have to choose! You can have your coffee cake AND your cinnamon rolls in one amazing dish. Plus, your house will smell delicious while it’s baking. Is there anything better than the scent of cinnamon wafting from the oven in the morning?

You only need one ingredient for the cinnamon roll crust: one 8-count can of cinnamon roll dough. You know, the kind that comes with the icing?

How to Make Homemade Coffee Cake

My favorite coffee cake recipe is my mom’s and it works perfectly for this cinnamon roll coffee cake. Here are the ingredients you’ll need:

Grab a medium-sized bowl and combine all of the ingredients together. There shouldn’t be any lumps. Pour the coffee cake batter over the cinnamon rolls in the pie pan.

The last step is the topping – just combine brown sugar, cinnamon and melted butter together in a small bowl. Sprinkle the mixture over the top of the coffee cake batter.

Pop the Cinnamon Roll Coffee Cake in the oven and bake it for 30 minutes at 350 degrees. You know it’s done when a toothpick comes out just shy of clean.

I can’t resist that packet of icing that comes with the cinnamon rolls. Is anyone else addicted to it, too? So, of course, I drizzle it over the warm cinnamon roll coffee cake as a final sweet touch.

What can I serve with this cinnamon roll coffee cake?

If you’re serving this cinnamon roll coffee cake as a part of a bigger breakfast or brunch you might like serve these other dishes with it!

You don’t have to choose between cinnamon rolls and coffee cake – you can serve both. Homemade coffee cake is baked inside a Pillsbury cinnamon roll “crust” and the whole thing is ready to go in the oven in about 15 minutes! This coffee cake pie is perfect for all of your special occasion breakfasts and brunches.
Prep Time 20 minutes
Cook Time 30 minutes
Total Time 50 minutes
Yield 8 servings
Serving Size 1 slice 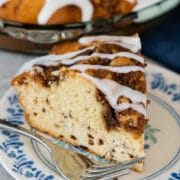 You can also make this in a 9×13-inch pan. Spray it with cooking spray and just put the flattened cinnamon rolls on the bottom of the pan (not up the sides). Bake time will be about 20-30 minutes.

This is the perfect mashup between coffee cake and cinnamon rolls! Using canned cinnamon rolls for a crust, this recipe is like a breakfast pie – and it’s so easy to make!