This short-cut blueberry cinnamon roll casserole is so easy to make with just four ingredients! It’s made with Pillsbury cinnamon rolls so it’s super simple to whip together for a special breakfast – you can make this in just minutes!

It’s always good to have a few quick breakfast casseroles up your sleeves to pull out for special breakfasts for the holidays or other special occasions and I’ve got a great one for you today. For this cinnamon roll casserole, you only need four ingredients to make it, 10 minutes to prep it and it only takes about 30 minutes to bake.

I have a similar recipe you can make in your slow cooker – my crockpot cinnamon roll casserole – but sometimes it’s nice to crank up the oven on a cold morning, so I wanted to share an oven version, too! When you pull this bubbly hot breakfast bake out of the oven everyone will think you got up at the crack of dawn to make it, but it’s okay – your secret is safe with me.

I love short-cuts in the kitchen, don’t you? Yes, sometimes it’s nice to make something totally from scratch, but when times are busy, I love semi-homemade recipes like this breakfast casserole.

The secret short-cut ingredient is Pillsbury cinnamon rolls – it makes this breakfast bake so easy, but it’s hard for people to tell because we’re doctoring it up with some other ingredients like fresh blueberries and a sweet topping. Pillsbury rolls are one of my favorite kitchen hacks – there are so many ways to use it.

So, I’ve already spilled the beans about the secret ingredient – all you need are three other things and you’re ready to make this blueberry breakfast casserole:

How to Make Cinnamon Roll Casserole

Divide the Rolls: Pop those cinnamon rolls out of the can and divide each into six pieces. Set the icing aside – you’ll use it after the casserole is baked.

Make the sauce: Combine the brown sugar and melted butter in a small bowl. Pour the mixture over the top of the blueberries and cinnamon rolls.

Bake: Bake the casserole at 350°F for 25 to 35 minutes or until it’s golden brown and the cinnamon rolls are cooked through. Drizzle the icing over the hot casserole and serve!

Can I use fresh or frozen blueberries?

You can use either fresh or frozen berries for this casserole. If you use frozen blueberries be sure to thaw them first – there a couple of ways to do this:

Can I use other types of berries?

Yes, if you want to switch it up try using different kinds of berries, or try a combination! Strawberries, blackberries, and raspberries will work great. Just follow my tips if you’re using frozen ones.

Can I make this breakfast casserole ahead?

This blueberry casserole is so quick, I usually just make it the morning I want to serve it. But you can assemble it the night before and keep it in the refrigerator. Because the rolls will soak up more of the butter-sugar mixture, I like to wait to pour this mixture over the top until right before I bake it.

Ways to Use Pillsbury Cinnamon Rolls

Like I mentioned, I love using Pillsbury cinnamon rolls to make all kinds of dishes – there are so many creative ways to use it! I’ve used them to make muffins, pull-apart bread, sweet rolls, monkey bread… the list goes on and on so here are a few of my favorites – you have to try these, too!

Now I have this blueberry cinnamon roll bake to add to the list! It’s a keeper, for sure – I mean, what’s not to love about warm cinnamon rolls with sweet berries and a sugary topping? There’s nothing better than pulling a hot bubbling breakfast casserole out of the oven for a special breakfast.

When do I chop the cinnamon rolls?

Remove them from the can then dice them up.

Yes I’ve assembled it all the night before – and then add the butter mixture the morning of and bake.

Serve this Cinnamon Roll Bake alongside these other brunch favorites: 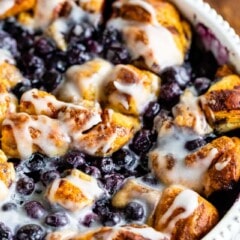 Use fresh or frozen blueberries. If using frozen, make sure to thaw and drain before using in casserole.