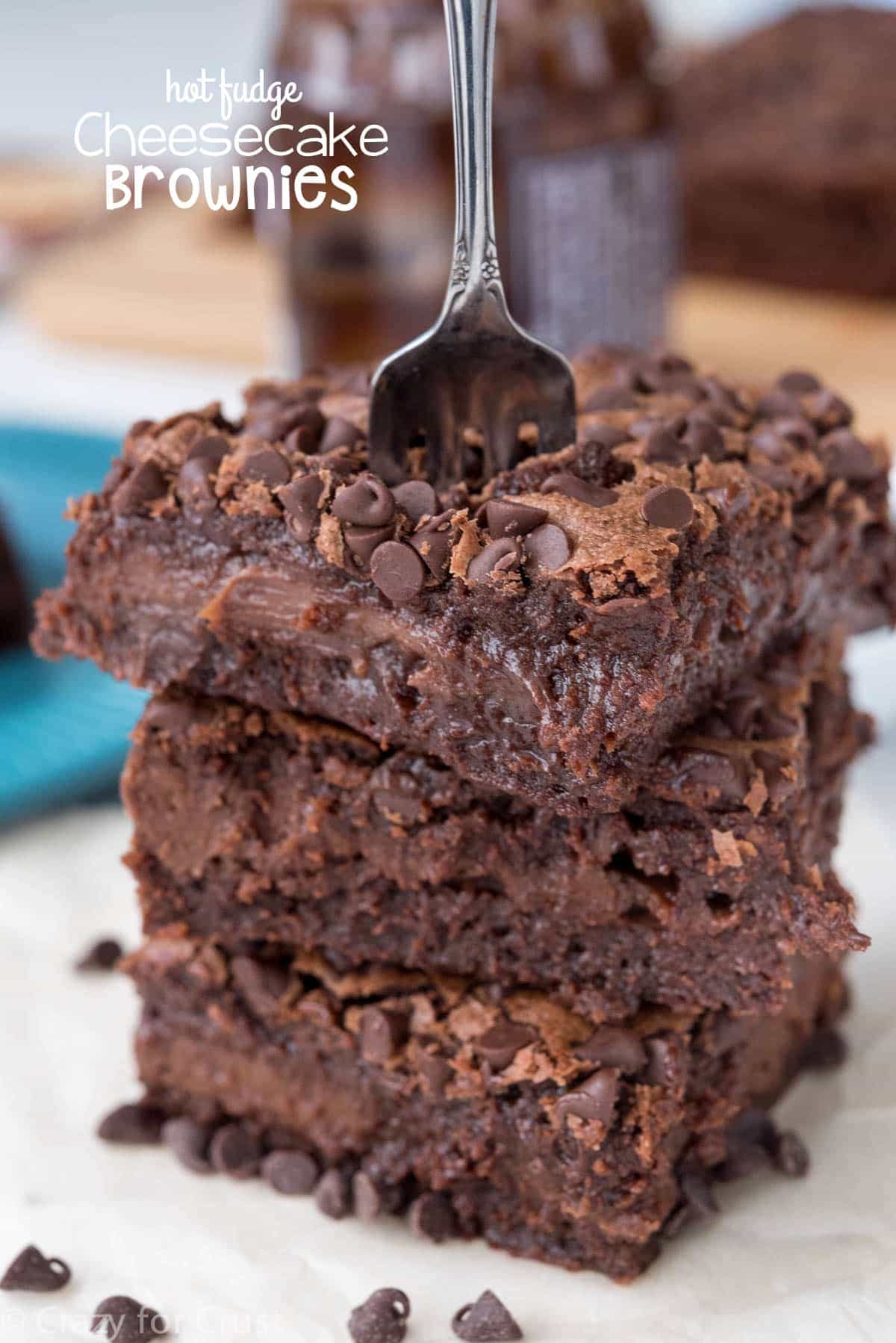 This recipe is why I have so much trouble eating healthy. Lord help me, these Hot Fudge Cheesecake Brownies are a chocoholics dream!

It was fun to go and see some of my friends I haven’t seen in over 10 years. We had dinner with my oldest friend and her husband, which was nice. We hardly ever get to see them but it’s the kind of relationship that you just fall back into, even after a year of not talking.

I don’t know what I was expecting, but really the reunion was just like high school except everyone was older, overdressed for the bar it was held in, and alcohol was served. (Although that last one happened often in high school, if I’m being totally honest…) I hung out with my handful of friends, watched the popular crowd make the rounds, not knowing who I was. Really, in 20 years, nothing changed except the women dye their hair and look pretty much the same and the men are mostly bald.

The hard part about the reunion for me came after it was over. I got a little melancholy thinking about all the friendships I had back then and where they are today. I really did not enjoy high school; my main memories of it are torturous. But my friends were my lifeline, my existence, my soul. And it’s kind of sad to see that, in most cases, neither side thought to keep them in tact. Really lets you know that all teenage angst and drama really doesn’t translate to the “real” world. 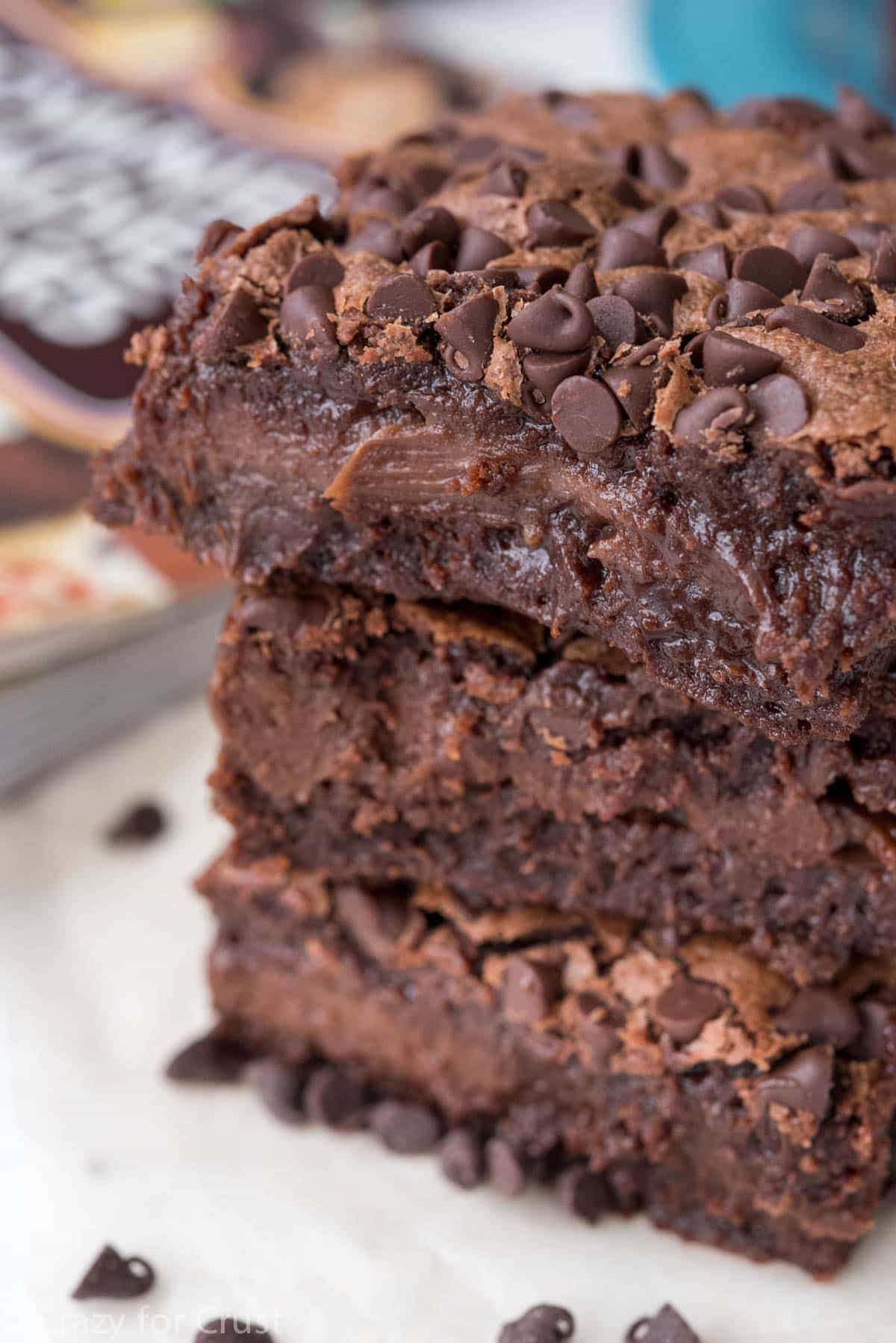 As an adult, it’s very hard for me to retain good friendships. I’m an introvert at heart and a homebody and Mel and I pretty much keep to ourselves. I’m horrible keeping up with the mom friends down the street, let alone people who live hours away that I knew 20 years ago.

The one batch of friends these days that’s easiest to keep up with? The ladies I’ve met through blogging. I value all of my friendships, but the blogging ones are sometimes the easiest. We live similar lives, chained to our computers and iPhones and kitchens, living this frantic owning-your-own-business existence. Plus, we’re on social media 24/7, so at any time of day I’m in the middle of 3 Facebook messenger conversations that turn into 3-day long chat sessions.

These “blogging” friendships make me especially happy when one of us has exciting things happening: new homes, new loves, new babies, new cookbooks. Which leads me to this recipe today: Hot Fudge Cheesecake Brownies.

This amazing, decadent, rich chocolate brownie recipe that’s filled with hot fudge cheesecake comes from my favorite new cookbook Brownies Blondies and Bars by my friend Stephanie Brubaker from Back for Seconds.

You guys. This cookbook is SO gorgeous. The recipes? Holy cow. All my favorite things (blondies and brownies!) in one place. 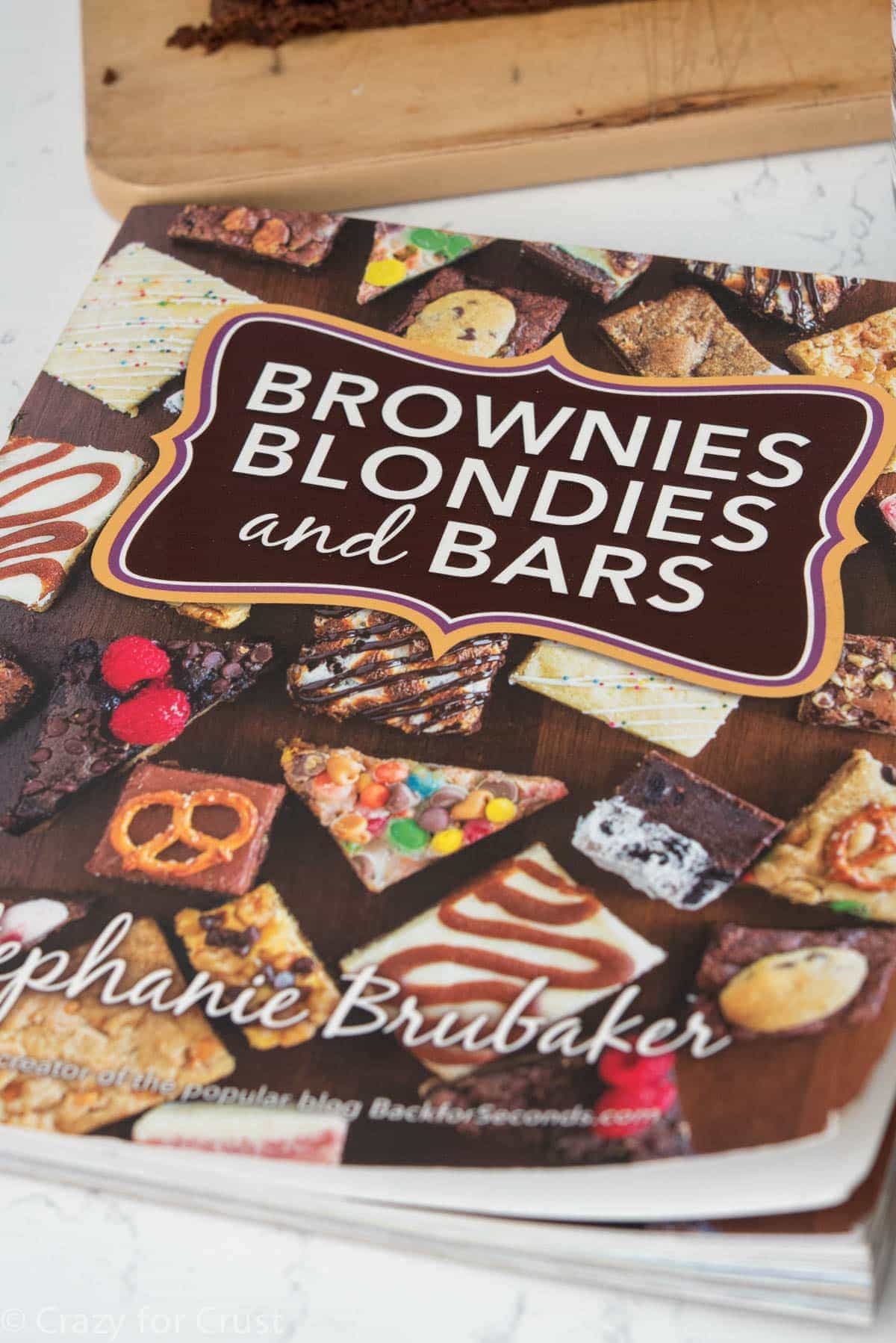 This book is full of every kind of blondie or brownie recipe you can think of. Chocolate, vanilla, lemon, caramel, peanut butter, you name it, it’s there. When I saw the recipe for the Hot Fudge Peanut Butter Cup Cheesecake Brownies I knew I had to make them. I decided to leave off the peanut butter cups (why? I don’t know) and make them a truly chocolate lovers delight.

This recipe couldn’t be easier to make, even though you have to use two bowls to make it (one for the brownies and one for the cheesecake). But you guys, the extra bowl is SO WORTH IT. I mean, LOOK:

The rich from scratch brownie is super fudgy and dense. It’s made with two kinds of chocolate (chips and cocoa) and it’s so thick. I love me a thick brownie batter because you just know it’ll be fudgy and perfect.

I’m being serious here – this recipe goes in the BEST BROWNIE category. I give it 5 stars and a blue ribbon. I know you will too, and you must make them ASAP. 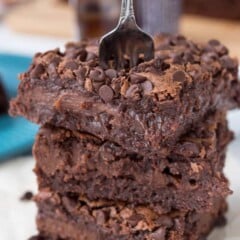 4.26 from 51 votes
These Hot Fudge Cheesecake Brownies are a decadent easy brownie recipe filled with hot fudge cheesecake. These are for chocoholics only!
Yield 1 - 9x13 pan
Save RecipeSaved!Rate RecipePrint Recipe 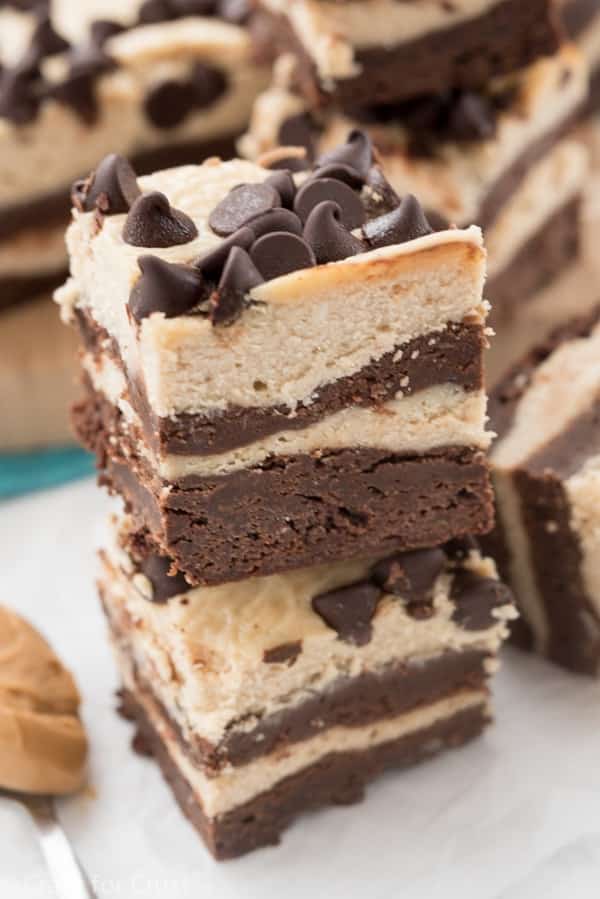 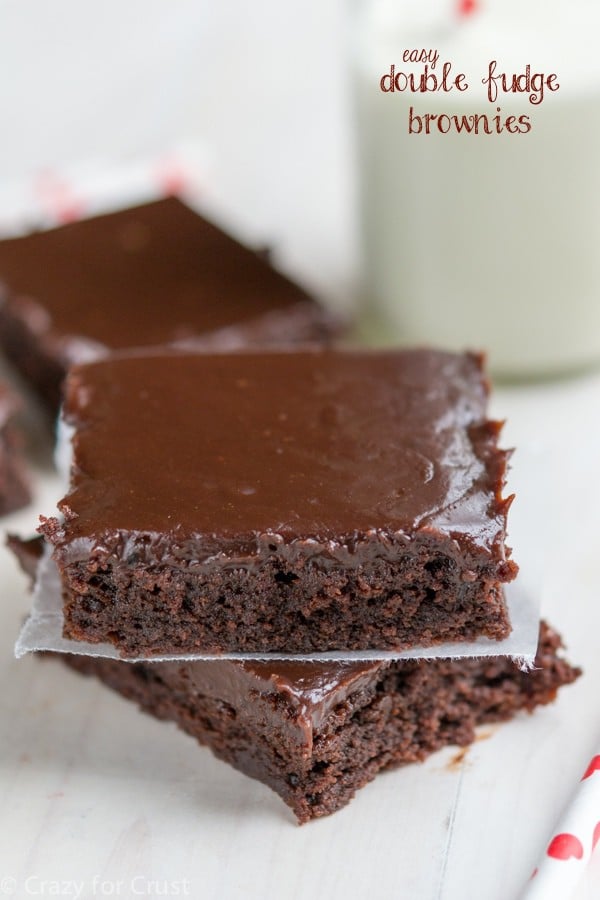 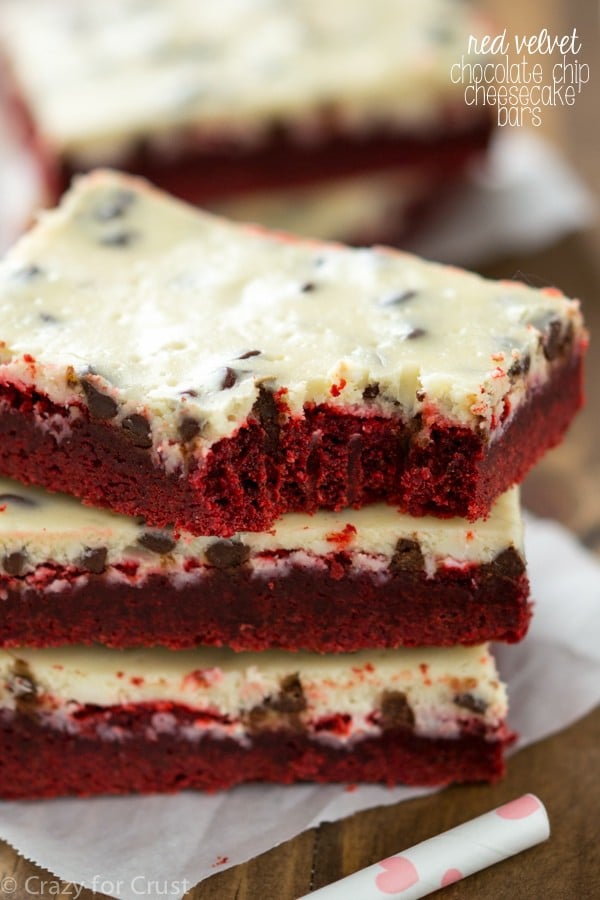