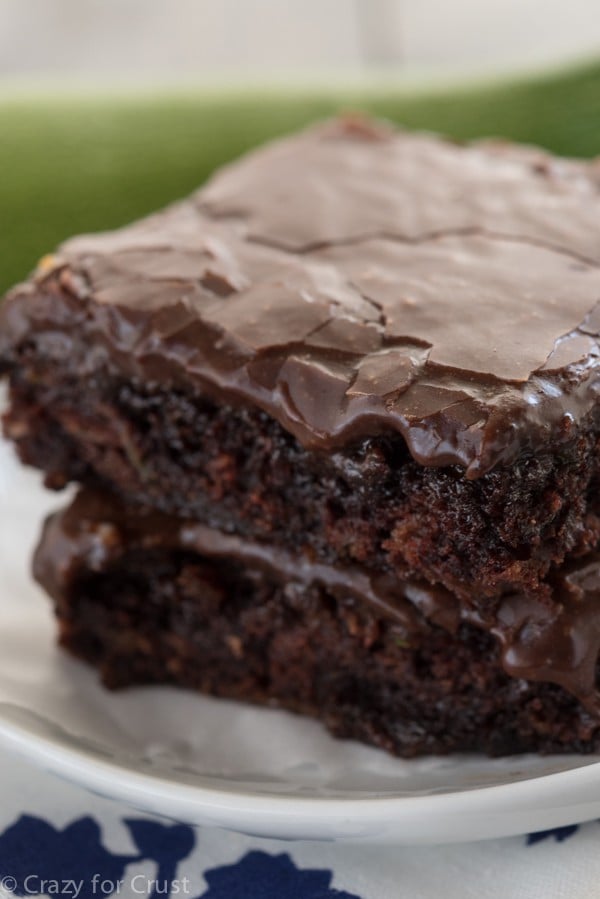 Zucchini brownies are a healthier recipe for brownies, and these are the BEST zucchini brownies ever! They’re ooey, gooey, and SUPER fudgy brownies. And NO one will know they have zucchini inside!

Yes, it is another zucchini recipe. I know, you’re probably yelling at the computer chanting “No more zucchini…NO MORE ZUCCHINI…”

Think of how I feel? At one point I think I had seven ginormous ones in my crisper drawer. Unfortunately, two didn’t make it through. When you get a pile of veggies that just keeps growing…things get forgotten underneath.

Alas, only one is left. I haven’t had to buy zucchini for dinner in over a month. In another few weeks, I’ll be grumbling at the prices and wishing I wasn’t having to buy it to make these zucchini brownies again.

Because, my friends, I will be making these zucchini brownies again. They are delightfully fudgy, due in part to the chocolate frosting on top.

These brownies are addicting and so good. They’re gooey, fudgy, and super chocolaty…and they have zucchini in them. So they’re healthy brownies. Practically a vegetable.

I promise you though – NO ONE will guess there is zucchini in this homemade brownies recipe. They taste like the most decadent brownies ever…and it just so happens they’re a vegetable.

When you make the recipe you’re going to think something is strange, because there are no eggs in it. Yes, that’s right, a brownie without eggs. Also, there’s no butter in the brownies, so if you skip the frosting these are vegan brownies.

(Don’t skip the frosting. More on that later.)

The recipe calls for water as an additional binder to the zucchini. How much water you add will vary depending on your zucchini. If you have a very wet zucchini, you may not need as much water. Add a tablespoon at a time and stop adding once the mixture JUST comes together and is no longer powdery. It is a very thick dough, almost like cookie dough. This batter is not a traditional brownie batter consistency.

Just go with it.

Let’s talk about frosting. My Grandma (my mom’s mom) used to make the best vanilla frosting. It was smooth and soft and got kind of crunchy after sitting on the cake. Problem was, my Grandma never measured. So no one was really sure how she made her wonderful frosting. Then I made these brownies and I think I’ve figured out her secret: melted butter. I can’t wait to experiment more to see if I can make the frosting from my memories.

Now you pretty much know the secret to the ooey gooey chocolate frosting. It’s cocoa, melted butter, milk, salt, and vanilla. No mixer even needed, just use a whisk! Pour it over the cooled brownies and let it semi-set. This frosting stays gooey and wet with a teeny hardening on the top.

I could drink the stuff.

I call these zucchini brownies “fork brownies”, because they’re so gooey you need a fork. #worthit

I hope you enjoy these as much as I do! I apologize in advance if you end up spending to much at the grocery store because you’ve run out of zucchini in your garden. They are that good. 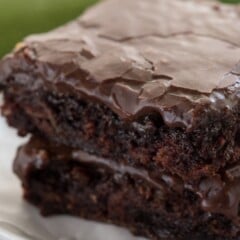 4.84 from 77 votes
Save RecipeSaved!Rate RecipePrint Recipe

Want more delicious brownie recipes? Come on, you know you do.