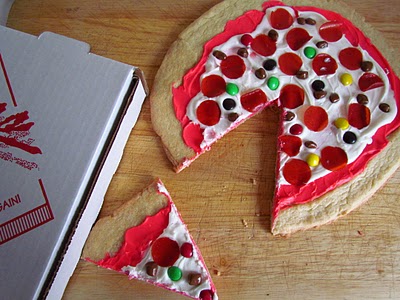 When I was a kid I hated April Fool’s Day. I was always worried that someone would play a joke on me. I did not (nor do I now) like being the butt of a joke or being made fun of. Kids can be mean.  However, Jordan, at 6, has not had the pleasure of being pantsed in a locker room full of girls, so April Fool’s Day is awesome for her. She loves joking around. She’s definitely her daddy’s little girl. Last year we froze orange juice in her glass and topped with just a few sips of regular juice so she couldn’t drink it. She loved it. And, she has also informed me I can’t do that again, since it’s already been done.  So, what’s a baker to do on April Fool’s Day? “Fake bake” of course! 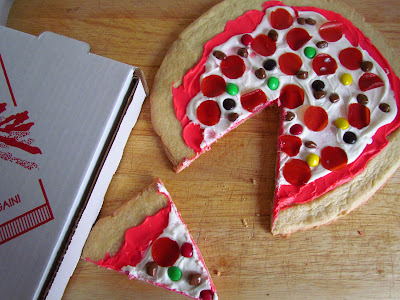 This is a super easy prank you can pull on your kids (or anyone actually). The “crust” is a sugar cookie and is topped with frosting and candies made to look like pizza toppings. (Yes, I know the frosting is pink, not red. I used “Christmas Red” from Wilton. I used a lot, and only got hot pink. Later on I was at Michael’s and saw “Red-Red”. Next time I will try that one!)
You can use your favorite sugar cookie recipe or a boxed mix. Choose what size pizza you want and cut it into a large circle. Bake according to the directions of the recipe and let cool completely. The “cheese” is white frosting. (I used canned.) I just melted it in the microwave for about 10-15 seconds and poured it on. For the toppings, just raid your pantry. I found all of mine in Jordan’s treat box. Much of it was from her Valentine’s Day candy. The box came from a local pizza establishment. They gave it to me for free.
The tootsie roll “sausages” were made with mini tootsie rolls. I heated them in the microwave for about 10 seconds until they became malleable. I then rolled them into a long rope and cut little pieces, which I formed into sausage balls. The “pepperoni” are circles cut from a fruit roll. If you don’t have a small round cookie cutter you can use the lid of a water bottle, or just cut triangles. The M&M’s represent bell peppers and olives. The possibilities are endless. Make a ham and pineapple pizza with a pink fruit roll-up and candied pineapple. Tootsie rolls could also be formed in to mushrooms. Let your imaginations run wild!
Serve this fake pizza to your family on Friday and wait for the laughter. It’s SO much better than being pantsed, that’s for sure!
Click HERE for more PIZZA RECIPES!